This week we are featuring Cathryn Kis. Her kindergarten class was learning about insects and decided to spend a day learning about mosquitoes. Below you will find a reflection from Cathryn and images from some of her lessons. 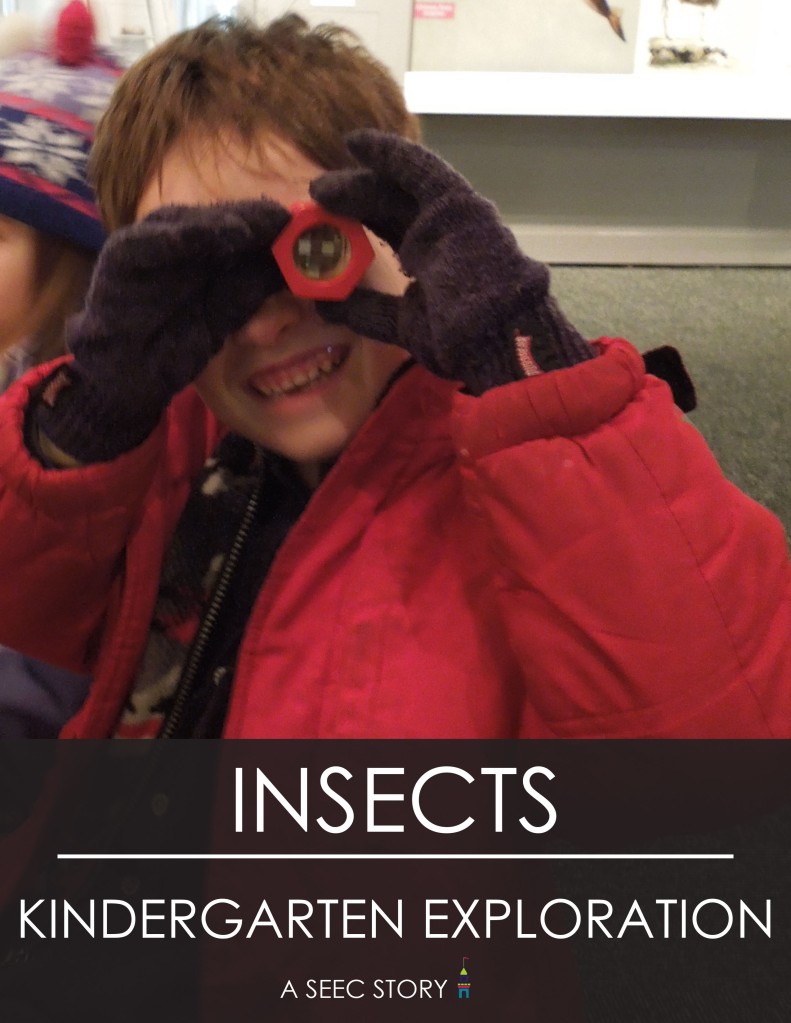 We set out to explore what insects are, what makes an insect an insect, how many insects are in the world and other fun filled facts that caught our curiosity. We worked on defining the characteristics of insects and how they are the same or different. The class was particularly interested in the most unique or dangerous. We had fun using the Insect Hall in National Museum of Natural History (NMNH) as well as Dr. Adamski, an entomologist at NMNH, to get a wonderful hands on experiences with insects.

What I found most successful, was the fact that the children were able to retell the story, put the parts in the correct sequence and have fun doing the activity. They were able to take the information they learned and play a chase game on the playground using the mosquito buzzing sound and acting out some of the other parts of the story.

I might have had an additional set of story cards to sequence. By dividing the class into two small groups, the children would have needed to collaborate and also take on more responsibility in the activity. This may have led to even deeper discussions of the story and given me an opportunity to see which kids needed more practice with this skill. In addition, I think that providing puppets for each character in the story would give the children a wonderful opportunity to become the storyteller for their peers.

If you are planning to use this lesson in a museum I recommend arriving early. At times it was difficult to hear the sound of the mosquito despite the speaker we brought along to use in the space. I also suggest having a hands on specimen of a mosquito to better explore the different parts of the insect.

Here are a few images from their unit on mosquitoes: 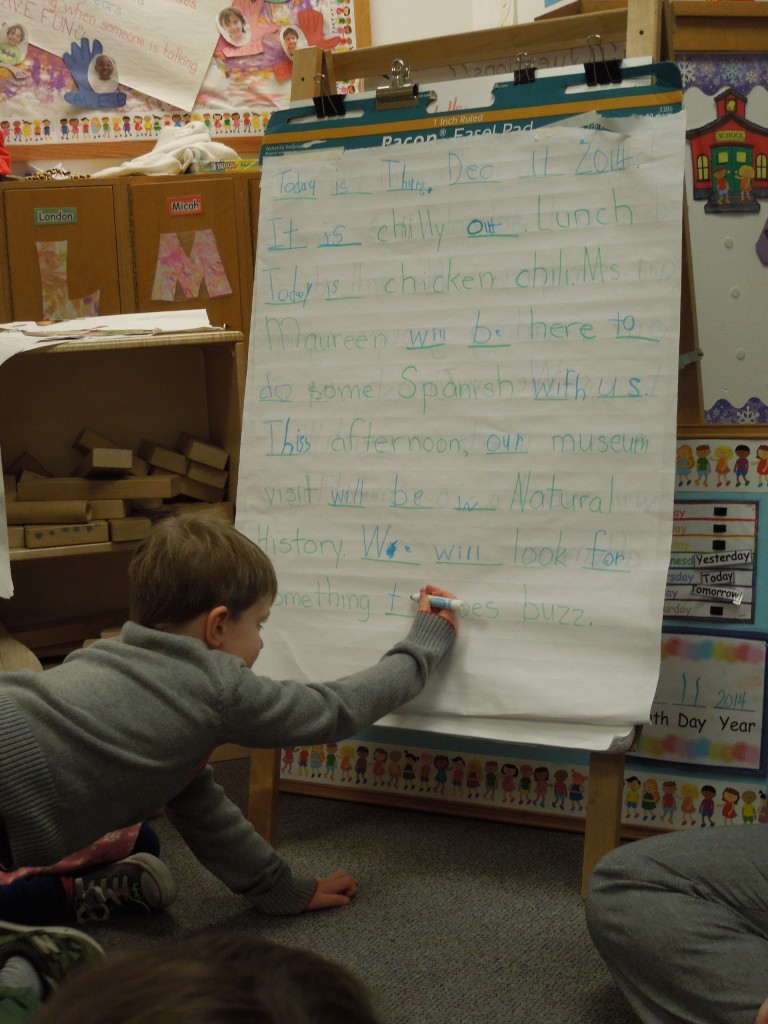 Cathryn began her morning gathering with a fill-in-the blank activity. The chart outlines for the children what their day will look like and also gives them an opportunity to practice their writing. 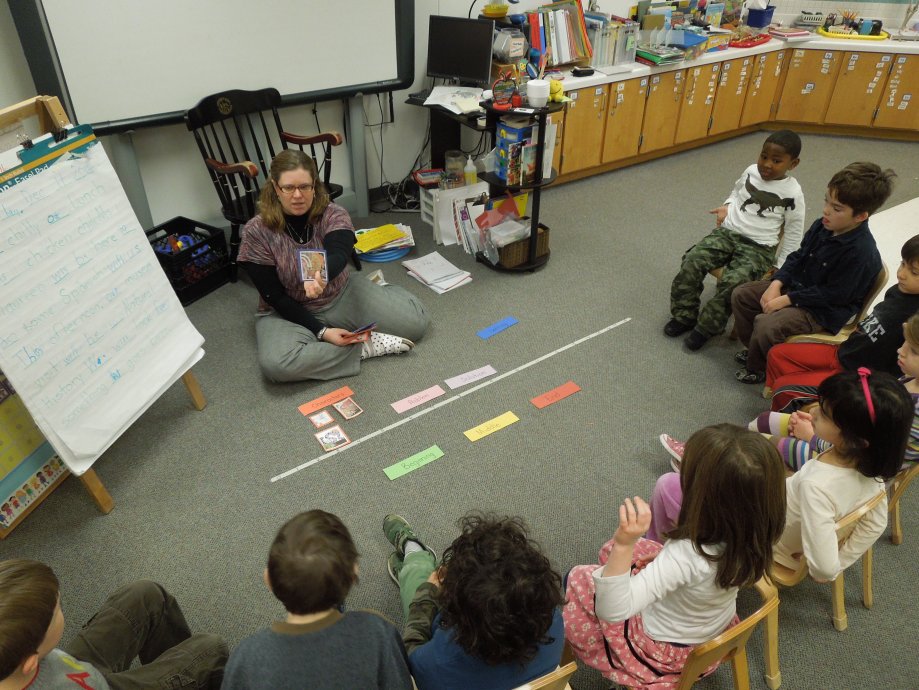 Before the lesson, Cathryn made cards ahead of time that had images of the characters and labels that sectioned the book into categories. The class had been reading Why Do Mosquitoes Buzz in People’s Ears by Verna Aardema so they were familiar with the characters and plot line during this lesson. She asked the group to remind her of the different characters in the story. 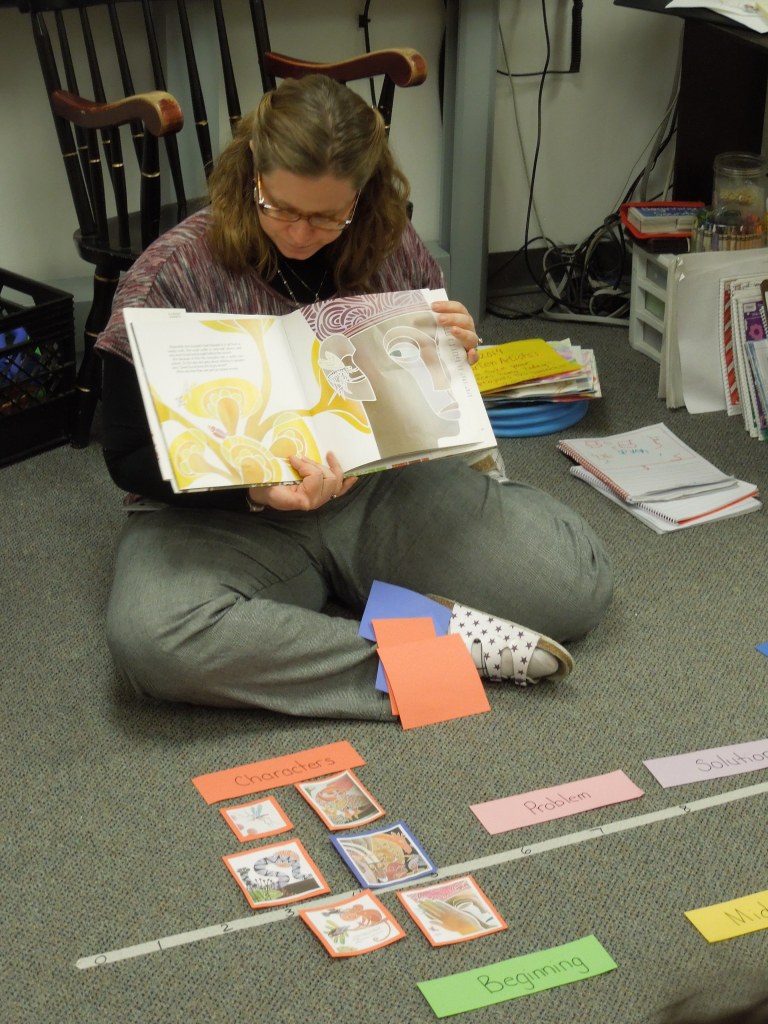 As Cathryn read the story, she worked with the group to move the characters to the different categories. 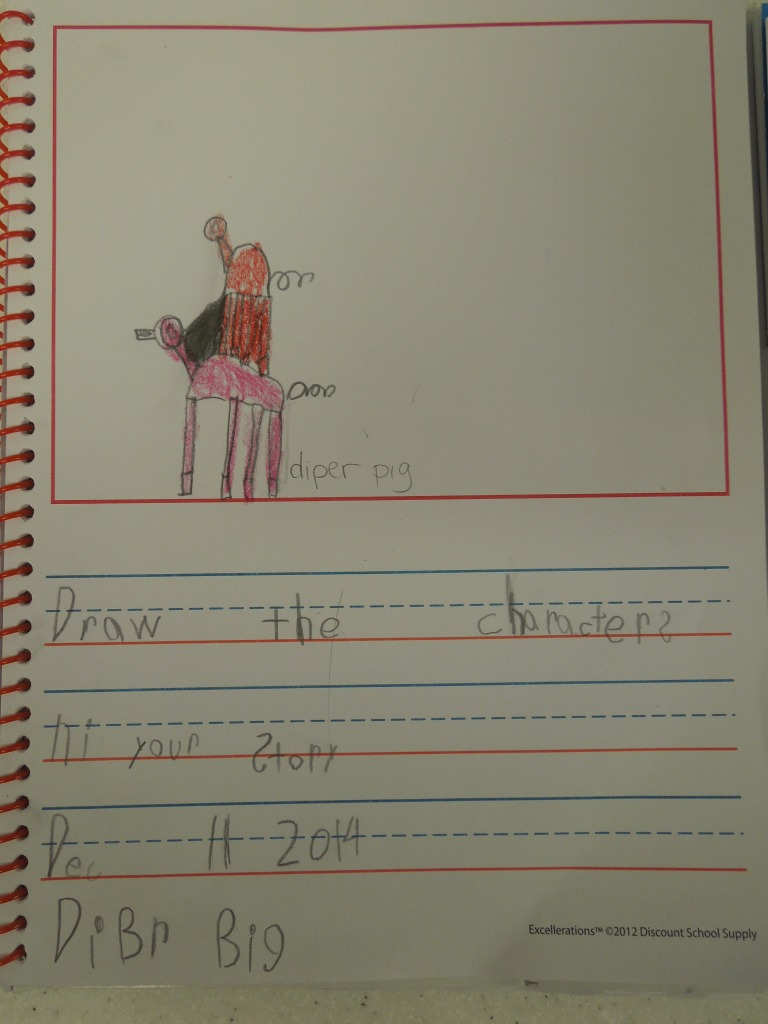 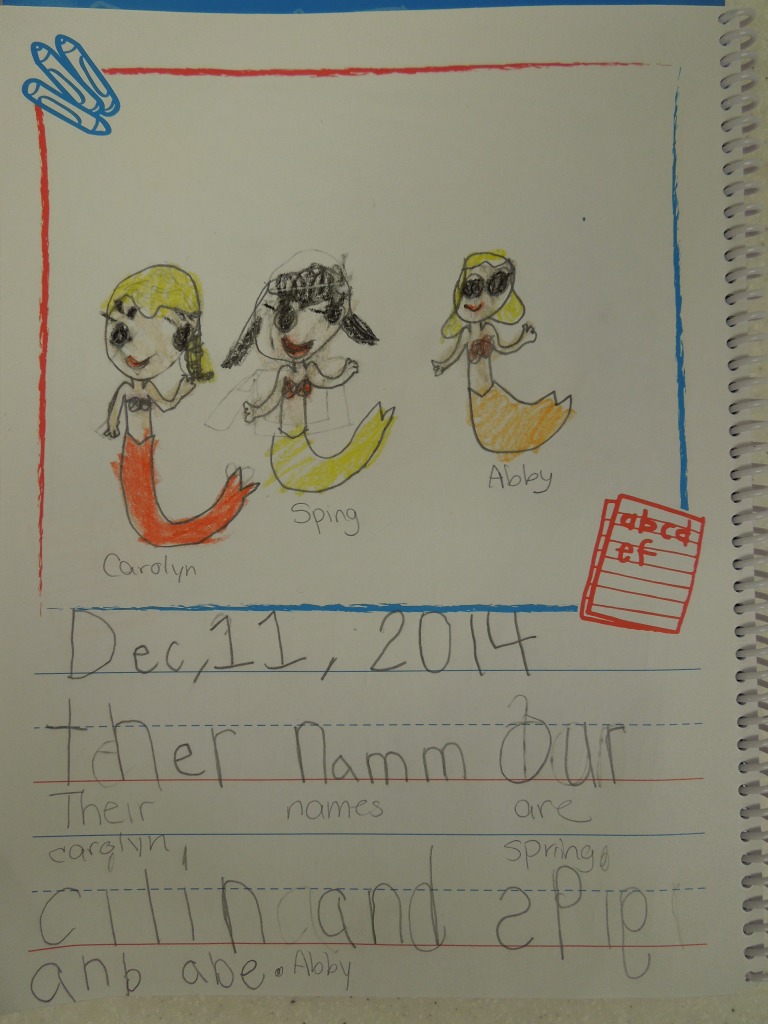 During their journal time she had the students create their own characters to further emphasize the different components of a story. 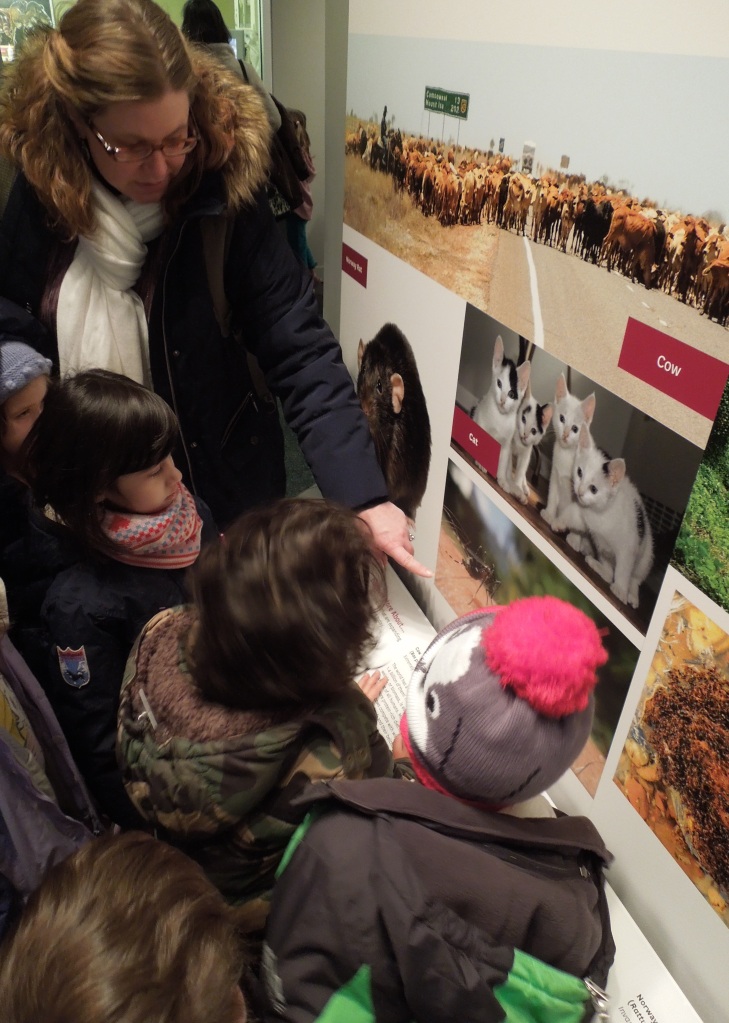 The group headed to the museum in search of a mosquito. They found one in the Last American Dinosaur exhibit located in the National Museum of Natural History (http://www.mnh.si.edu/fossil-hall/last-american-dinosaurs/). 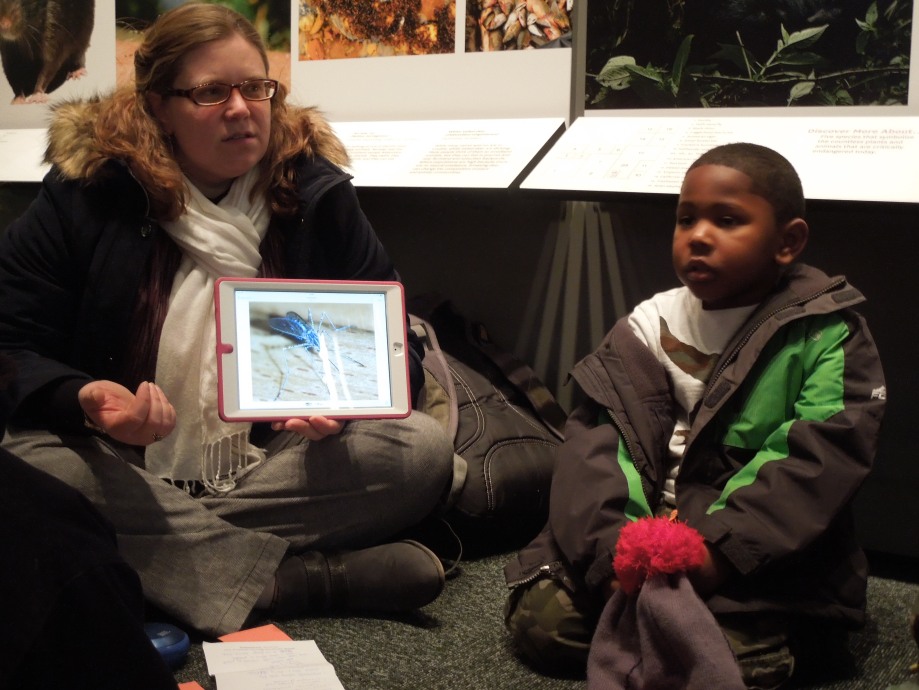 Cathryn showed the group images of the different varieties of mosquitoes and pointed out the parts of their body. 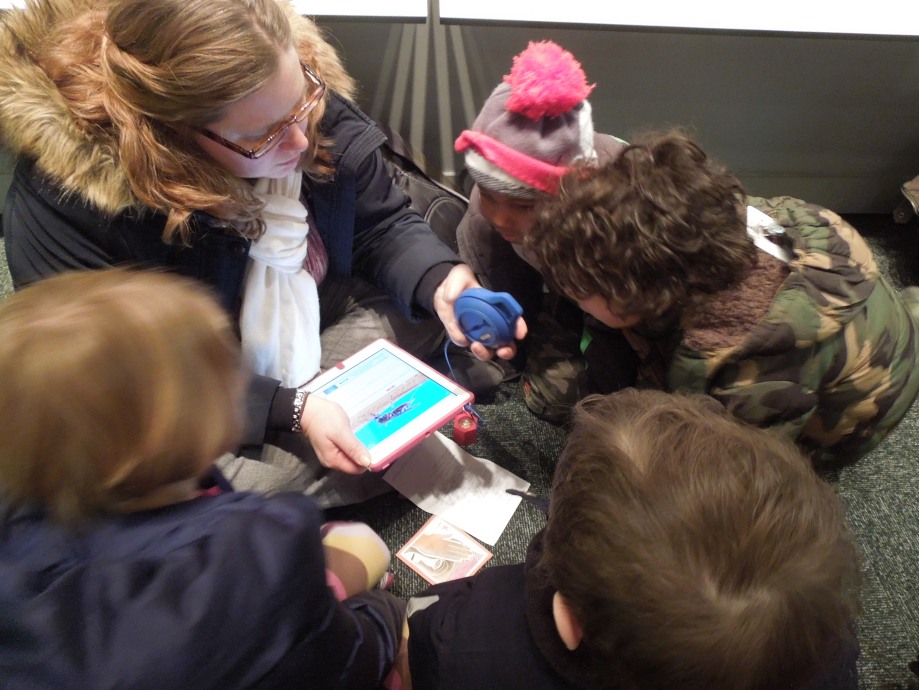 She then had the group listen to the sound that a mosquito makes. 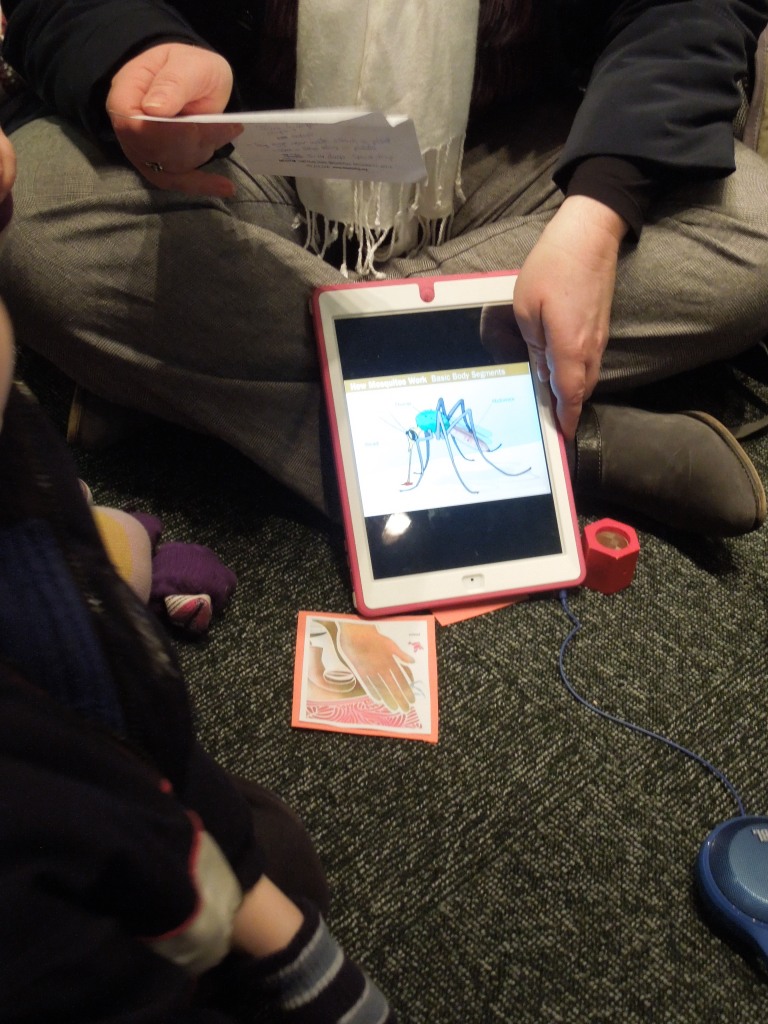 Cathryn also brought along images from the book and had the group think about the differences and similarities between the story and scientific facts about the mosquito. 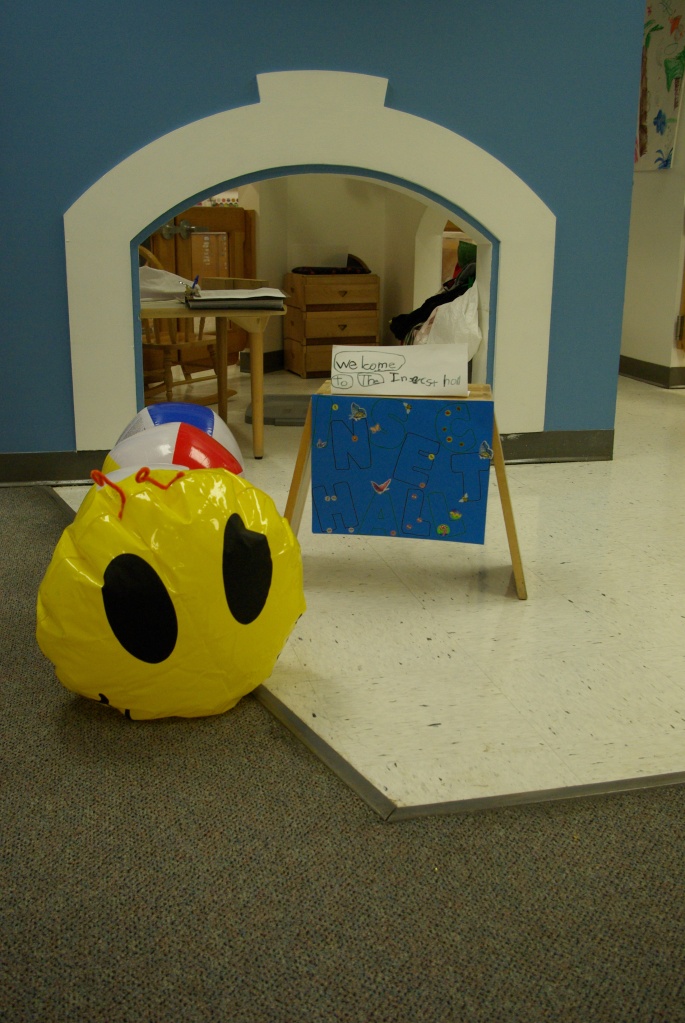 At the end of their unit on insects, the class hosted an exhibit! 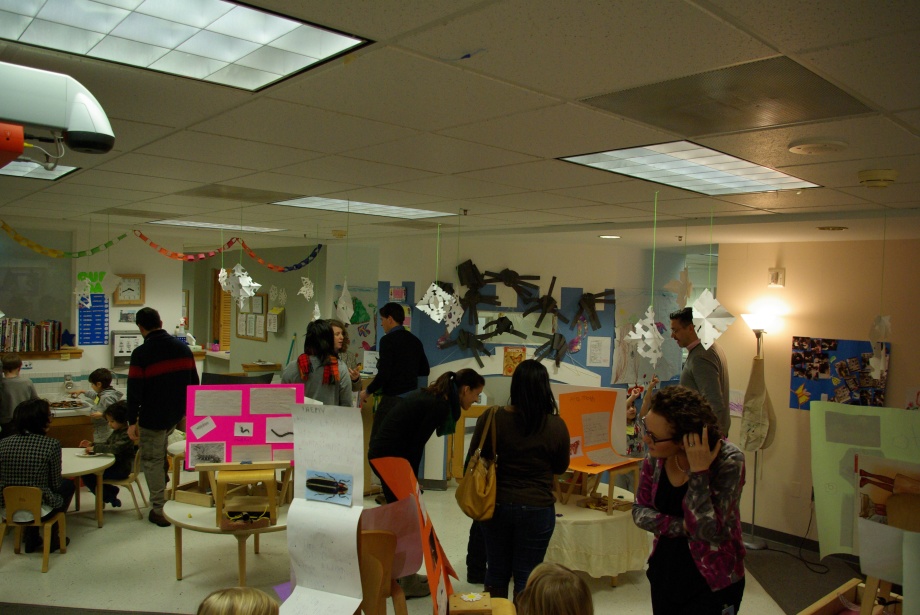 Parents and other educators were invited to visit their version of the insect hall and meet with the student entomologists. 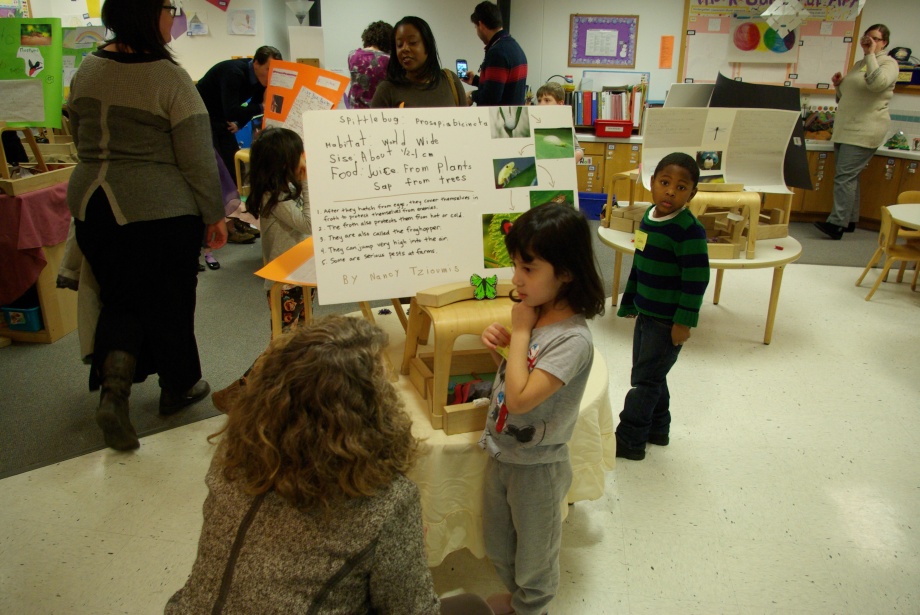 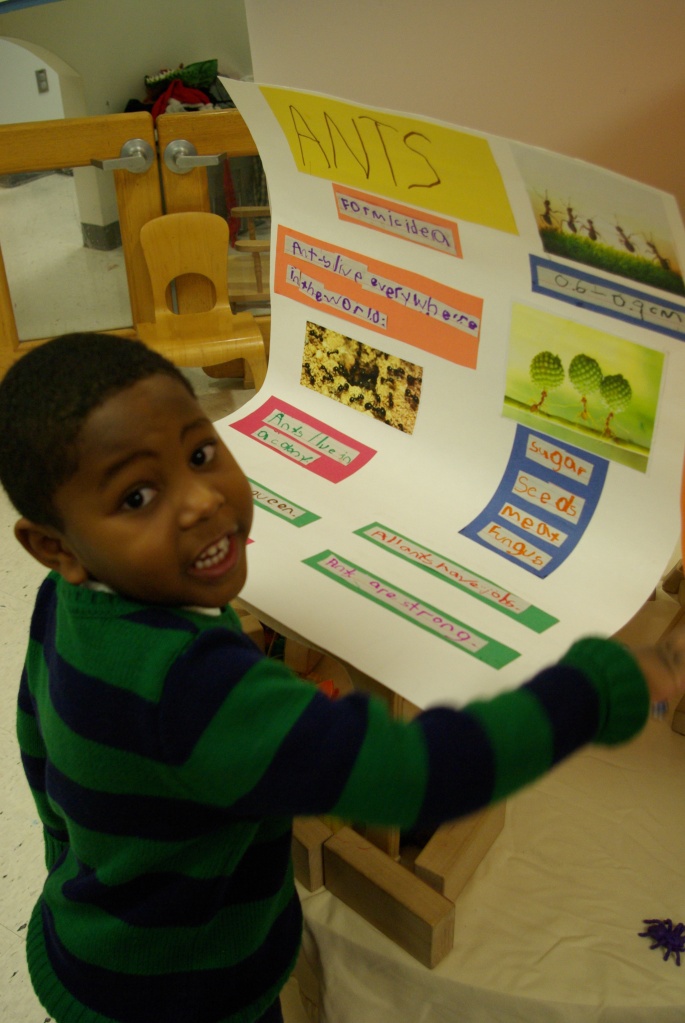 Each child conducted a research project on a particular insect and was available to relay that information to visitors. 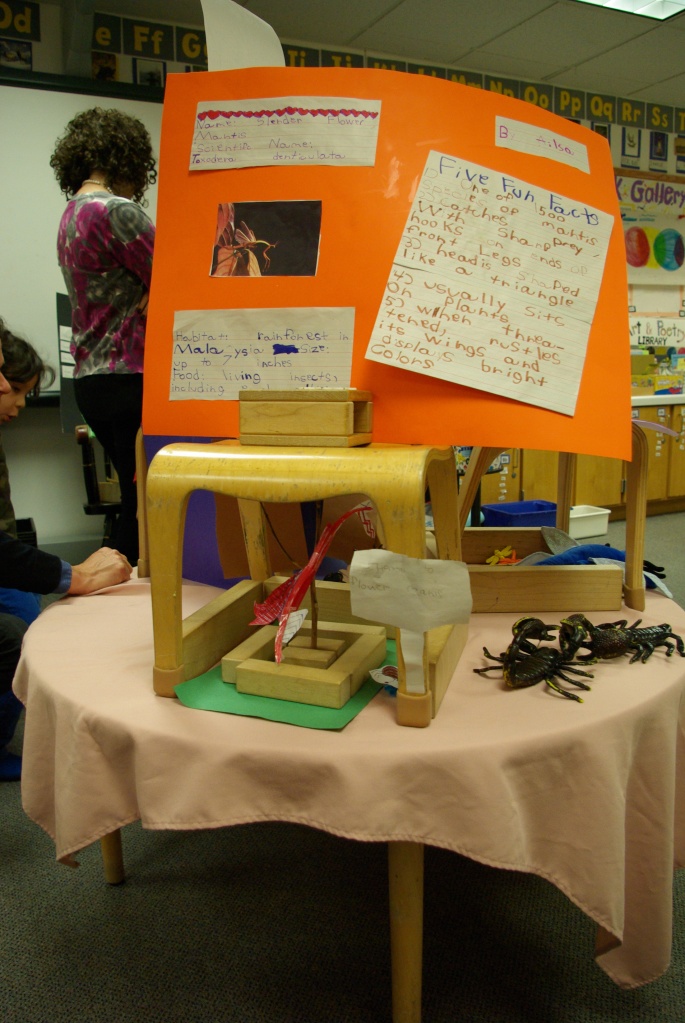 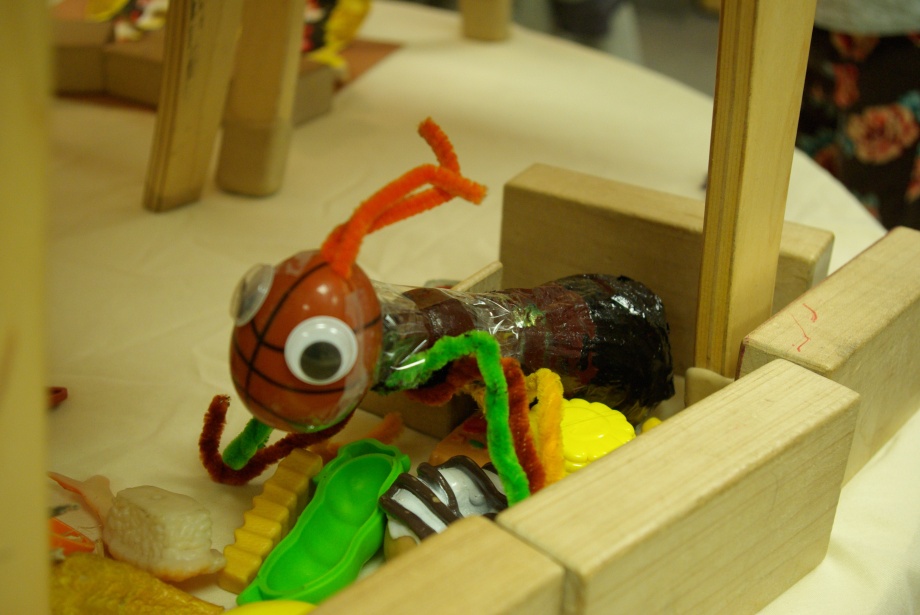 They also created 3-D models of their insect. The models were housed in their “enclosures” which often featured the types of food and habitat of that insect. 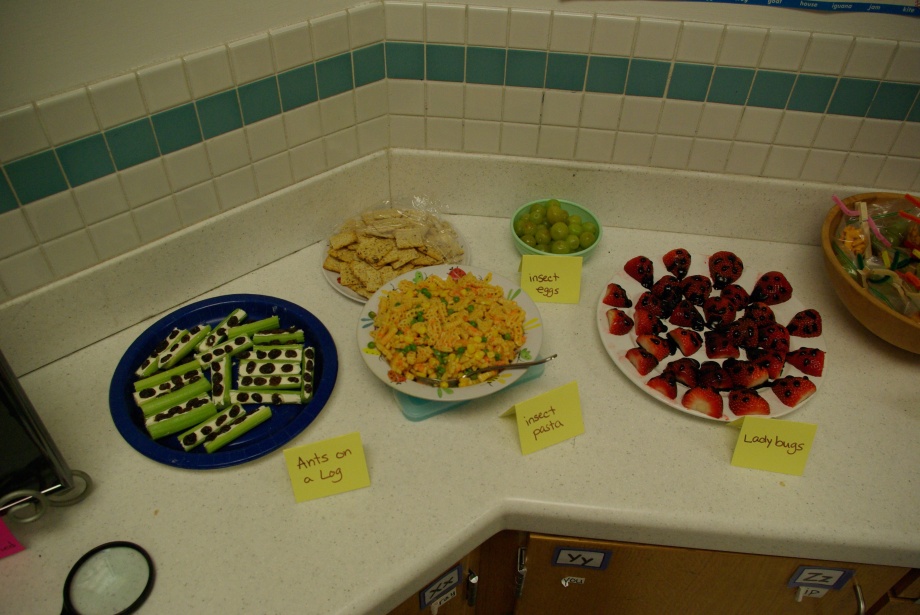 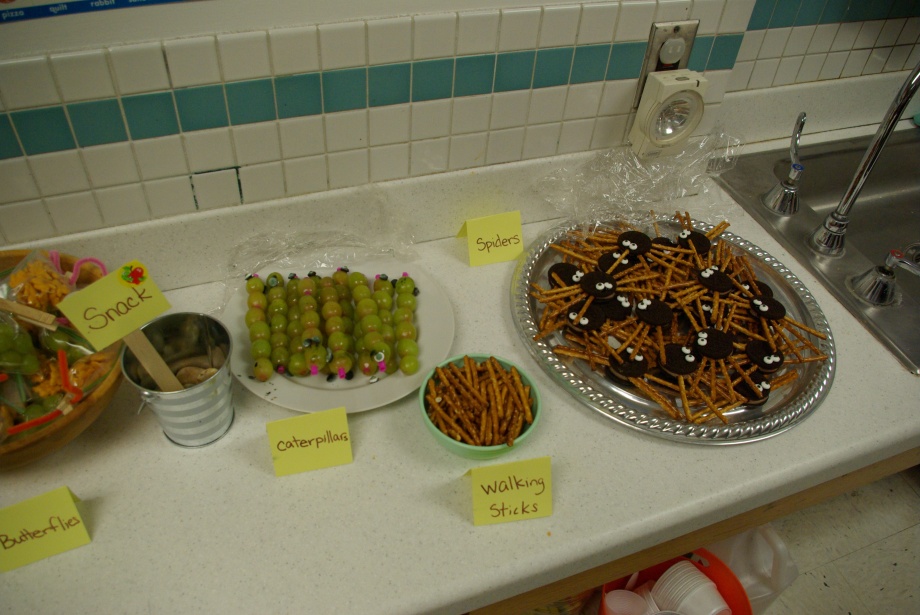 The exhibit even featured a reciption complete with insect inspired treats and snacks.

This class had an awesome time learning about insects! Be sure to check back for our Teacher Feature next week!