This week we are featuring Carolyn Eby, our art enrichment educator. Carolyn has the pleasure of working with all the children in our school on age appropriate and creative art projects. Today I joined Carolyn in the two year old Firefly classroom. This group was learning all about the Arctic so Carolyn decided to do an Andy Goldsworthy’s inspired ice sculpture lesson. Below you will find a reflection and images from Carolyn’s lesson. 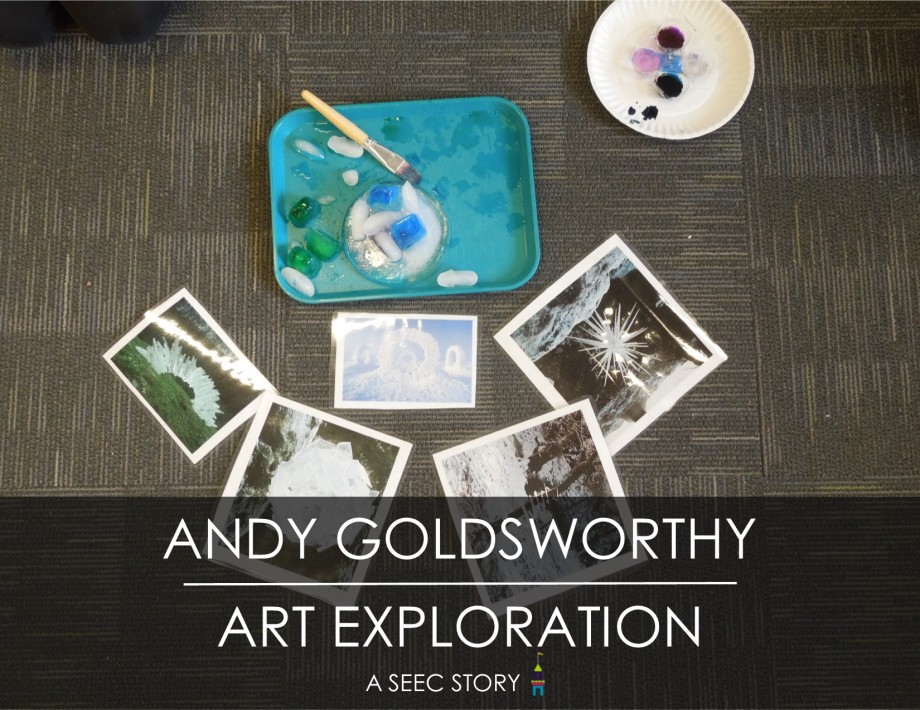 The Fireflies have been studying Arctic habitats, which led me to the idea of working with snow or ice. I really enjoy taking the topics that students are working on in their classrooms and try to further their experience with that topic. For this topic I knew I wanted to work with ice and snow (since we have an abundance of these materials in DC right now), something that people do not usually associate with art making. Thinking of artists who work with ice or snow as a medium I knew I had to do something related to Andy Goldsworthy!

Andy Goldsworthy is an artist that I think inspires both the young and old to go out in nature and play.  Unfortunately, most of his work is impermanent so there was not an ice sculpture I could take the Fireflies to visit. I did however bring to the classroom several laminated copies of his works such as “Ice Arch”, “Stacked Ice”, “Touching North”, and “Icicles” . We took some time looking at each picture closely and noticed different elements of his photos such as shapes, weather, and placement of his sculptures. If I were to continue working with Andy Goldsworthy I would consider going to visit his piece in the National Gallery of Art entitled “Roof”.

There are so many things that I, as a teacher and an artist, admire about Andy Goldsworthy’s work. For one, his work exemplifies patience, which is a virtue I think is really important to making art, and also everyday life. The students who wanted to build really had to take time to balance the cubes and try to stick them together. I also really enjoy that Andy is both a sculptor and photographer, and it was so much fun introducing photography as an art form to the Fireflies. I don’t think any of them had ever seen, let alone touched, a point and shoot camera with a viewfinder!

The students really enjoyed watching how the watercolor paint interacted with their ice. Their interest was strong in watching how the ice would melt and change consistency with the paint. At first the paint froze against the ice, but eventually it became a fun soup to mix!

How did the lesson reach your objectives to expand the topic?

The Fireflies and I have continued working on their exploration of the Arctic habitat since this Goldsworthy lesson. After looking at and working with ice as a material we have moved on to snow. This week we looked at the treks that are left in the snow after humans and animals pass. We worked on making a landscape of snow and animal prints!

What was successful in terms of your preparation and logistics?

It is really tough to find a good container to prepare sheets of ice in, so I ended up using the lids from buckets we use to keep toys in our classrooms. It took me quite some time to prepare the ice cubes and sheets of ice with the freezer space available, but in the end it worked out great! We also have a freezer very close to the classroom so I was lucky enough to keep it freezing until I was done explaining what we were going to do that day. It was fun to bring a material that they have found outside on the playground inside to the classroom where they were more free to explore the ice without all the winter layers. With that said, I think it was also a good move to have a huge pile of towels ready, both on and under the table to ensure no slips or boo boos!

What could you have done differently to better achieve your objectives and expand the topic?

It would have been a blast to take the Fireflies outdoors and have them work just like Andy Goldsworthy does, in the cold. But I knew that it would not be as comfortable, and not as much exploration would be able to take place. It is possible that sometime soon we will try this lesson again on the playground and compare and contrast the two times. Next time it would also be great to have some old film cameras to pass around during circle time to explore.

What was challenging regarding logistics?

I was expecting the ice to do a little bit more sticking with the use of the liquid watercolors (I was hoping it would sort of act as an ice adhesive).  I was hoping that the Fireflies could make more three dimensional work with the cubes, but they had fun regardless and their sheets of ice looked fascinating!

What recommendations would you have for another teacher trying out this lesson?

I think it is better to be over prepared than under prepared for this lesson. I mean this in the sense that I made a huge batch of colored ice cubes, regular ice cubes, and ice sheets. This stuff can be temperamental and you definitely want to have a backup if one of the sheets didn’t freeze entirely or broke en-route to the classroom. I was also very cautious about keeping ice on the table and making sure we had a huge pile of towels as a backup.

Here are a few images from her unit on Andy Goldsworthy: 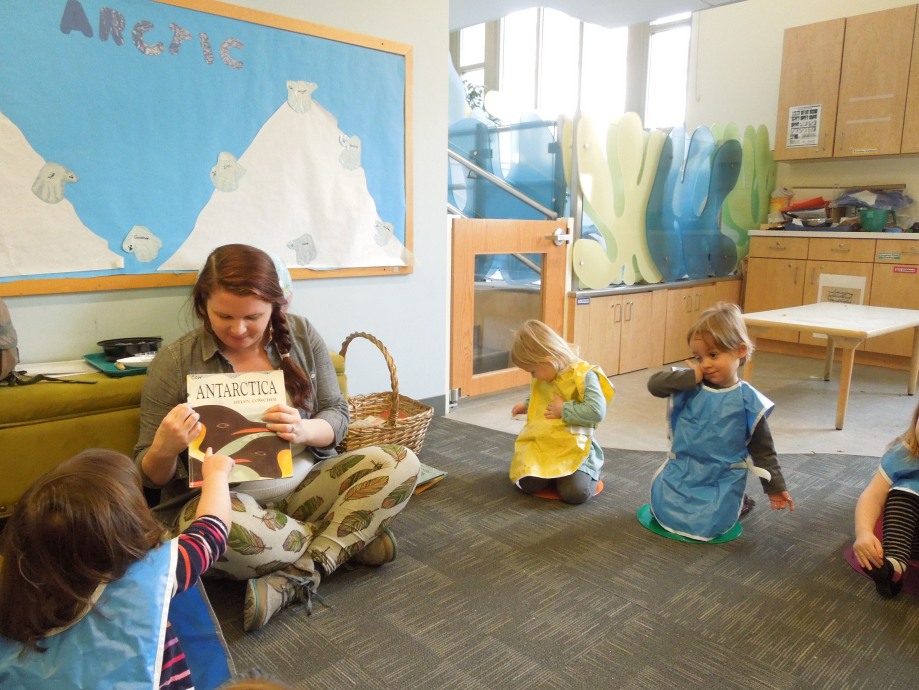 Since the class was already learning about the Arctic, Carolyn began her lesson by selecting a book from their classroom. That way the children could make a quick connection to their topic of study and the exploration Carolyn would be introducing. 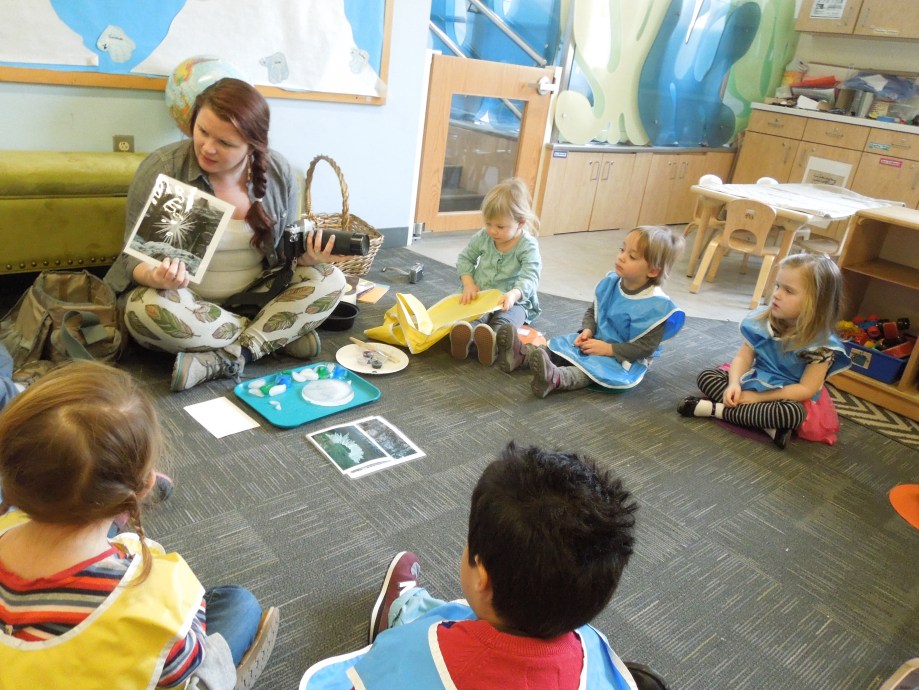 Carolyn introduced the group to Andy Goldsworthy by showing them images of his ice sculptures. She explained that Andy makes things out of things found in nature and the class took a few minutes to think of some things that he might like to create with. Carolyn then went on to explain that unfortunately Andy’s sculptures do not last forever so he takes pictures of his art so that lots of people can see it and record his project. 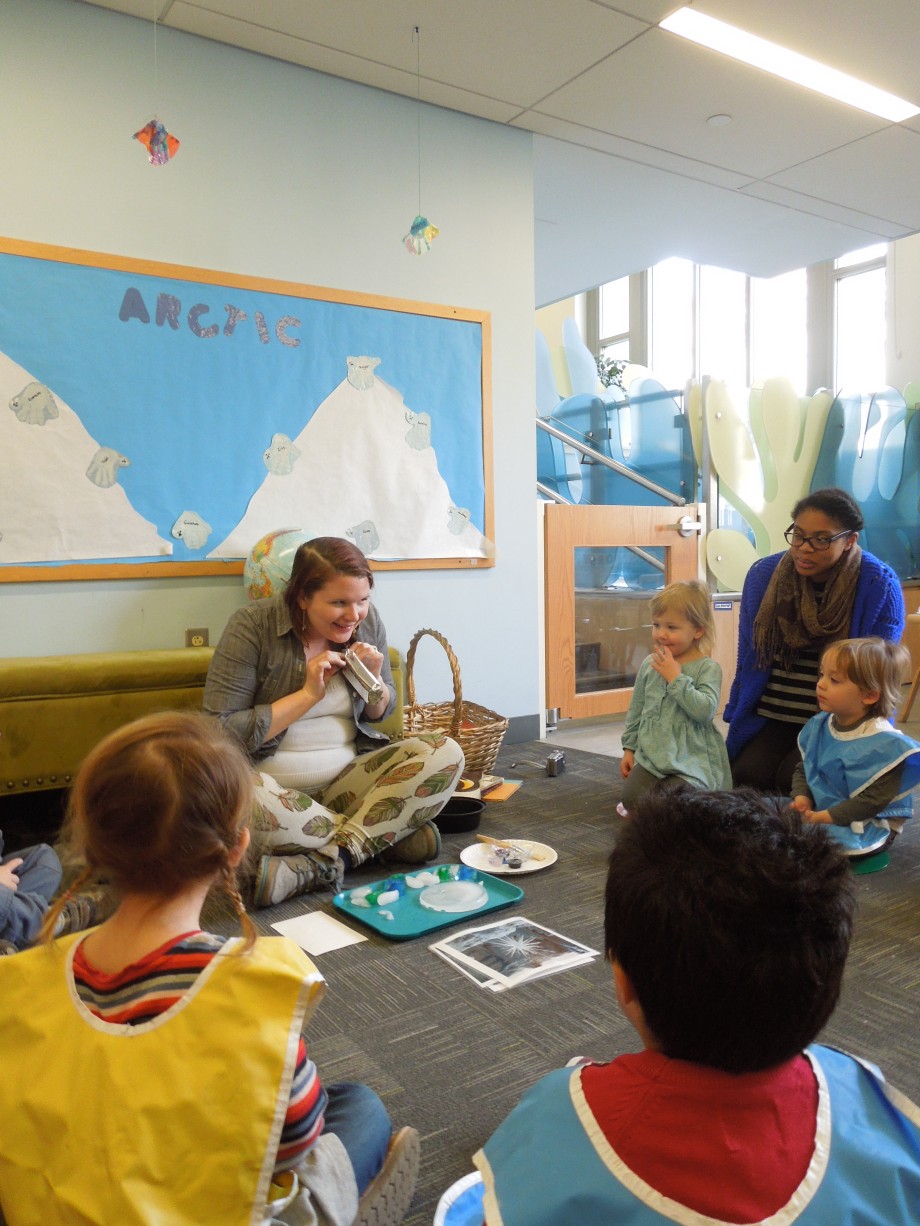 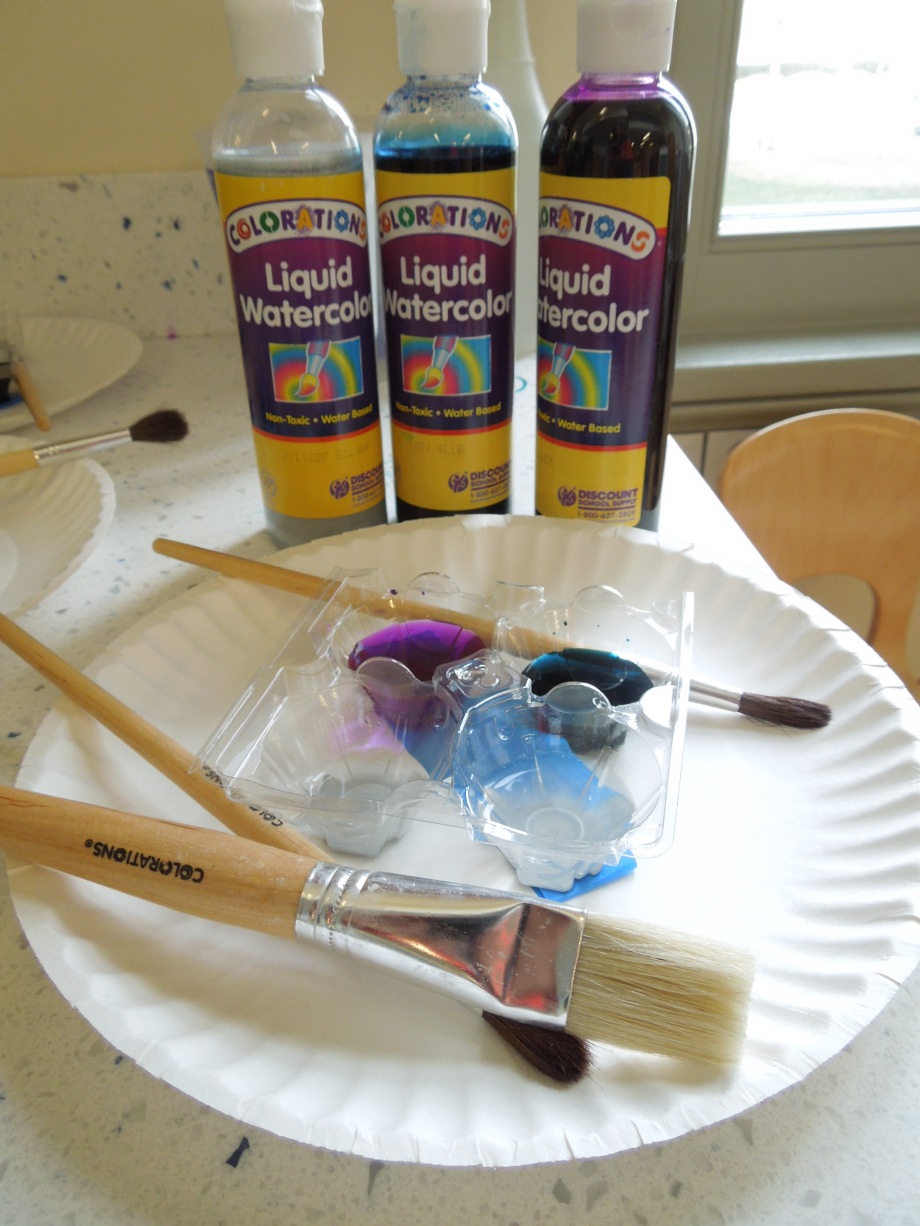 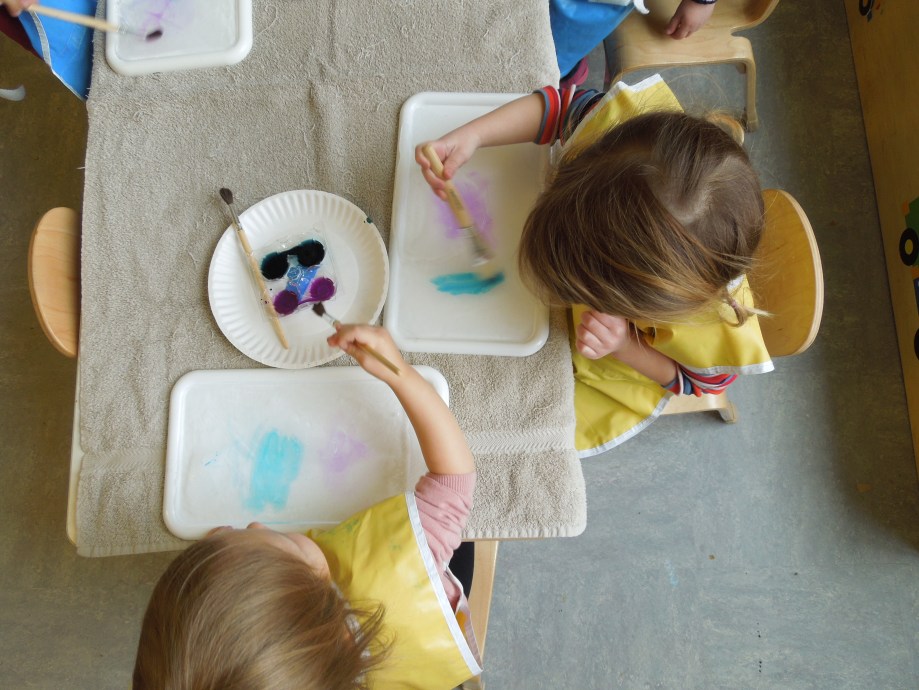 Each child was provided with a tray of ice, paint ice cubes and a paint brush. They were encouraged to paint with the liquid water colors and build with the ice cubes. 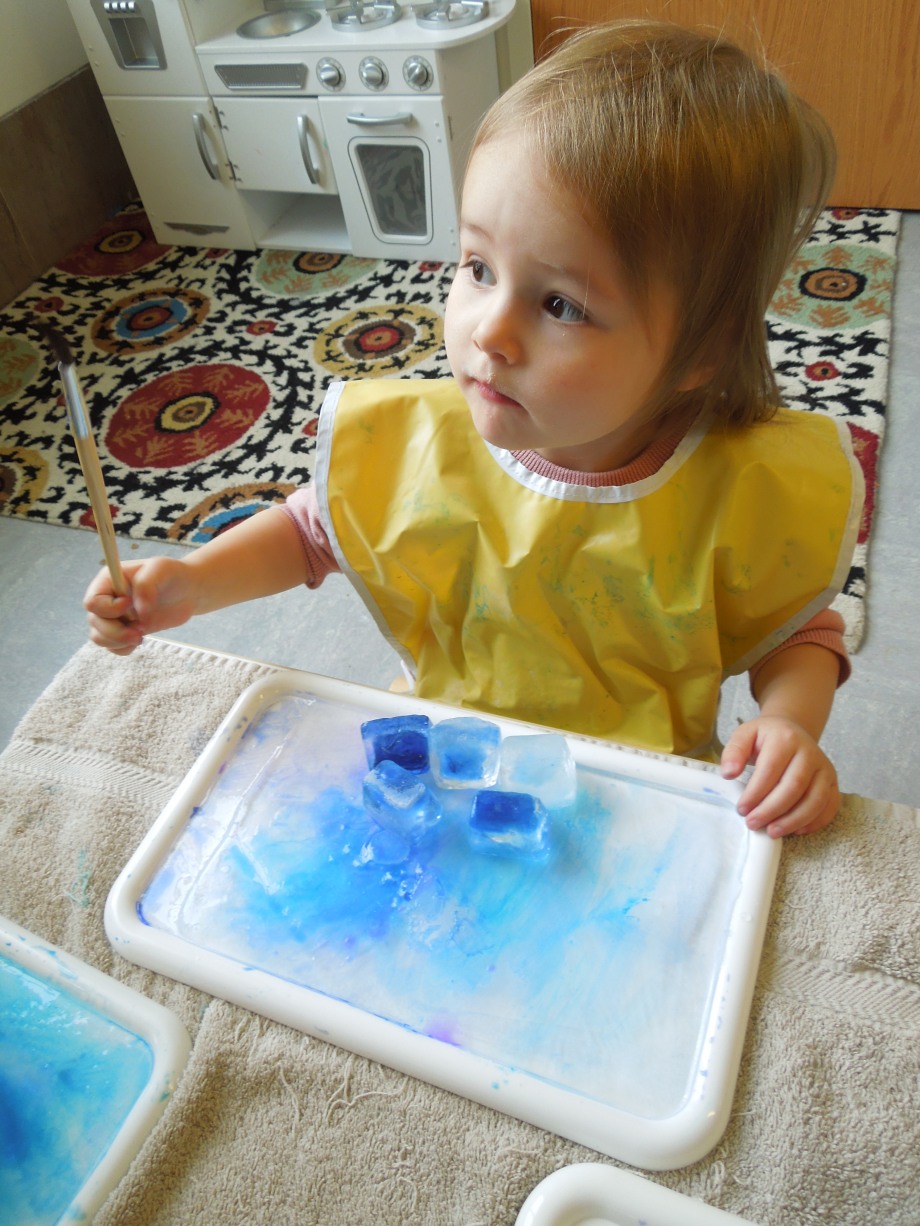 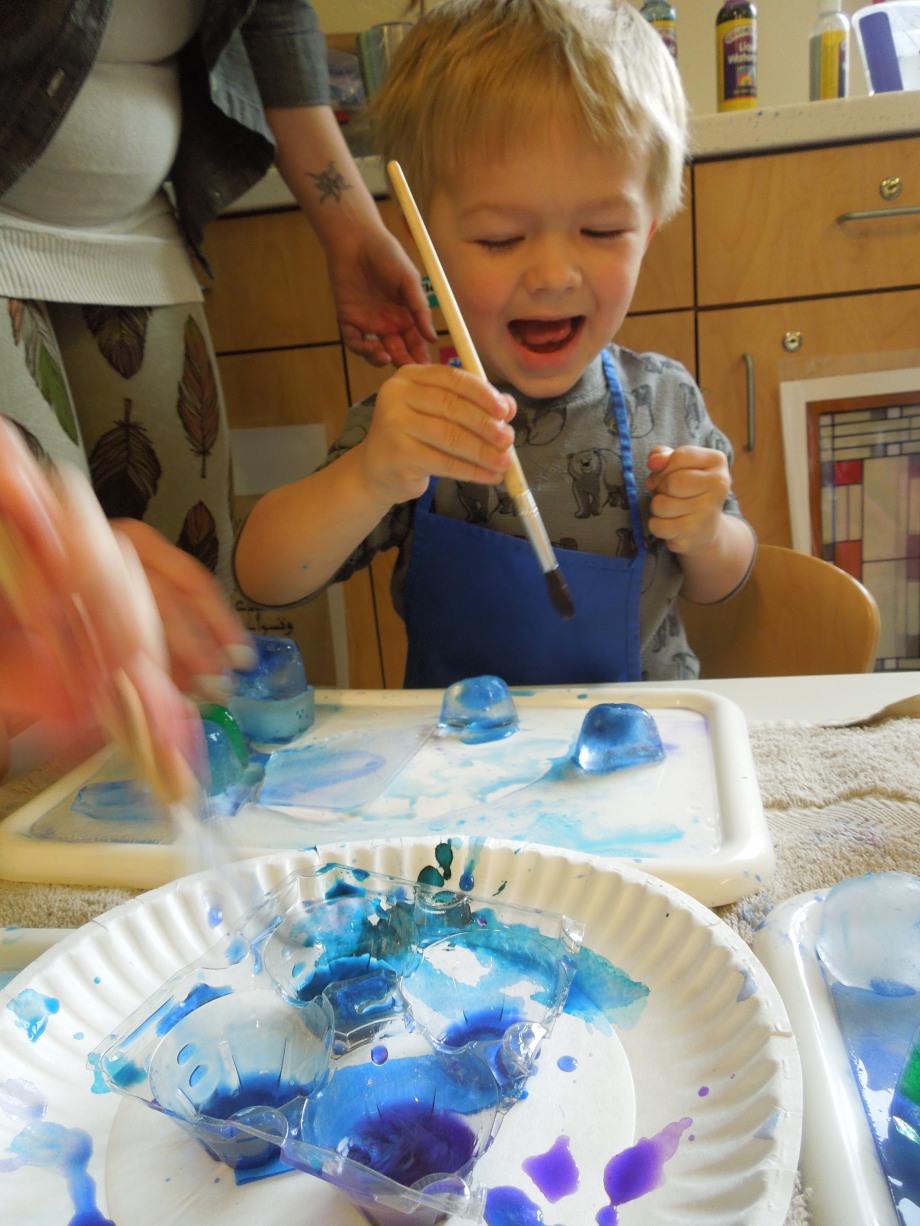 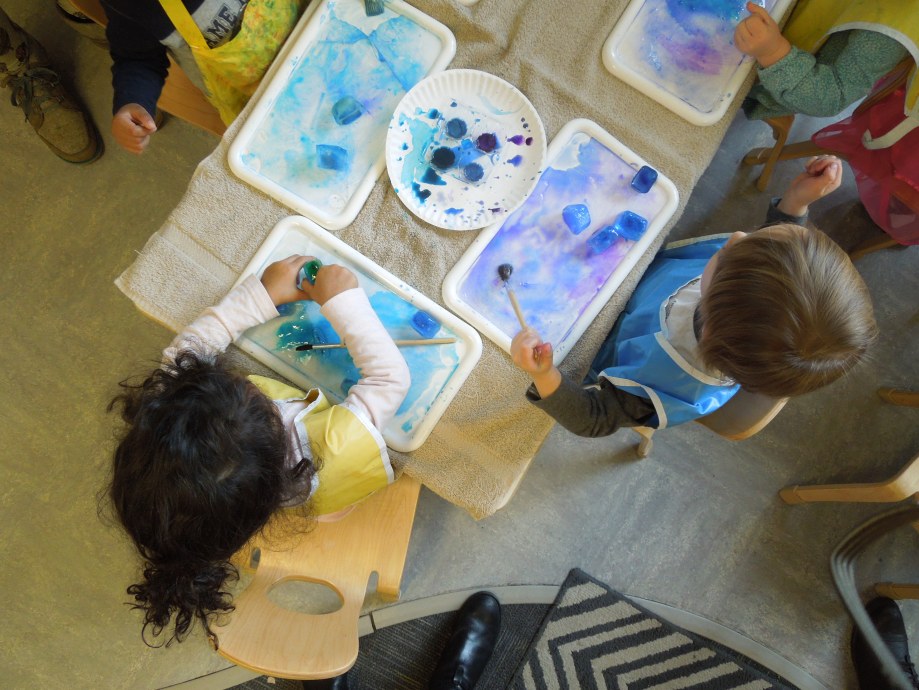 As you can see, this project was a huge hit! The children spent nearly 30 min on their project. 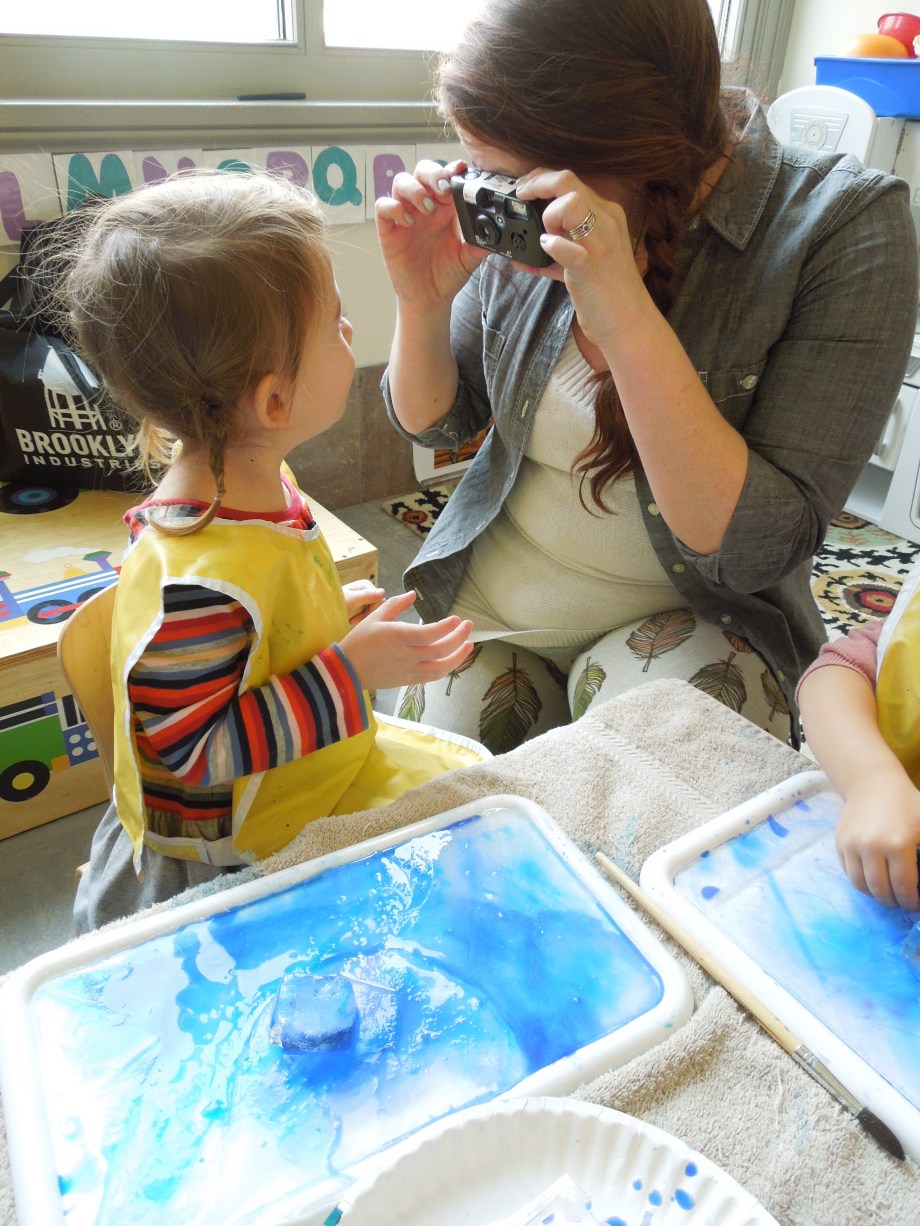 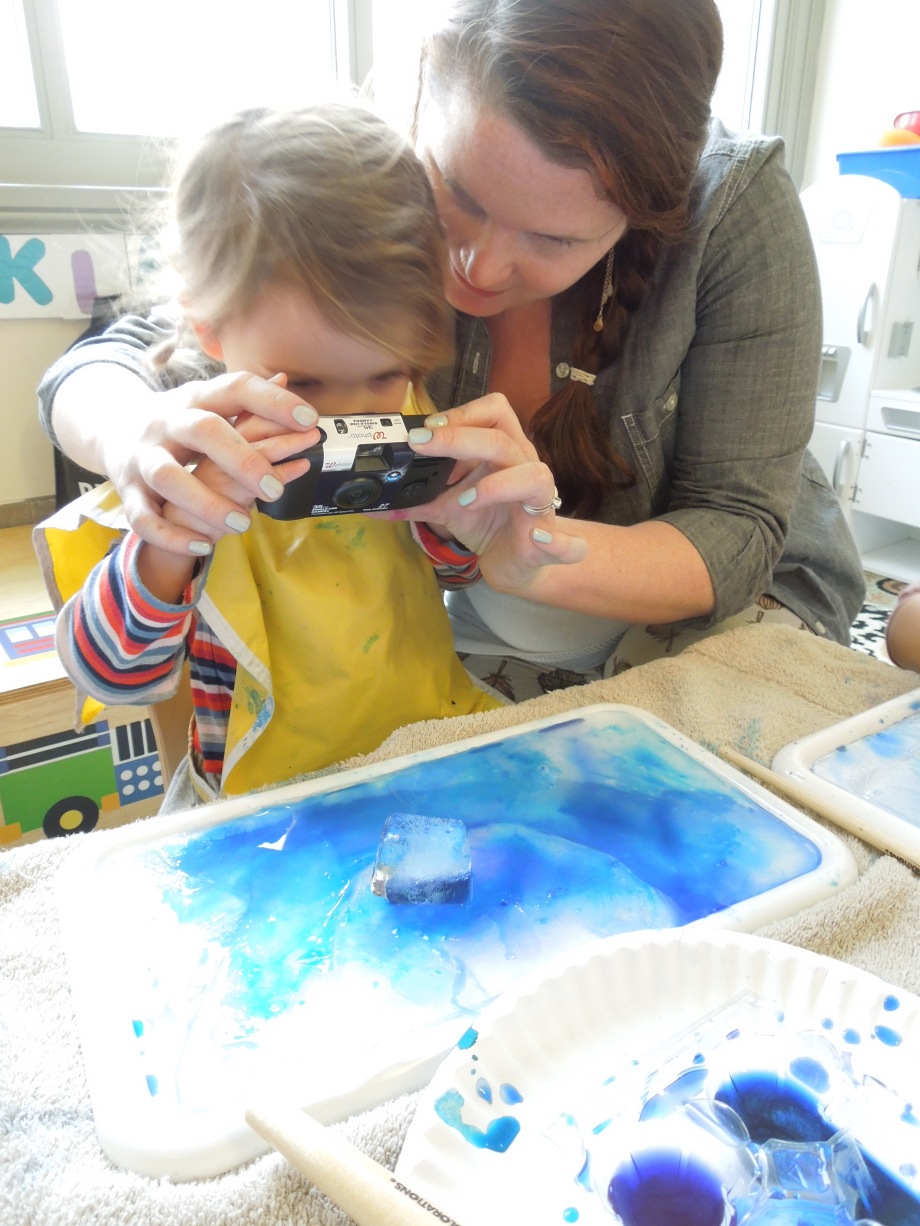 Once a child indicated they were finished, Carolyn gave them a quick camera tutorial and the child took a photo of their sculpture. I can’t wait to see their images!