This week we are featuring Smithsonian Early Explorers (SEE) program.  This SEEC program for children 18 months to 3-years-old and their adult caregiver. It meets for two hours twice a week in classrooms on the National Mall and takes trips to various Smithsonian Museums. A few spaces are still available for the 2019 – 2020 academic year. Ready to enroll – use our easy online application. 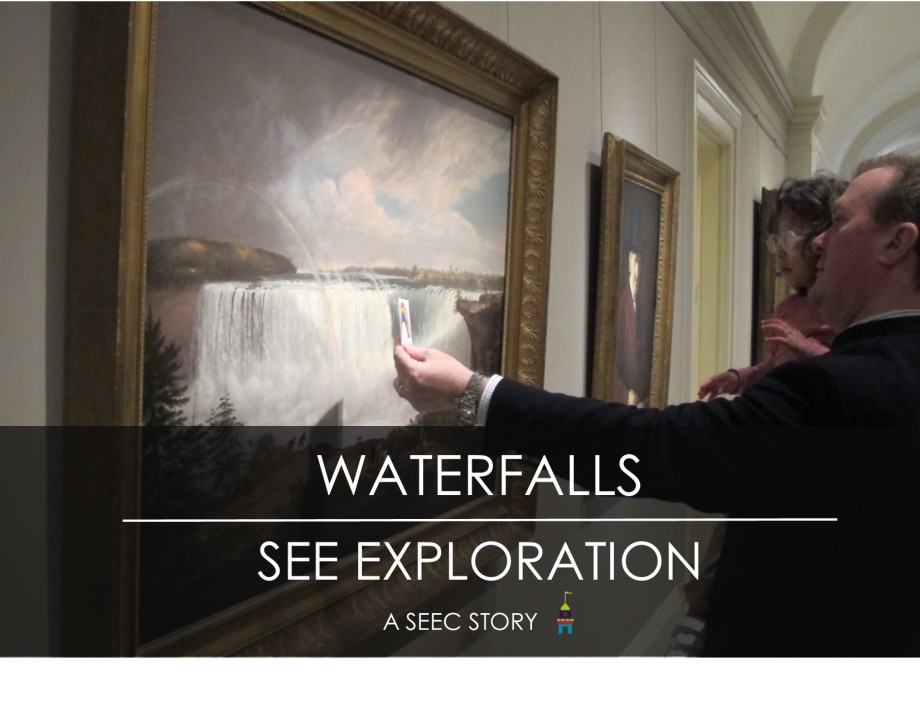 This lesson on waterfalls was part of a larger unit on the story “Going on a Bear Trek.” Bears are an animal many young children are familiar with and gravitate toward, and these toddlers were no exception. During this unit, we learned about different bear characteristics including their fur, claws and teeth, and became familiar with many different environments bears call home. We had been studying rivers for a few weeks and learned that grizzly bears hunt for salmon in the river. This lesson focused on waterfalls and the different kinds of things we might see happening at a waterfall.

The Smithsonian American Art Museum is great for kids because the quiet galleries provide an ideal space to look carefully at the artwork. When bringing young children to an art museum, it is often helpful to visit spaces that are not too crowded or loud. I chose the painting The Great Horseshoe Fall, Niagara by Alvan Fisher because its large size and subtle details provide a great opportunity for kiddos to look carefully.

The goal of this lesson was for the children to understand that a waterfall is part of a river, a geographical feature we had been learning about for a few weeks. We spent a lot of time using our bodies to demonstrate that rivers flow from high places to low places, and we repeated that concept in this lesson. We also reinforced the concept that bears go to places like rivers and waterfalls to look for fish to eat. In this lesson, I introduced the concept of rainbows and light refraction – a concept that is very abstract, so we tried to make it as visual and concrete as possible. The goal was for the children to understand that rainbows are created when light and water meet.

I find that many young children engage better with material when the concepts are introduced in the form of a story, or when music is used as a teaching tool. This lesson featured a lot of singing, dancing, and moving our bodies around and it seemed to resonate with the kiddos. Having something for each child to touch is really helpful as well. On this visit, the children were each given a small photo of a rainbow that they could use to connect to the painting, the songs we were singing, and the book we were reading (A Rainbow of my Own by Don Freeman). A nice benefit of holding our lesson at the American Art Museum was the beautiful Kogod Courtyard, where the kids were able to freely move their bodies and play in the fountains after our lesson. It was a great way to wrap up as the children could make connections to the flowing water under their feet as they played.

What could you have done differently to better achieve your objectives and expand the topic?  What was challenging regarding logistics?  What recommendations would you have for another teacher trying out this lesson?

The biggest challenge of this lesson was introducing the concept of light refraction. We tested out this phenomenon in the classroom using a glass of water, but it would probably have been more effective if we were able to try it in a dark room with a brighter flashlight. Since the rainbow wasn’t quite as visible during our experiment, the cause-and-effect relationship of light passing through water may have been lost.

Here are a few images from their lesson on waterfalls:

Allison started the day by letting the children explore learning centers that focused on rivers, a common place to find a bear! 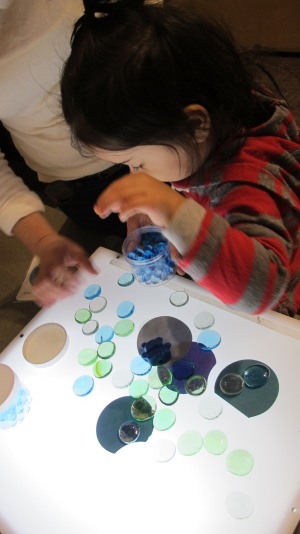 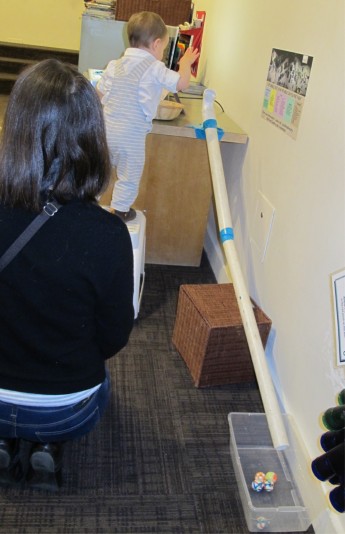 Children had lots of choices to explore.  A light table lit up different water colored objects including glass marbles and water beads.  Children rolled bouncy balls down a PVC pipe to illustrate how water runs down a mountain. 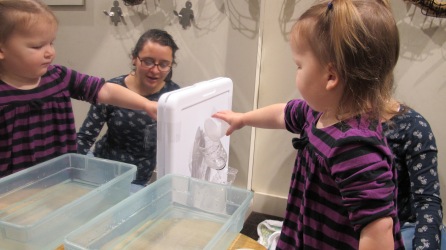 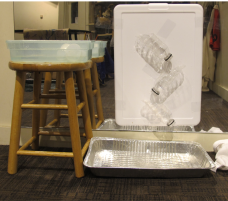 They also experimented with this concept by pouring water down empty water bottles, and watching as the water zoomed back and forth as it slid down into a pan.

After learning centers, Allison called the group together for their morning meeting.  First, she reinforced the concept that rivers flow down a mountain from high to low by demonstrating with her body. The students and their caregivers jumped in and also moved their bodies from high to low, like a river traveling down a mountain.

Then it was on to the focus of the day – waterfalls and rainbows.  Allison explained that waterfalls are a part of rivers, and that sometimes you can see rainbows at waterfalls. Allison told the group about refraction, the interaction between water and light.  She illustrated this by demonstrating what happens when light penetrates water- sometimes there’s a rainbow! 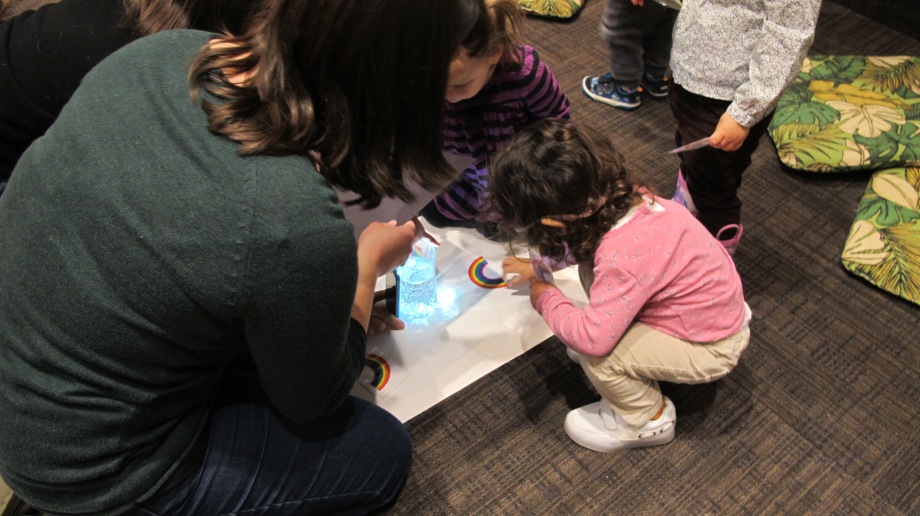 Each explorer received a picture of a rainbow to hold as they got a closer look at the light moving through the water.  They compared their picture to what they saw, and noticed similarities like its brightness, and differences, for example, they only spotted one color – blue.  After singing their Bear Trek song, and making whooshing waterfall sounds, it was time to trek to the Smithsonian American Art Museum.

Once in the museum, the class searched for waterfalls and rainbows, and found both in the painting The Great Horseshoe Fall, Niagra by Alvan Fisher.  The group observed the painting and compared the rainbow in the painting to the one they were holding.  They noticed that all the colors were present and sang a rainbow song. 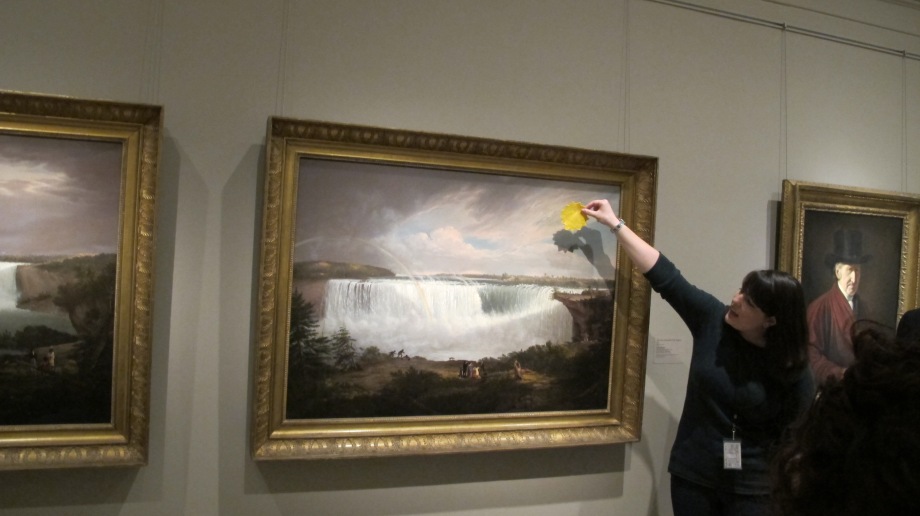 Allison used a felt sun to reinforce the concept that rainbows appear because of refraction; the sun is shining on the waterfall, which causes the rainbow. 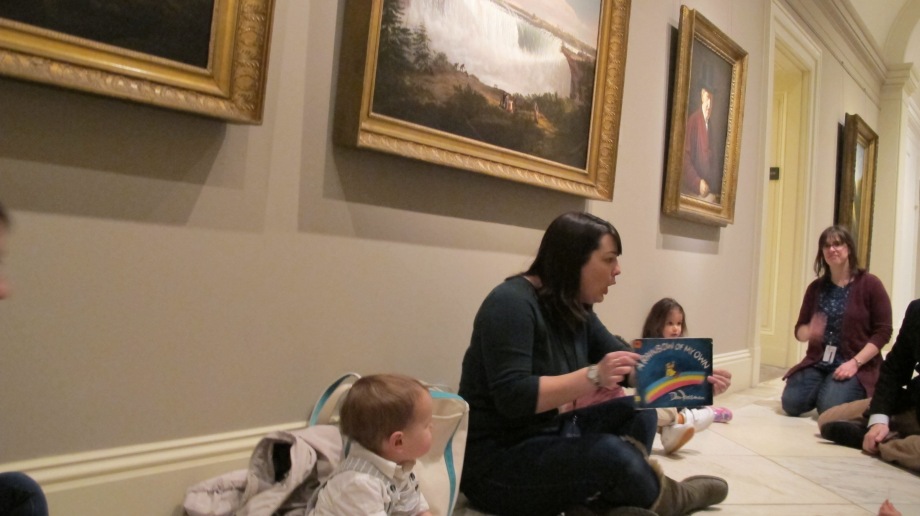 Next the class read A Rainbow of My Own by Don Freeman, which tells the story of a boy who imagines what it would be like to play with his own rainbow.  As they read the story they spotted all the colors of the rainbow.

Allison then reminded the class that bears catch fish in rivers and waterfalls, showing them a picture of a bear catching salmon in a waterfall.

Then it was time to make their own waterfall by sticking blue crepe streamers to a long, narrow piece of poster board.

When they were finished Allison held up the waterfall and shook it, making the crepe paper wiggle.  The class made the whooshing sound of a waterfall. 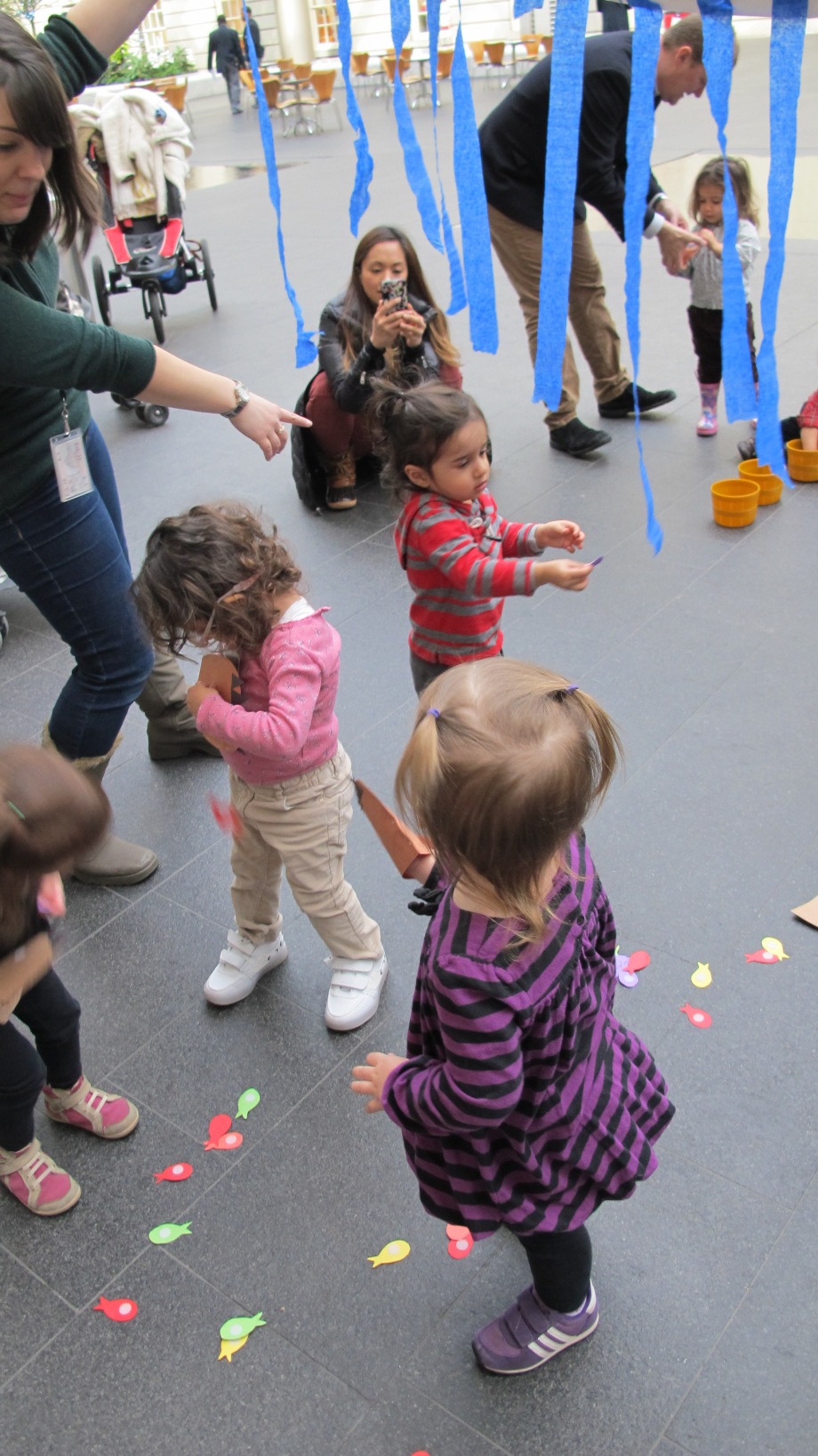 Then the group moved down to the Kogod Courtyard to play in their waterfall.  They got into bear mode and jumped through the waterfall to go fishing. 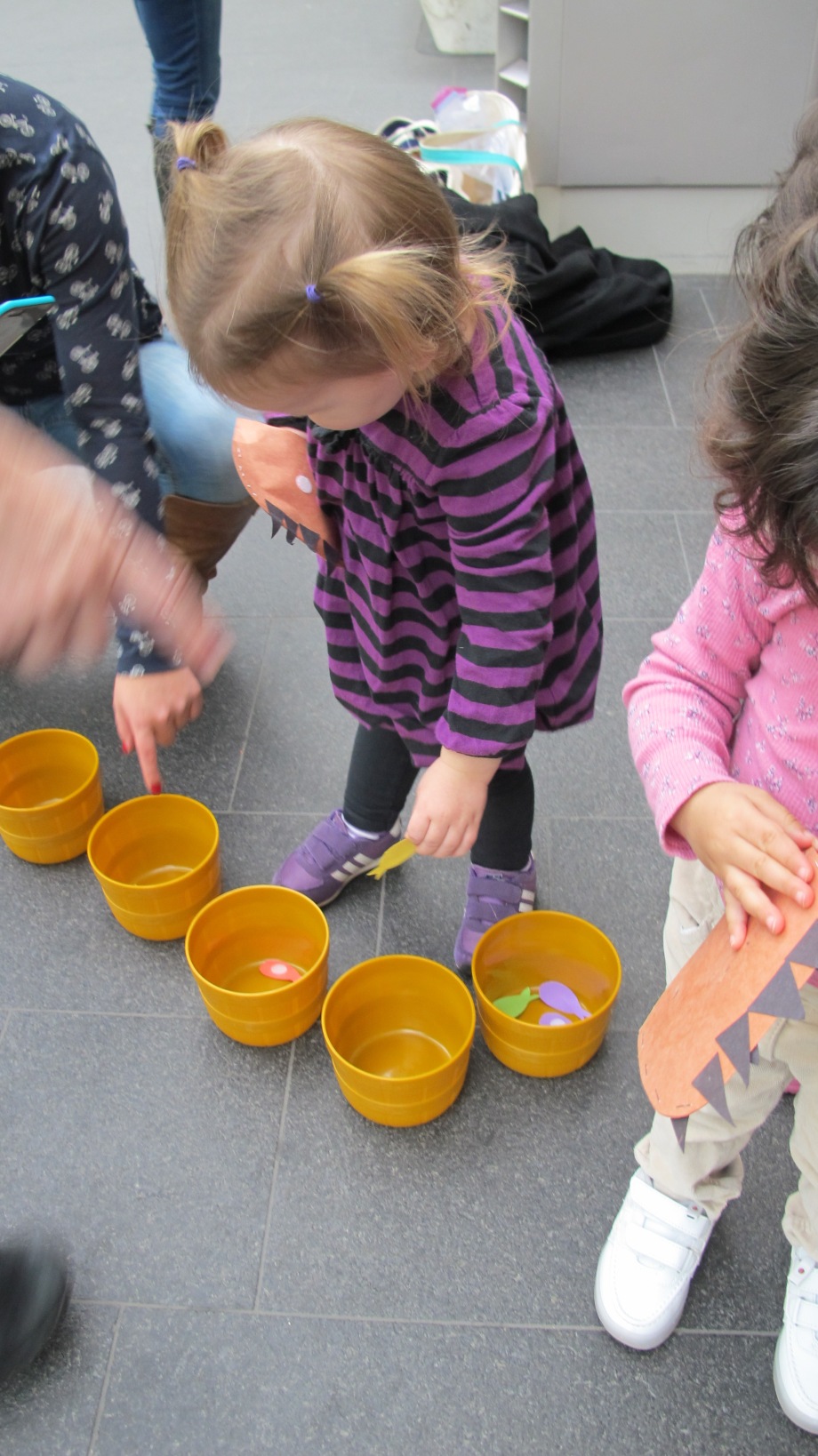 The kids put on a paper bear paw and used the velcro to capture fish. Then they brought the fish back through the waterfall to the appropriate color bucket.

Lastly, the group loved playing in the water feature in the courtyard of museum.  They experimented walking over the flowing water, and feeling it run over their fingers.

A few spaces in the Smithsonian Early Explorers (SEE) program are still available for the 2019 – 2020 academic year. Ready to enroll – use our easy online application.