This week we are featuring Silvana Oderisi and Cathyryn Prudencio in the Kindergarten classroom.  Our teachers noticed that their students had been very interested in weather, especially extreme weather. I joined them during their week on extreme heat for a lesson on haboobs (sandstorms).  Below you will find a reflection from Silvana and Cathryn, and images from the lesson. 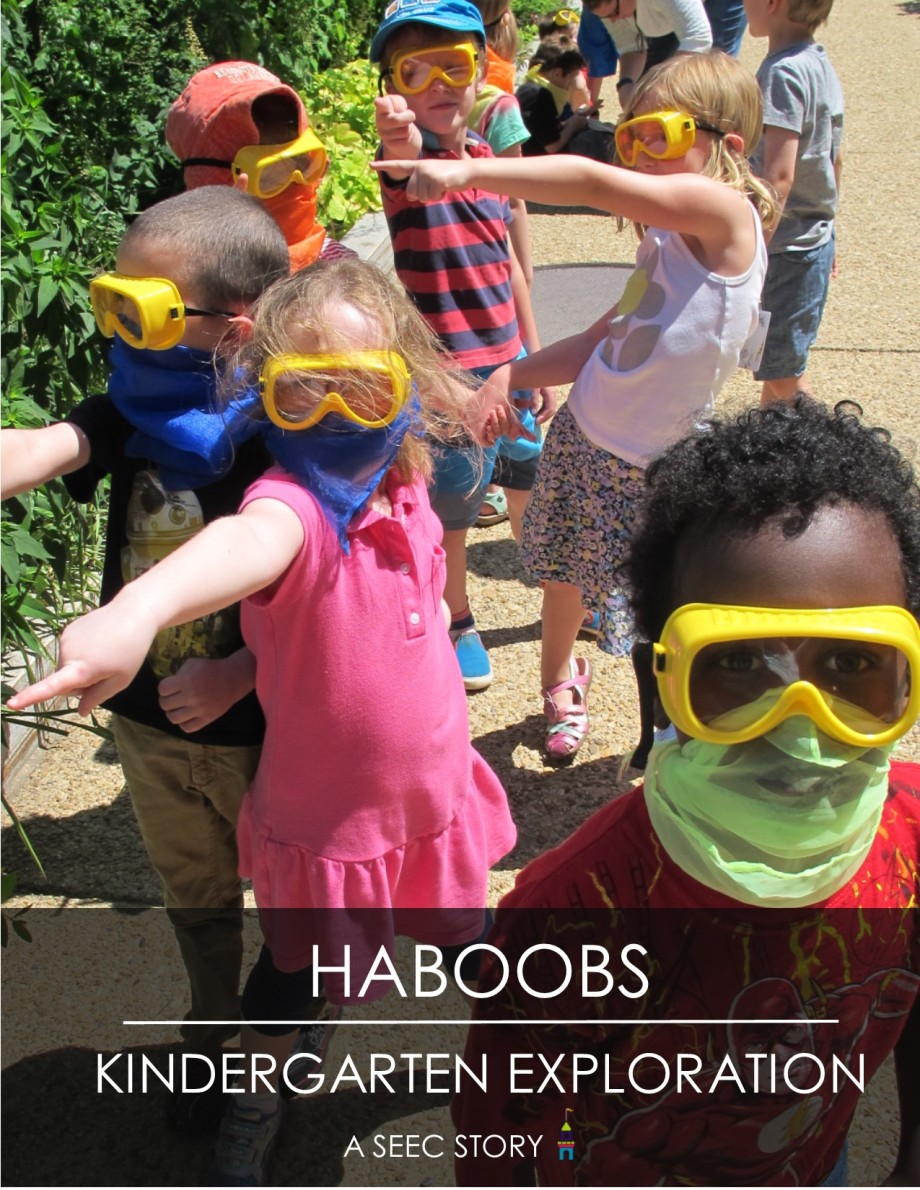 Our latest topic has been a unit on extreme weather. We have studied thunderstorms, tornadoes, hurricanes, tsunamis, monsoons, blizzards, and haboobs. We chose this topic based off of the interests of the kids, who had been discussing different types of weather and asking a plethora of questions about weather. One of our students even made his own weather book and brought it in to show the class during a sharing time. His curiosity blossomed into a class-wide interest of weather phenomena and extreme weather.

The learning objectives for this lesson were to understand what causes a haboob, use our five senses to describe a haboob, and understand how people can prepare and respond to a haboob. The information we wanted the children to take away was that a haboob is caused by an incoming thunderstorm whose winds cause the sand and dust to be blown up and create a domelike sandstorm known as a haboob. We also wanted them to know what people do to protect themselves during a haboob, such as wearing scarves and goggles, or staying inside.

What was most successful about your lesson? How did the lesson reach your objectives to expand the topic?  What was successful in terms of your preparation and logistics?

I think the most successful part of this lesson was engaging all five senses in order to create the experience of a haboob for the children. We discussed what it sounds like, looks like, feels like, smells like, and thought about what it might taste like. This manner of approaching the subject made it much more approachable and meaningful for the children. Through using the five senses it also helped us understand why you would want to protect yourself in the first place. Preparation and logistics were also perfect that day because it was so windy! In addition, on our way to the Hirshhorn we passed by the construction taking place on the National Mall, which kicked up a bunch of dirt and dust creating a haboob of sorts (we really loved using our imagination here).

What could you have done differently to better achieve your objectives and expand the topic?  What was challenging regarding logistics?  What recommendations would you have for another teacher trying out this lesson?

We wanted to find an object in the museums that we could use in an interactive way, but also matched the learning outcomes.   We found a great painting,  Jake Leg by Robert Irwin at the Hirshhorn Museum and Sculpture Garden, that reminded us of what it might look like if we were in a haboob, but it required us to put a lot of thought into how we could bring it to life for the students!  We thought about ways we could encourage the children to use their imagination, how they could use their five senses to describe what they were interacting with, as well as make a connection to a piece of artwork. This was great because it helps the kids connect with artwork in an imaginative way that makes art more approachable. A recommendation we would make for another teacher trying out this lesson is to make sure you think through your students’ interests and learning styles because I think that in the end that is what made this lesson so successful because they were so invested and loved the idea of using their senses to experience what a haboob is like.

Here are a few images from their lesson on Haboobs: 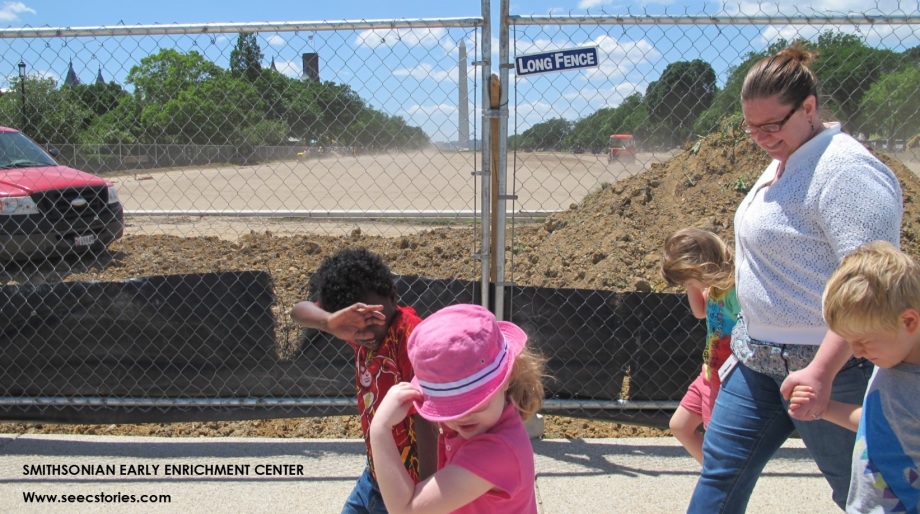 On their walk to the Hirshhorn, the kindergartners felt like they were in a haboob! On this particular day the wind was very strong and it was blowing dirt from the construction area on the National Mall into our faces.  It was not very pleasant, but very appropriate for the day’s lesson.

The class made it to the Hirshhorn and went to the Robert Irwin’s “All the Rules Will Change” exhibit.

Next Silvana showed a diagram of a haboob, and pointed out that she had written haboob in arabic, which means, “strong wind”.  She explained what a haboob is and how they form using the diagram and a video of a haboob.

The class used their senses to imagine what it would be like to be in a haboob.  First they explored haboobs with their sense of sight by putting on goggles that were covered in sand (Silvana prepared these by cutting contact paper to fit inside the goggles, and pressed sand onto the contact paper).  The children took turns putting on the goggles and said that they could see shadows, but nothing else.  Looking through the goggles reminded the children of the painting, as they could only see one color. Some of the students said that they might be scared if they could not see anything during a haboob, but Silvana emphasized that while it may feel scary, people have developed ways of protecting themselves during a haboob to stay safe, and they would talk about that more later in the lesson. 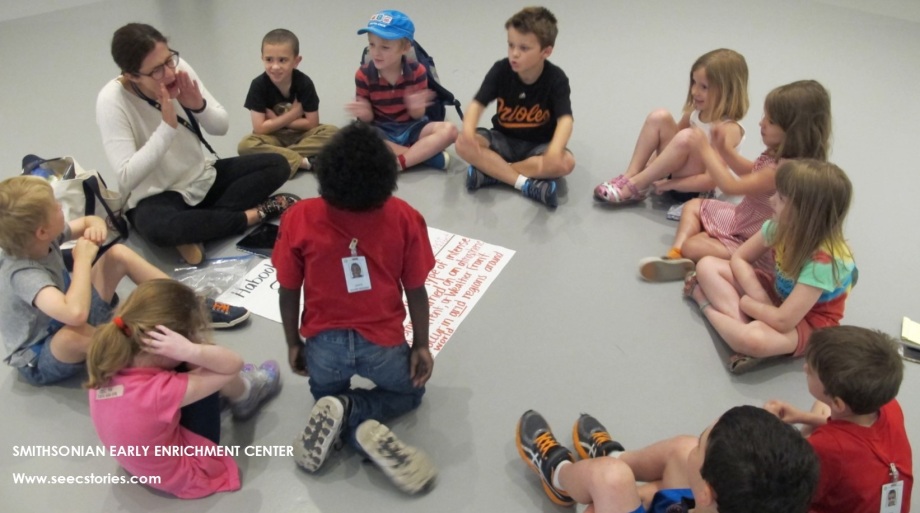 Next they focused on what it would sound like to be in a haboob.  They brainstormed sounds they might hear such as crashing noises, gushing winds, sand blowing, footsteps, and people saying, “I want to get inside!”  Then they used their voices and bodies to make these sounds together to make a soundscape of a haboob.

They explored haboobs through their sense of touch by feeling sand, and imagining how it would feel if it was blowing on their body.

Silvana told the class that haboobs typically happen in the southwest from mid June to the end of September, but they cannot be predicted like a rainstorm.  She said that in order for people to stay safe and protected in case of a haboob, people might carry a scarf and goggles with them.  She put on a scarf and showed the children how this protected her ears, nose and mouth, while the goggles protected her eyes, keeping her body safe. 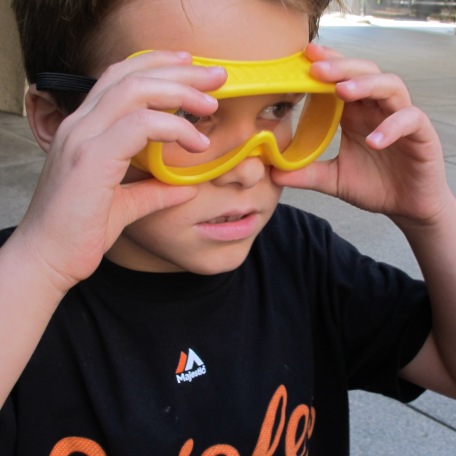 Back outside the kids had a turn to put on goggles and scarves for their walk back to school. 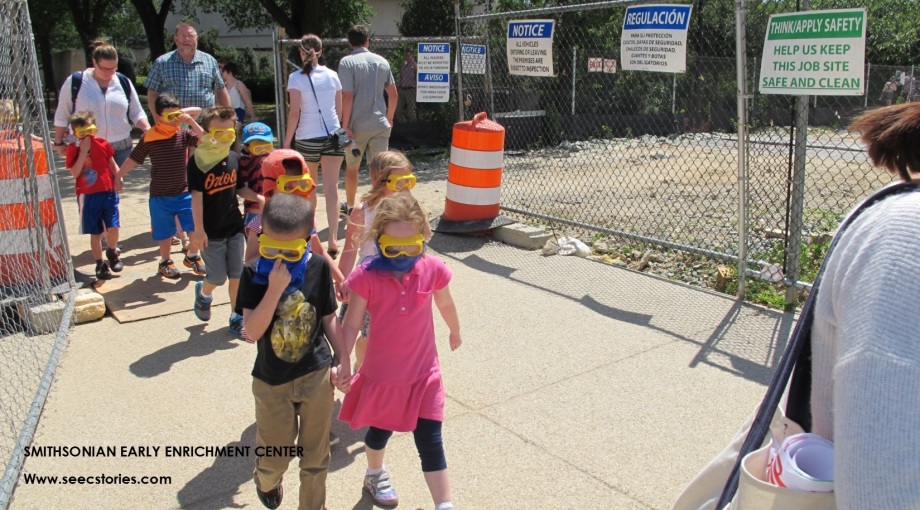 As they crossed the construction site their faces were protected from the dust and dirt by their gear, much like it would be in a haboob.

While the conditions of a haboob are much more intense, the strong wind and blowing dirt helped the children imagine what it would be like to be in a haboob.

After learning about Haboobs, the kindergartners continued learning about weather and meteorology.  Come back next week for more ideas from their unit on Weather! See you in two weeks with our next Teacher Feature!