This week we are featuring Maureen Leary who teaches Spanish to our kindergartners.  Maureen visits with the kindergarten class twice a week – one day to work specifically on Spanish vocabulary, and another day to focus on Latin American culture.  During her days focused on Latin American culture, Maureen teaches an introductory lesson in the morning, followed by a connected museum visit in the afternoon.  I joined the class for a lesson on Luis Soriano, a man who takes his donkeys, Alfa and Beto, around to small towns in Colombia to provide a mobile library for children. Below you will find a reflection from Maureen, and images from the lesson.

A reflection from Maureen:

As part of the Kindergarten Spanish curriculum, we spend time learning about each country where Spanish is the official language. These lessons encompass all sorts of topics, including art, music, history, geography and cuisine. For this lesson our topic of exploration was Luis Soriano, a man who travels with his donkeys Alfa and Beto to deliver books and provide instruction to children in remote areas of the mountains in Colombia. His traveling library is called the Bilblioburro (donkey library). This topic appealed to me because it emphasizes many important concepts – service to others, recognition of the different circumstances people live in, cherishing access to books and learning, and communities coming together for social improvement.

In the classroom we read a picture book about Mr. Soriano and watched a video describing his work. Each student then got a chance to share a favorite book brought from home and describe why it was special. We discussed how lucky we are to have access to so many books, but that not everyone in the world has that access. Mr. Soriano has dedicated his life to providing educational resources and instruction to children in numerous remote mountain villages. In the video we watched, he emphasized how important education is to the betterment of the lives of the children he serves, who otherwise might not find many opportunities for success.

For our museum visit we went to the Smithsonian library located in the Natural History Museum. The students regularly visit the DC Public Library, and they are certainly familiar with the basic concept of what a library is. For this lesson I thought it would be fun to explore how libraries can be very different in terms of size, types of resources, and patrons, but what they all have in common is their purpose to share information and help people learn. Our class was fortunate that we had a SEEC parent who works for the Smithsonian Libraries available to describe the library to us, show us examples of the types of books found there, and give us a tour. We learned that the library at Natural History mostly houses science textbooks and research documents, and that there are numerous librarians there who specialize in different branches of science. A highlight of our visit was checking out the stacks and getting a chance to try out the movable shelves!

After visiting the library we went to a quiet spot in the museum and read another picture book about Luis Soriano, called Waiting for the Biblioburro. In this story a girl eagerly anticipates the next visit from the Biblioburro and is inspired to write her own book while she waits. We then discussed that we were going to embark on a project as a class and make our own book to send as a gift to Luis Soriano. After talking about this idea for a few minutes, I told the students that I had been in touch with Mr. Soriano and he was happy to answer questions from them. We made a list of the things the students were curious about, like how many books the children could borrow, how he protects his books from bad weather, and how Mr. Soriano learned to read.

This lesson has had quite a bit of follow up. First, I sent the questions to Mr. Soriano and he promptly replied with detailed answers. The students and I really enjoyed reading his responses. We then began our book project. We decided to do a bilingual ABC book with ocean animals, since the Kindergarten has been doing an in-depth ocean unit. We also liked the idea of doing an alphabet book as homage to the hard-working donkeys, Alfa and Beto, who are named for the alphabet. We went through a careful process of selecting an ocean animal for each letter of the Spanish alphabet and assigning two animals to each student to make illustrations for the book. The students worked on their illustrations for several weeks with our art specialist, Carolyn, and they are continuing to work on the text with me, researching and choosing interesting facts about each animal.

The timing of this lesson worked out really well, as March 20 was the 20th anniversary of the founding of the Biblioburro program, and to mark this occasion Mr. Soriano is fundraising to build a new library for his town, La Gloria. As a final part of this lesson, we will decide on some type of fundraising project of our own so that we can make a donation as a class to Mr. Soriano’s library project.  We will send him our monetary donation along with the book that he inspired us to write. It is my hope that this lesson will stick with the children for a long time to come, and that they will not only remember Mr. Soriano’s fascinating story, but they will better understand the benefits of serving the community as well as the importance of education.

Here are a few images from their lesson on Biblioburro – The Donkey Library: During their morning lesson, Maureen met with the kindergartners in small groups to introduce them to the day’s topic.  She began by sharing a map of the world with the children.  They were quick to point out the countries they had already learned about.  Maureen explained that today they would be moving to a country in South America – Colombia!

In preparation for this lesson, Maureen asked each child to bring a special book from home.  After looking at the map, one child exclaimed, “If we’re talking about Colombia, why did we bring in our books?”  Maureen said that was a great question, and she had a video to show them that would make clear the connection between Colombia and books. 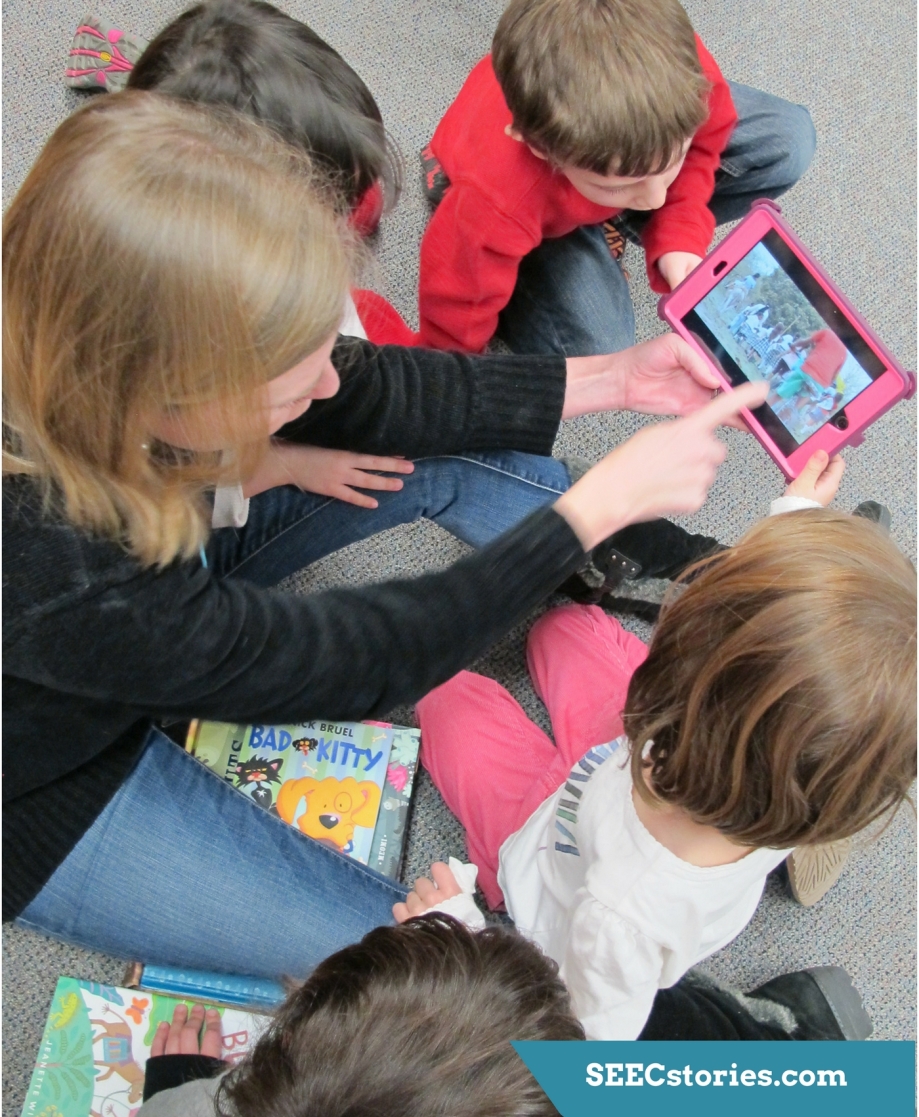 Maureen introduced the children to a man from Colombia named Luis Soriano via a video she played on an iPad. As the children watched the video, they were impressed by the number of books that the donkeys carried.  Maureen asked questions to get the children to think about what it would be like if they lived in a place where they did not have easy access to books.  The children were very engaged in the video, and had comments and questions of their own including, “I can tell he loves books!”, “Is this happening right now?”, “Does he still have that donkey?”, and “I think it makes sense that we brought in our books!”

After watching the video, Maureen turned to the children’s special books from home.  She asked why they thought books were important.  All the children had something to say about this including, “because if you don’t have school, you need to learn from something”, and “you can learn words from books.”  Then the children took turns sharing their books, and why they were important to them, whether they were gifts, they loved how funny they were, or provided knowledge.

To end their morning lesson, Maureen read the children Biblioburro: A True Story from Colombia by Jeanette Winter.  This story provided more information about Mr. Soriano and allowed Maureen to answer the questions they still had. That afternoon, the class went to one of the Smithsonian Libraries located in the the National Museum of Natural History to visit another type of library they might not be familiar with, and broaden their idea of what a library is and looks like.  They met with Sara Cardello, an Education Specialist at the Smithsonian Libraries.  Before they entered, she asked about the rules of a library, and many of the children responded with “we have to have quiet voices”.  Sara agreed, and said that they needed to have quiet voices so people inside the library who were reading could concentrate.

The class sat down and discussed with Sara what you can do in a library including reading, and finding out information if you have a question. The children talked about what they normally check out from libraries, such as books, CDs and DVDs.  Then Sara told them a little bit about the Smithsonian Libraries and how they differ from the libraries they might be familiar with. She explained that all the Smithsonian Libraries are usually used by people who work within the Smithsonian who need to do research about something specific.

She shared several books from the library about marine life with the children since they were currently studying the ocean.  As they flipped through the books, they noticed that there weren’t many photos, and that they contained lots of words, unlike the books that they might check out from the library near their homes.

On the way out of the library, Sara showed the class an interesting feature of the bookshelves.  She explained that since they have lots of books, and not too much space, the bookshelves are on tracks and can move apart if a book from a particular shelf is needed.

All the children enjoyed taking a turn using their muscles to turn the wheel to move the shelves.

Following their trip to the library, Maureen brought the lesson full circle by reading Waiting for the Biblioburro by Monica Brown, a story about a girl who excitedly waits for Biblioburro, and how his visits inspired her to write her own book.  Maureen then shared a message she had received from Mr. Soriano when she reached out to him on his Facebook page.  He said he is still taking his library to the children of towns near him with his donkeys, Alfa and Beto, and that he always welcome support from people near and far.

She asked the class if they would like to create their own book and send it to Mr. Soriano to add to his book collection.  They were excited at the idea and also had some questions that they wanted to send back to Mr. Soriano.  After this lesson the class corresponded with Mr. Soriano to find out more about him, as well as began their work on their book and a fundraiser for the library.

Stay tuned for an update on Mr. Soriano’s response to the children’s questions, their book project, and fundraiser!