Though our school is not strictly play-based, it recognizes the importance of play and incorporates it into our unique brand of object-based learning. Much like other early childhood schools, you will observe our children engaging in play during classroom choices and playground time. You can also find our children playing in the museums, but not just in the play-based spaces. We think creatively about how to safely incorporate play into our museum or community visits.

Over the years, we have heard from educators that often caregivers don’t appreciate or understand the value of play. I won’t lie, I too, was at one point one of those parents. Before beginning my career in early childhood education, I enrolled my daughter in a play-based cooperative preschool and one of my biggest concerns was if they would incorporate letter/number recognition into the curriculum. That was more than ten years ago and my outlook has drastically changed. 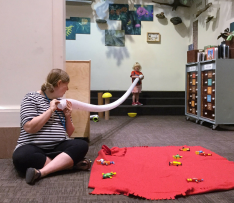 I have also observed sentiments similar in parents today. I recall a specific conversation with a parent whose child had recently transitioned from a play group to a SEEC program. The parent was happy about the transition because she felt like all the kids did “was play.” Through discussions with other educators, in and outside of SEEC, I have found that other parents share a similar concern about the role of play in the classroom.

I don’t mean to suggest that all caregivers feel that play is not important or even that they don’t see ANY value in the act of playing. In fact, there was recently a heated discussion at the school one of my children attends regarding recess. Some of the students had been missing recess due to make up work or for disciplinary reasons and that did not sit well with our parent community. I think it is important to note that there is a range of parent perspectives on play.

At the same time that we have been reflecting on how parents feel about play, our team has also been focusing in how we can support our parent community and the community at large. It occurred to us that our upcoming workshop, Play: Engaging Learners in Object Rich Environments would be an ideal venue to explore parent attitudes towards play and strategize ways we can engage parents in a dialogue about the value of it.

In order to have this dialogue, we feel it’s important to better understand caregivers’ beliefs surrounding play. Therefore, we have begun to collect data that will inform that understanding and thus far, we have hit on some themes: