For many families engaging in virtual learning the delineation between home and school has all but disappeared. Our preschool teachers thought it be helpful to share a few things about how we set up and implement different strategies in our SEEC classrooms. The tools we use at school may also be helpful for establishing routines and daily schedules at home and most strategies are easy to adapt! Today we’ll share some specific techniques about how we set up our school environment to help young children gain independence and success.

Cozy corners provide a safe space for children to go and are needed now more than ever. They help children to regulate their emotions by taking space and time to process. At SEEC, different classrooms set up their cozy corners differently, but they all serve the same purpose. Here is a list of items that might be in a cozy corner:

Labels have a several benefits. First, they help make clean up quicker! When shelves, containers, and or cabinets are labeled, children can figure out where things go on their own. Labels also help children develop their pre-literacy skills; they reinforce the idea that words have meaning. They can be handwritten or printed, as long as your child knows what they are. If you can use images of the actual object, that can be helpful. In the classroom, we label as much as we can including the following:

Using photo instructions: Go over them with your child first. Say the steps as you point to the images. Over time, remind your child to follow the pictures when they need help. Eventually, they will feel confident using the image all on their own. Photo instructions are helpful in the bathroom, for getting dressed, for getting ready to go outside, and more!

Making your own: For these, we try to use real images of the children doing the actions in the instructions, but you can use clip art images, hand drawn images, or whatever you have on hand. Just make sure that you go over them with your child before implementing them.

Tools for Children at Their Level

For example, later in the year we will have friends help set up for lunch. This means putting out the placemats, utensils, plates, cups and napkins. We make sure these are in a low place so they can access so they can have the independence to take on the job themselves. Children also start to help clean up after themselves by stacking chairs and cleaning spills.

This is a very trying time for families with young children. While we offer these ideas to help with structure in your home, finding time to implement them can be hard. Try doing one strategy a month, or whatever timeframe works for you. Caregivers are doing the impossible right now – you’re doing great!

Interested in what else the classrooms and the full-time school look like? Check out the dates for our virtual open houses for the 2021 – 2022 school year.

This week we are featuring Will Kuehnle. Will’s pre-k four classroom is currently learning about Camelot. Below you will find a reflection from Will and images from some of his lessons.

“We were exploring the world of King Arthur and Camelot. The children at the beginning of the year were enjoying the idea of dragons chasing them when we were running around on the playground. Dragons were also popping up during our chatter around the snack table. I definitely noticed an interest. My associate teacher and I put our heads together to think of a topic to explore that would quench the students interest, touch on topics we thought would be useful for the children to have as a foundation for the year ahead (chivalry, community) and also allowed us as educators to have a wide variety of ideas to teach upon, which makes lesson planning fun and flexible.”

“I always want my students to take away a sense of enjoyment from a unit of study. I want them to have that everyday we are together, no matter if we are going on an exciting museum visit or stuck inside the classroom on a rainy day.  For this particular unit I wanted to have each student have a strong sense of what the code of chivalry was, because that can be applied to so many routine situations throughout our day. I wanted to be able to focus my language with children around kindness, bravery, loyalty, community and justice. To be able to do that with such a fascinating backdrop as King Arthur and the Knights of the Round Table was a real treat. Another objective I had for the students was to nurture their sense of adventure and curiosity towards learning. We can take that energy and harness it towards future lessons and topics this year, I’m really excited to see where this year leads us.”

“I believe the way the children used what we were discussing into their play was the most successful. I did not notice it at first, but after a few weeks into the unit the play structures in the classroom were really developing. The dramatic play we had in the classroom, the manipulatives the children were using, the art they were making and the games they were creating on the playground were centered around the world of Camelot. The children were so whimsical in their approach to the unit that you really saw what you were talking to them about sink in. I am able to suggest to a child that they be knightly or chivalrous and see them reflect with positive reaction to the choice they are making.”

“Reflecting back on the unit, which is still going on up until our knighting ceremony on December 18th, I wish that the transition of topics within the unit were more thought out and not as rushed. I think we were really excited to dive head first into something for the start of the year that we barreled through ideas that we could have taken more time on. Maybe it was because we wanted to go from looking at the places of Camelot, to the people of Camelot, to the stories of King Arthur, to the code of chivalry, to how castles were built and protected, etc. As an educator I am trying learn how best to balance all the information there is to know and all the information I believe is best for my students to know, and then unveiling that in a cohesive story line that is engaging and enriching for them. I think having a strong idea of what you want to the overall story to be in the unit when you are first venturing out is very helpful, and that is something I struggled with in this unit. At the same time you always need to be flexible.”

Here a few images from their days in Camelot:

They began their exploration of the topic with the story of the Sword in the Stone. Will had the students create their own stone from a cardboard box and painted paper. They were very surprised and excited when Merlin dropped off a sword later in the day.

To encourage close looking, Will asked the children to create their own illustrations of the sword for their journals. 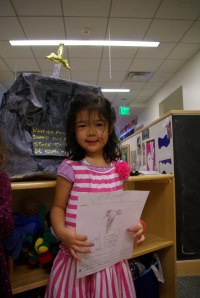 The children were very thorough in their illustrations. Some even included the text found below the sword.

Will also began to alter their classroom to take on the attributes of a castle. Above the students are painting the castle wall and below you can see it installed in their space.

In addition to the castle wall, Will wanted a way to track their their progress through Camelot so they created a board with the different locations they might travel. As part of the board, he also created popsicle sticks with images of the children as their favorite Camelot characters which will move around the board as they continue through the story. 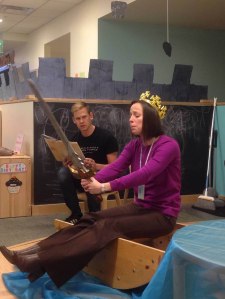 The group was so excited about Excalibur that Will decided to do a theatrical reading of the Lady in the Lake with help from a few educators and our site director.

Their exploration of Camelot even extended out to the playground where they used pool noodles to do some jousting.

The children continue to be extremely excited about this topic and have exciting adventures in Camelot. Be sure to check back for our Teacher Feature next week!