This week we are featuring Stephanie Jimenez, Shawna Williams, and Javacia Finney in our two-year-old Penguin classroom. These twos were deep into a unit on ocean life, and their teachers decided to spend a week learning about a familiar ocean animal, sharks. During this lesson, the class took a trip to the National Gallery of Art to view John Singleton Copley’s Watson and the Shark and compare the painting to what they had learned about sharks in class. Teachers at SEEC have an abundance of interesting objects and artwork to visit with their students. Sometimes teachers choose artwork that may seem unexpected, but is connected to conversations their students have had in class. Watson in the Shark is just one example of teachers choosing an unexpected piece of artwork to create a meaningful museum experience for their students.

Below you will find photos from their lesson and a reflection from Stephanie.

We had been learning about oceans for several weeks, and this week we were focusing on sharks. Our kids love watching the fish in the aquarium in Sant Ocean Hall in the Natural History Museum. They were familiar with sharks and knew that they lived in the ocean, but I wanted this lesson to help them notice the differences between sharks and other fish.

I chose to visit the painting Watson and the Shark because I wanted the children to have a visual of a shark in its natural environment, and then use their imaginations to have a discussion about the painting based on what they already knew about sharks.

I wanted to introduce the children to what sharks look like and some of their behaviors. I wanted them to use what they knew about sharks to tell the story of what could be happening in the painting

I think the lesson was successful because the children were able to learn more about an ocean animal they were really interested in. The painting allowed them to visualize what a shark looked like, and they were able to have a concrete example of what we had been learning about in class. After our week on sharks, we began learning about fishing because the children were really interested in what the people on the boat were doing.

What could you have done differently to better achieve your objectives and expand the topic? What was challenging regarding logistics?  What recommendations would you have for another teacher trying out this lesson?

I would go to the museum ahead of time if possible, to make sure you know the exact location of the painting you want to see to help the lesson go smoothly.

Here are a few images from their lesson on sharks:

Stephanie began the lesson by leading a review of the types of sharks her class had been learning about. They had learned about three different sharks throughout the week, including blue sharks, hammerhead sharks, and dwarf sharks.

The children listened intently as Stephanie read the story Five Little Sharks Swimming in the Sea by Steve Metzger. Counting books and counting songs often have a rhythm that is engaging for young children, which helps to facilitate understanding of early math skills.

Stephanie then led the group in singing and dancing to the song Baby Shark, a song that encourages children to engage with the music with their whole bodies. This song helped the children differentiate between sharks of different sizes, and referenced many physical features of sharks including their fins and teeth.

The class bundled up and headed over to the National Gallery of Art to check out John Singleton Copley’s visually striking Watson and the Shark.

Stephanie encouraged her class to spend a few minutes looking at the painting and thinking about what they saw. She began the discussion by asking simply, “What do you see?” There is a lot to see in this painting, and the children were eager to share their observations. 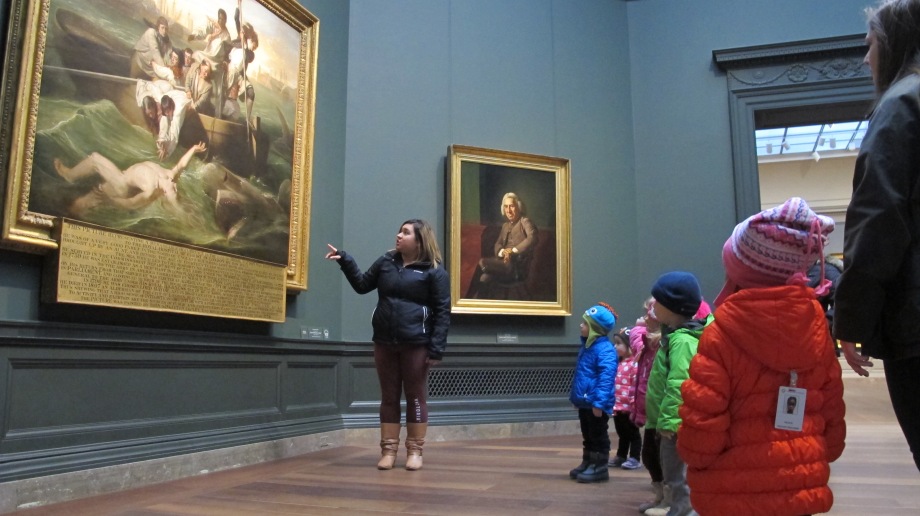 The children noticed lots of details in the painting, including the fact that some people were in the boat but one was in the water. They also noticed the expressions on the faces of people in the boat. Many children agreed that the faces looked sad or scared. Stephanie guided the children’s discussion by continuously asking open-ended questions, including: “Why is that person in the water?” “What were the people doing before this happened?” “What is going to happen?” Some children remembered that sharks are meat eaters and eat other animals and fish. A few children thought that the people in the boat were going to save the person in the water from the shark.

The class spent quite a bit of time looking specifically at the shark, noticing its physical characteristics and thinking about what the shark might be doing. One child commented on its sharp teeth, and thought that it might be hungry. Some children thought that the shark looked like one the types they had learned about in the classroom, the blue shark. 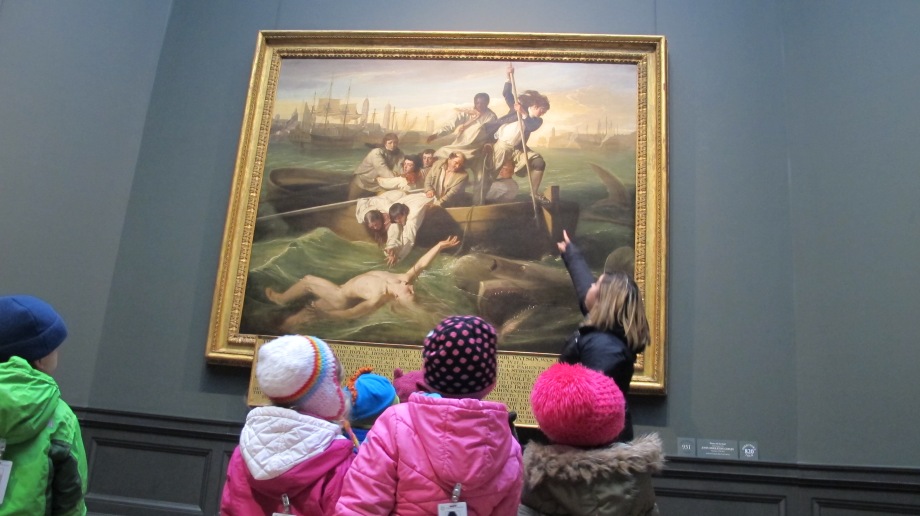 By asking open-ended questions and basing her questions on the children’s observations, Stephanie allowed the children in her class to insert personal meaning into the lesson. The children used their imaginations to tell a story of what was happening in the painting, while incorporating knowledge of shark behavior and physical characteristics.

After learning about sharks, the Penguins continued their unit on oceans by exploring other ocean animals and ways that humans interact with the ocean. Check out our Facebook, Twitter, Instagram, and Pinterest for more ideas from their ocean unit! See you in two weeks with our next Teacher Feature!