This week we are featuring Logan Crowley, Ashlee Smith, and Jill Manasco in our older infant classroom, the Ducklings. These teachers had noticed their children’s budding interest in exploring new places and the world outside of their classroom. These kiddos had spent much of their first year in the classroom learning about themselves, their teachers, and their friends, as well as getting to know their environment and becoming familiarized with being in a museum. That’s a big job for a one year old! As the weather started to warm up in March, these teachers decided to take advantage of the infants’ curiosity and began a unit exploring the community outside of the classroom. The Ducklings visited many locations across the National Mall during this unit, helping familiarize their kiddos with what their next several years at SEEC will be like. I accompanied their class on a trip to the National Museum of the American Indian to visit the museum’s interactive playspace for young children, imagiNATIONS.

Check out some photos from this lesson below, as well as a reflection from Logan, Ashlee, and Jill!

We were interested in visiting new places in our community that we had not have been before. We chose to go to the ImagiNations Activity Center at the National Museum of the American Indian so that the class would be able to explore a new space where it would be okay for them to play, run and touch things in the area.

We chose ImagiNations because it was new to us and we knew it was ok for the children to be loud. It is a great space for older infants in that we were able to touch everything and it was not too far of a trip for us since the children tend to fall asleep if our trips are too long.

The goal of the lesson was that we wanted to familiarize the children with other spaces in the Smithsonian community. We also wanted to practice being out the buggies in a large space, walking and holding hands with teachers, and each other as well. We had been to the American Indian Museum before but this was our first time going to ImagiNations. We wanted the children to able to explore whatever caught their attention in the space.

Our trip was successful in that we were able to explore the many elements of the space. The people who work in ImagiNations were great and very attentive to our needs and the children’s interests. They brought out an animal pelt for us to feel while we explored the inside of the tipi. They also invited us to their story time which would have been great if our class was just a little bit older but our students were much more interested in exploring. They wanted to run and play in the houses since everything was new to them.

What could you have done differently to better achieve your objectives and expand the topic? What was challenging regarding logistics? What recommendations would you have for another teacher trying out this lesson?

One of the biggest challenges we encountered was the long walk from the front of the play space where our buggies were parked to the play area. Some of them were not as steady as others and they were not used to holding hands at all times with either a teacher or another classmate, so it was challenging getting them all into the space. I might have also brought more things for them to interact with and hold on to once we were done with the lesson. Each child was given a picture to carry with them when we left our classroom, but many were lost on the trip.

Here are some photos of the Duckling’s lesson on their community:

Infants and young children can always benefit from a little repeated exposure. Before the class left SEEC, Jill showed the children a few photos of some of the things they would encounter at the American Indian Museum. Each child was able to hold onto a photo  — a great strategy for a long trip in the buggies.

The walk to the museum also provided lots of opportunities for the children to notice familiar buildings and landmarks on the National Mall.

When the Ducklings arrived at the museum, they headed straight upstairs to imagiNATIONS on the third level.

Right away, the Ducklings were excited to be in the space. It is a rare occurence for a one-year-old to be able to freely move their body and use their hands to touch in a museum. This was an exciting change of pace! The children immediately began exploring everything the exhibit has to offer. They especially enjoyed going inside of the different types of homes, including a tipi and an Amazonian stilt house.

Inside the tipi, many children were excited to explore the artifacts, hear about the importance of the buffalo, and especially feel the texture of its fur.

The outside of the tipi also provided plenty of opportunities for exploration, and a few surprises…

The space between the bottom of the tipi and the floor was the perfect size for these infants to crawl under!

The kiddos also enjoyed exploring the inside of the Amazonian stilt house and the objects within. Their favorite element was the ramp leading up to the entrance. The Ducklings loved to run up and down the ramp!

While Logan, Ashlee, and Jill helped the Ducklings make connections between their own homes and the homes in the exhibit, the visit was also a great opportunity for the kiddos to explore a new space within their community on the National Mall. The large windows in the space were a big draw for the children, and helped remind them of where they were in relation to other familiar buildings. 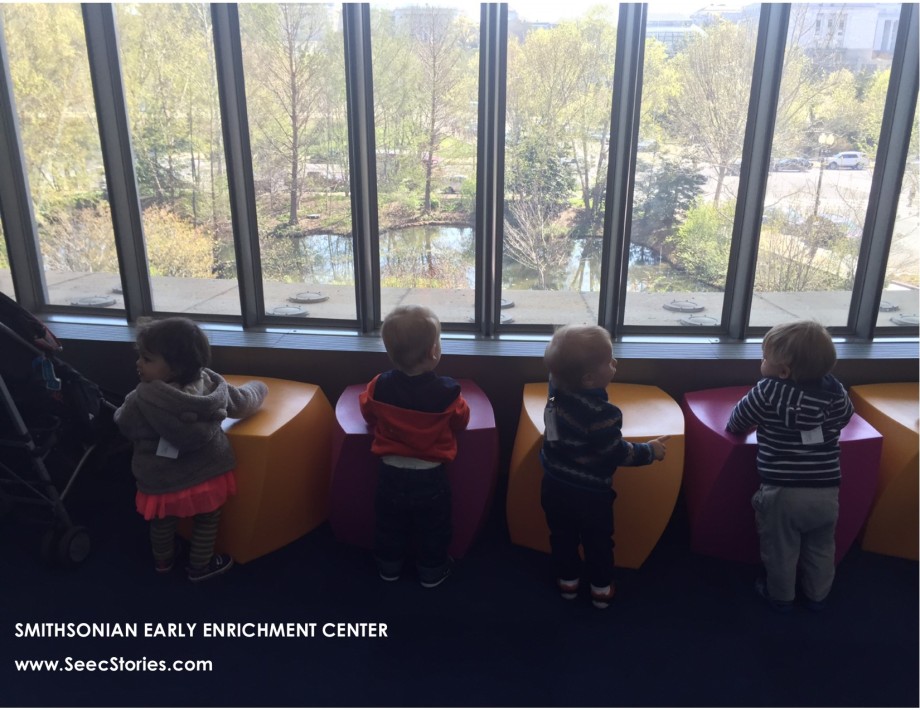 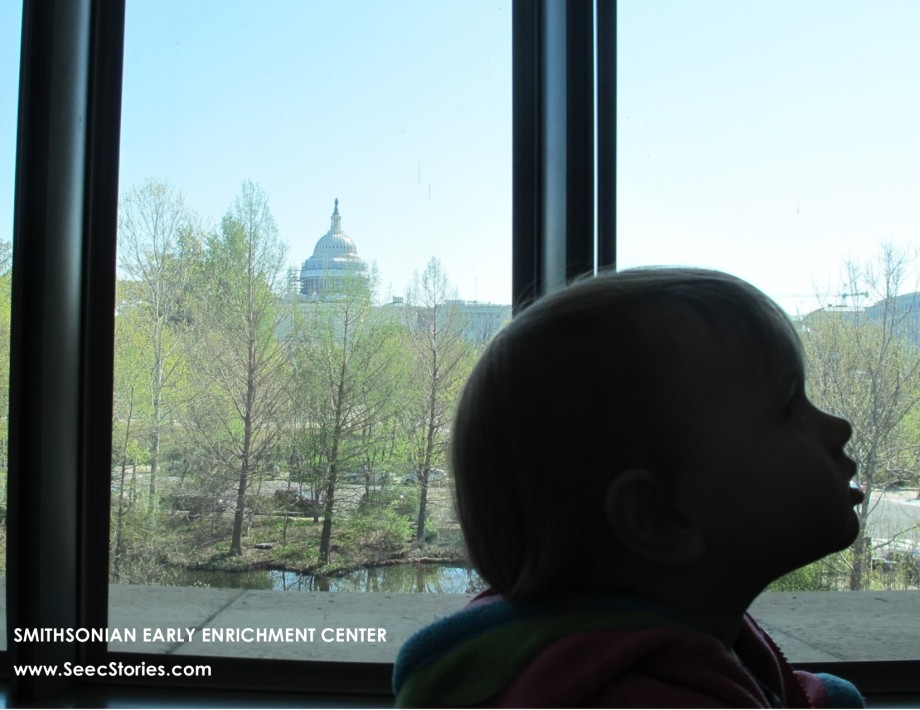 During their unit on community, the Ducklings got to explore many new and exciting parts of the world around them. They spent quite a bit of time exploring the National Museum of Natural History, checked out the trains down at the Metro station, enjoyed the warm spring weather in the Smithsonian Gardens, and even made the trip over to the Renwick Gallery to visit the WONDER exhibit! This unit was a great way for these infants to get acquainted with all Washington D.C. has to offer as they make the transition to their toddler year. Check out our Facebook, Twitter, Instagram, and Pinterest for more ideas from their unit on Community! See you in two weeks with our next Teacher Feature — and a very happy new school year to all!