We recently decided to start up our own book club and chose The Scientist in the Crib: What Early Learning Tells Us About the Mind for the club’s second meeting. We featured this book in a recent blog post “From Blobs to Beings: An Overview of Research on Baby Brains” and it made sense for us to come together as a group of professionals to think more about it. In the course of our book club discussion several topics emerged including teaching empathy, learning, and language. Below are some highlights from our discussion.

The Scientist in the Crib explained that “real empathy isn’t just about knowing that other people feel the same way you do; it’s about knowing that they don’t feel the same way and caring anyway” (p. 39). The authors describe an experiment during which they provided young children with broccoli and goldfish and then requested some broccoli from the children. Children younger than 18 months, gave the researchers goldfish, despite the researchers requesting broccoli. These children cannot fathom someone wanting anything that differs from their own desires, which in this case are clearly the tasty goldfish. By 18 months, children realize what they want may actually be different from what someone else wants, hence they are willing to give broccoli to the person who requests it even if goldfish seem like the only logical choice to them  (p. 38-39). 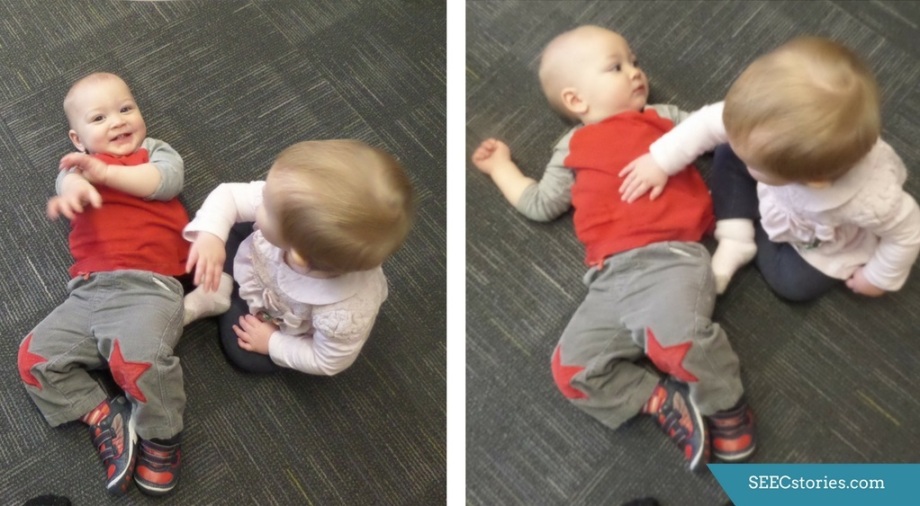 This example of young children showing empathy was shared at book club. The teacher described the situation by explaining that one of the children in her class was feeling upset and another child crawled over to pat the child’s belly, which made everyone feel better.

Our discussion began largely by sharing examples of young children being empathetic in our own classrooms. The teachers fondly recalled examples of young children acting emphatically for the first time. There was a discussion about a toddler offering to help zip up their friend’s jacket and another example of a young child who was barely talking going out his way to find a sad child’s favorite toy in hopes of making the child feel better. These examples of young children showing empathy were clearly some of the teachers’ favorite memories of their past classes. The teachers also talked about how important it was to teach social emotional learning, because according to one teacher “children need to learn how to become people”. We concluded that teachers need to focus on teaching empathy as well as teaching the classic academic skills in their classrooms.

On Learning and Language

Much of The Scientist in the Crib featured the different ways that babies learn about the world around them and it devoted a whole chapter to children’s development of language.  As a group, we talked about how difficult it can be to learn a new language as an adult and how baby’s brains are better suited for the task than adult brains. 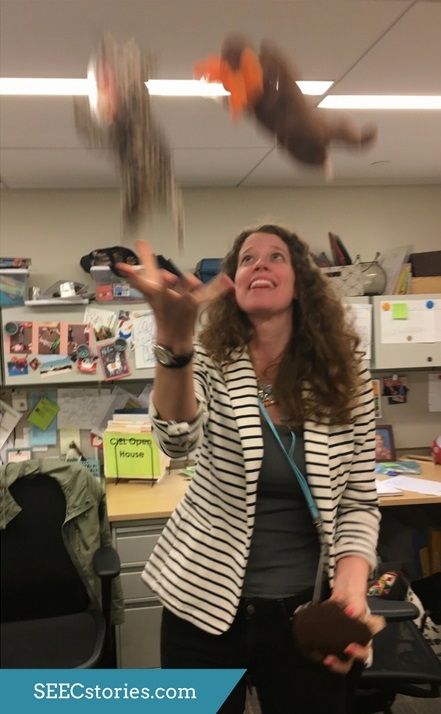 Brooke demonstrating her juggling, which she used as an example of something that she learned to do as an adult.

Babies are learning far more than just language as they develop. In fact, since everything they experience is brand new, they are actively learning about everything. As adults, we rarely get to experience the challenge of learning something completely new. This is yet another difference between adult learning and children’s learning. One participant, Brooke, brought up the challenge of learning how to juggle as an adult. She explained that it was “Simple once you get it; you can actually move your hands and stop paying attention.” But before you get to that point it was “super hard!” From the discussion of the difficulties of learning a new language and learning how to juggle, we noted how hard we had to work to accomplish our goals and we were amazed by just how much and how quickly infants and young children are able to learn. Throughout our discussion we became more and more amazed by the infant brain.

As we were concluding our discussion one participant said “I think this book should be required reading!” When pressed about who should be required to read The Scientist in the Crib, the group decided with a resounding “everybody!” The benefit for parents and caregivers seemed obvious. In fact, one book club participant had texted the paragraph on the “deliberately perverse” two years to a friend of hers who was currently experiencing that phenomenon (p. 39).

In addition to parents and caregivers, we discussed how policy makers should read this book so they can gain an understanding of the importance of early childhood education. We concluded that everyone was a child once and will probably interact with a child at some point and this book would help people gain an understanding of their own brains as well as the brains of young children.

Catch us next time when we will be reading For White Folks Who Teach in the Hood, and the Rest of Y’all Too by Chris Emdin.