Our recent Teacher Feature highlighted a lesson on set design. This lesson was part of a larger unit on theater. The two year old class explored theater for several weeks before they decided to put on their own play based off the book Abiyoyo by Pete Seeger. The web below shows the different activities, museum visits, and books that the teachers Melinda Bernsdorf, Brittany Brown, and Brittany Leavitt used to teach their class about theater. For more details, take a look at some of the photos from their lessons, which serve to supplement the web. 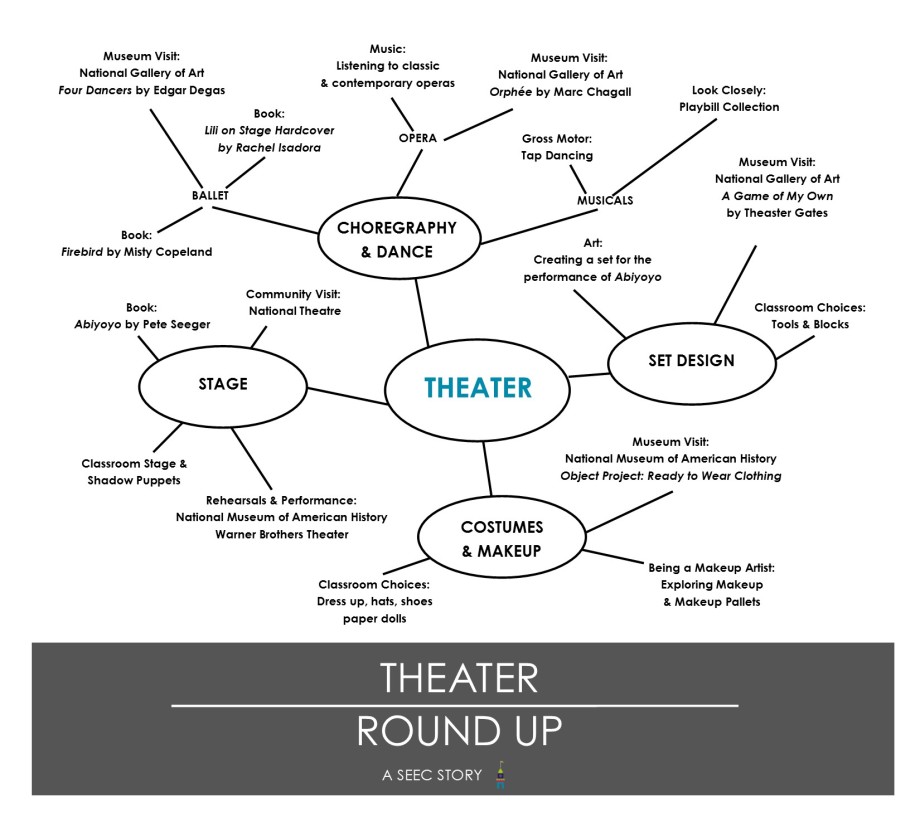 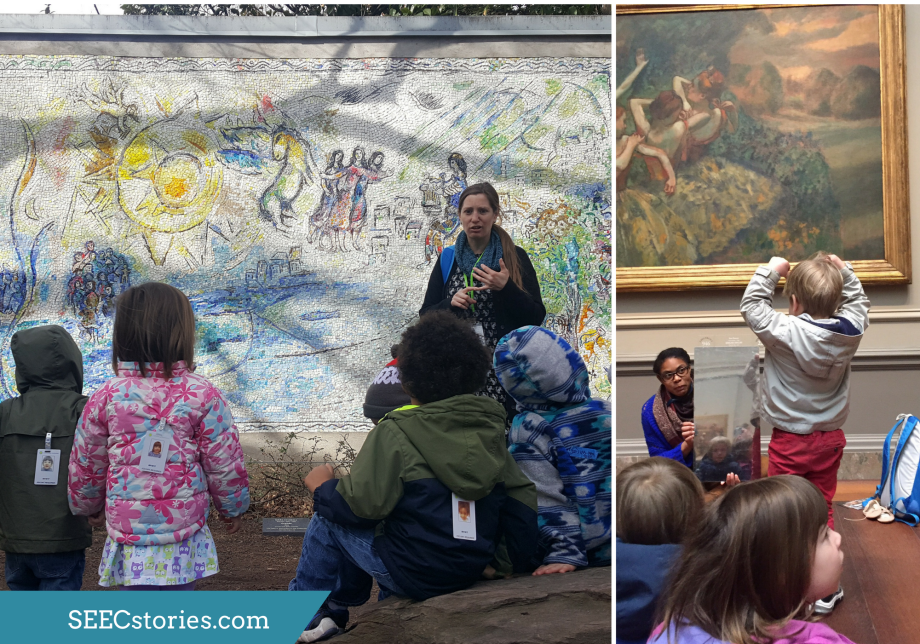 The class began their unit by exploring different ways that people perform on stage. When learning about ballet, the class visited the National Gallery of Art to look at Four Dancers by Edgar Degas. While in front of the painting, the class noted the poses of the dancers and practiced their own poses using a mirror that Brittany Leavitt brought into the gallery. Opera was another type of performance that the class talked about. While learning about opera they went to the National Gallery of Art’s Sculpture Garden to look at the large mosaic Orphée by Marc Chagall.

They visited National Theatre where they stood on stage, sat in the audience, explored the orchestra pit, and experienced sitting in the balcony. Visiting a working theater gave the class a greater understanding of the plays and performance.

They transformed their classroom into a theater! Melinda Bernsdorf, Brittany Brown, and Brittany Leavitt hung red ribbon from the ceiling and repurposed a large wooden box as a stage. For their performance of the play Abiyoyo, which Melinda Bernsdorf, Brittany Brown, and Brittany Leavitt adapted from the book by Pete Seeger, the two year old class made their own costumes. The costume for the giant Abiyoyo was made by using paper plates, paint, and string. The class used these costumes while performing their play on stage in front of their families.

In addition to costumes, the class explored stage makeup. Before becoming makeup artists, the class learned about colors and palettes. Then they used one of their teachers, Brittany Brown, as a model. Each child was given the chance to put on Brittany’s stage makeup to get her ready for her performance.

To learn about set design, the class went on a variety of museum visits to be inspired including visiting the special installment “In the Tower: Theaster Gates: The Minor Arts” at the National Gallery of Art. By looking at A Game of My Own by Theaster Gates from the side and even from below while laying on their bellies, the class was able to see the internal structure of a seemingly flat piece. This proved to be useful when they assembled their own set. The class used the knowledge that they gained to create their own set. Making the set involved the whole group’s efforts and took several weeks to completely compile, since they had to create something large enough to fill up the whole stage.

After a complete tech week and several dress rehearsals the class preformed their verison of Abiyoyo in front of a set that they had created and wore costumes that they made. In the audience sat the class’s close friends and family.