This week we are featuring Krystiana Kaminski and John Fuller of the four-year-old Cinnamon Bear classroom.  The class had just finished a long unit on the performing arts, and noticing the children’s interest in the emerging cherry blossom blooms, and Kusama’s exhibit at the Hirshhorn (an artist from Japan), decided to spend some time learning about Japan.  I joined them for a visit to the National Gallery of Art where they looked closely at an artwork that Robert Rauschenberg created while spending time in Japan.  They connected this piece to the Japanese holiday, Kodomo No Hi, or Children’s Day.  Below you will find images and descriptions of the lesson, and a reflection from Krystiana.

Here are a few images from their lesson on Kodomo No Hi: 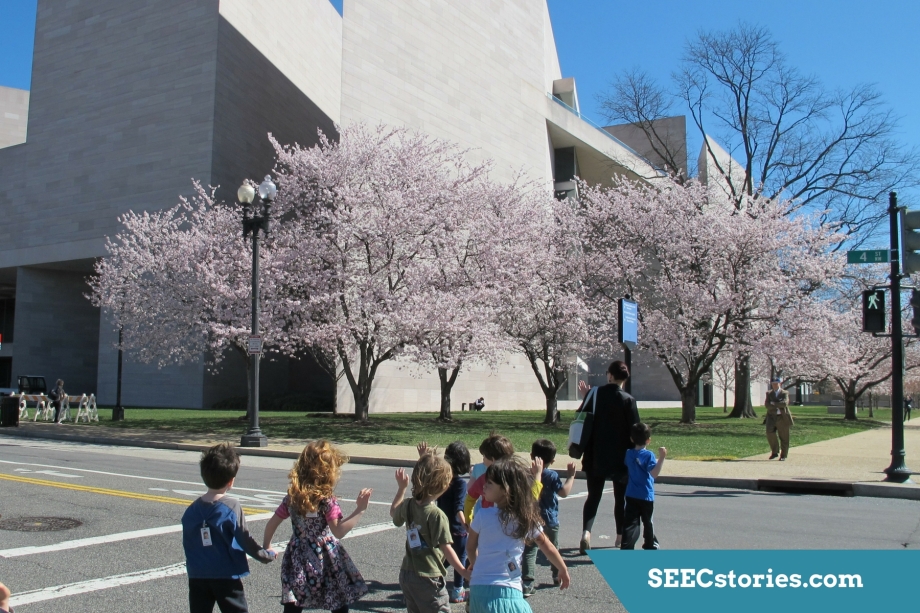 The class began their morning by walking to the National Gallery of Art.  Along the way they spotted cherry blossom blooms that were just starting to emerge around the city.

Once inside the museum, the class found Robert Rauschenberg’s Wall-Eyed Carp/ROCI JAPAN.  They read a book that one of SEEC’s educators created to give some background about Rauschenberg’s artistic life, including his international art project, Rauschenberg Overseas Culture Interchange (ROCI).  ROCI allowed Rauschenberg to travel around the world, meeting with other artists, learning about their culture and how they made art.  This piece that the class visited is an artwork Rauschenberg created while in Japan. After reading the book, Krystiana asked the children to look carefully at the artwork, and make observations about what they saw.  The children sat for a minute silently looking and then began sharing observations.  Krystiana went down the line and asked each child to share something they observed.  One child noticed an area on the painting that looked like lightening, another observed that there might be tissue paper on the artwork because there were lines that looked wrinkled.  The class also noticed green blobs, a map, a crane, photos, and a big fish. 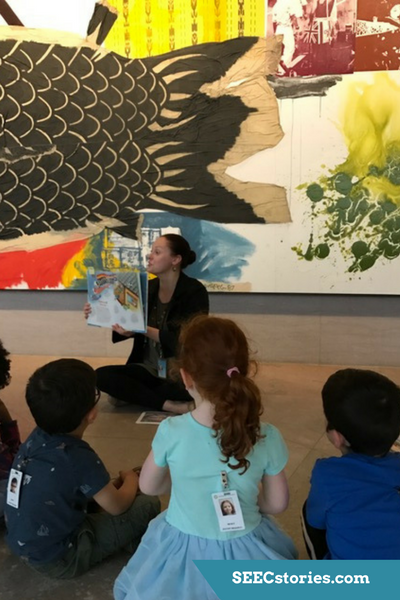 Krystiana congratulated the class on their concentration and thoughtful observations.  She explained that the fish is a carp, which is seen often during a holiday in Japan – Children’s Day or Kodomo No Hi, which celebrates how wonderful children are.  She read a section of All About Japan by Willamarie Moore, and illustrated by Kazumi Wilds to learn more about Kodomo No Hi.  She let the children know that if they wanted to learn more about Japan, they could look in the books that afternoon in the classroom.

Next, Krystiana explained that the big carp on the artwork was in fact a big carp kite, and she brought out a carp kite that she had made herself.  She asked the children why they thought carp might be important to this holiday.  The children had lots of ideas including, “they have scales, and because you catch them and it’s yummy”, and “because it’s [Japan] is an island and there’s lots of fish around”.  Krystiana explained that when carp travel in the water, they go up stream and it takes a lot of power and speed to swim against the flowing water.  She said that the carp have to have lots of perseverance to keep trying even when it’s hard.  She went on to say that these traits (bravery, strength, and perseverance) are what families want their children to have, which is why carp are a symbol of Kodomo No Hi.  The children discussed and agreed that their families wanted them to have these traits.  They also discussed what else their families wanted for them. 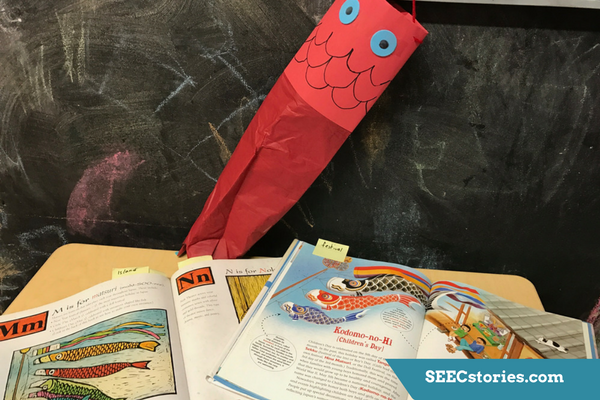 Back in the classroom, Krystiana set out the books that she had brought to the museum and encouraged the children to do their own research to learn more. Many of the children sat with the books, looking through them and asking questions of their peers and teachers. 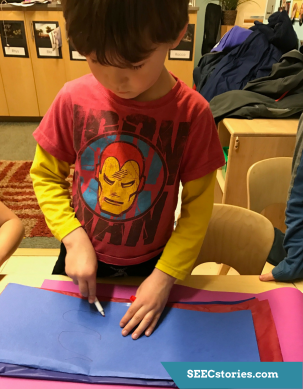 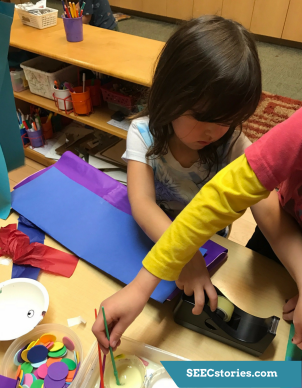 They also made their own carp kites like the large one that they had seen on the artwork. First they chose a large sheet of colored construction paper, and folded it in half lengthwise.  Next they colored the paper in any way they liked.  Then, they chose colored tissue paper and taped it to the construction paper. 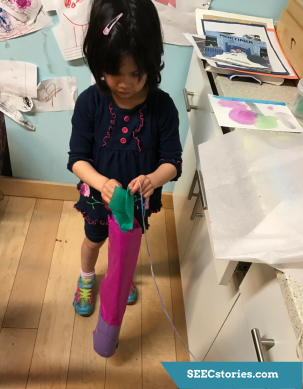 Krystiana then rolled the papers together and stapled them.  Finally, the children chose colored string to attach to the carp, and added eyes and any last touches.  The children hung up their carp in the classroom so they could look at one another’s and share them with their families.  Some children even named their artwork.   For example, one child said, “this is my ‘Four-Eyed Carp'”.

A few weeks later, the class revisited their kites, and took them out to fly on a particularly windy day!

A reflection from Krystiana:

We did a two week exploration of Japanese culture, food, art, and people.

How did this topic emerge? What inspired you/how did you decide to explore this topic?

We had just finished a long unit on performing arts and were beginning the process of figuring out what our next topic would be. As a school using emergent curriculum we base our units on the children’s interests. The children had been learning about Yayoi Kusama in art class, and were very excited about our upcoming trip to see her work at the Hirshhorn Museum and Sculpture Garden. The cherry blossoms had also just begun to bloom so we thought doing a short unit on Japan would be a good idea.

The carp-shaped koinobori flag is an important symbol of the Children’s Day festival in Japan, and is a prominent part of this piece. The piece is also large and vibrant, which I thought would be visually appealing to the children.

There were two main things I wanted them to take away from the lesson. The first, was the story of why the carp was chosen to represent Children’s Day.  The carp is meant to symbolize strength, courage, and perseverance as the carp has to fight the current to swim upstream. I wanted the children to make a connection to their own home life in how their parents want them to grow up to be brave and strong, and parents in Japan want the same for their children. I also wanted to connect to a previous lesson on perseverance and how important that is in our everyday life. The second objective I had was in relation to the other small photos that were on the piece. I brought some books with me and wanted to encourage the children to use them as resources later in the classroom to answer questions about other things they might see in the piece.

How did you prepare yourself for this lesson (did you know about this topic beforehand or did you have to research)?

I spent a few years in Japan as a child, so I was familiar with some aspects of Japanese culture. I did do more research into the symbolism of the toys, food, and games that are part of the Children’s Day celebration and tried to include some of them in the lesson.

What was most effective about your lesson?

The children loved the piece and were very enthusiastic about using their “eagle eyes” to point out little details they noticed. I brought a koinobori that I had made and used it while I talked about how challenging it must be to have to swim up a river. The children made some interesting connections about how they were strong just like the carp. We also had an interesting discussion about their families and all the things their parents want for them.

How did the lesson reach your objectives and expand the topic?

I think most of them made the connection to how just like the carp, they too can persevere in their everyday life. I think the more challenging connection was in relation to how families in Japan want the same things as our families do. I believe a few children made that connection, and during the rest of the unit we tried to continue to touch on some of the similarities we all share.

Were there aspects of your lesson that were ineffective? If so, was that okay?

I think I may have tried to do a little too much in the lesson. Between making observations about the piece, reading a book on the artist, talking about the story of the carp, and talking about the books we can use for research, I lost some children’s attention. Though for the most part, the children were interested and participated well during the lesson.

What was successful in terms of your preparation and logistics?

The children liked the carp kite I made and were excited that they would get the chance to make their own later. They also seemed interested to get a chance to do some research about Japan on their own.

If there were any challenges regarding logistics, what were they and how did you deal with them?

There was a line on the floor in front of the artwork that I had them all sit on. While it did help them sit down easier, it made it harder for the children on the ends to see and hear. In the future I would stick to making a half circle around the artwork instead.

What could you have done differently to better achieve your objectives and expand the topic?

I needed to tighten the lesson and make it more focused.  At this age their attention spans are short and I would have liked to make the take-aways more clear and concise. Also, I think they may have benefited from a hands-on activity. Next time I may have them add body parts to the carp kite I made, or use their own bodies to try to swim upstream a river while in the museum gallery.

What recommendations would you have for another teacher trying out this lesson?

Make sure you have a clear idea of exactly what you want the children to take away from the lesson and have more hands-on activities.

After this lesson has your thinking changed?

I love learning about different cultures and I hope I sparked the children’s curiosity to learn more as well.

How did you follow this lesson (what topics were explored)?

We made koinobori and took them out on the National Mall to fly a few weeks later! We also learned about how the cherry blossoms were a gift to the United States from Japan and played games under the cherry blossom trees. During the unit, the children ended up loving the book, Three Samurai Cats: A Story from Japan by Eric A Kimmel.  In the book there’s was a line about finding strength in stillness that resonated with them. We used it as a calm down tool for many weeks. The children would sit with their legs crossed, take deep breaths and find their inner samurai. It was pretty awesome!

The Cinnamon Bears continued to explore Japan for another week before launching into a new unit. Stay tuned for the Japan Round Up for more ideas from their unit!