Today’s Teacher Feature highlights the Dragonflies, a toddler class. The teachers, Lauren Bundy, Katherine Custer, and Emily Romig choose to explore karaoke. The class visited David Hockney’s Snail Space at the Smithsonian American Art Museum and later that afternoon had a karaoke party in their classroom. See below for pictures highlighting the lesson and for a reflection from the teachers. 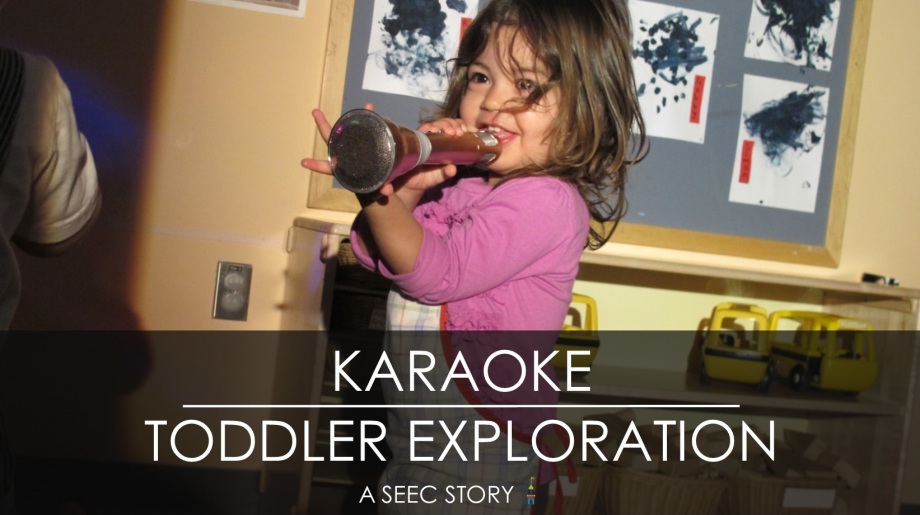 The teachers knew that they wanted to teach their class about karaoke but were initially unable to think of an object that would help support their lesson. They thought about seeing a microphone as an object but decided that simply seeing a microphone might not provide the type of experience that they were hoping for their class. After brainstorming, the teachers decided to bring their toddler class to see David Hockney’s Snail Space at the Smithsonian American Art Museum. The teachers believed that they could use the light, colors, intimacy of space, and stage like atmosphere to draw connections to karaoke. 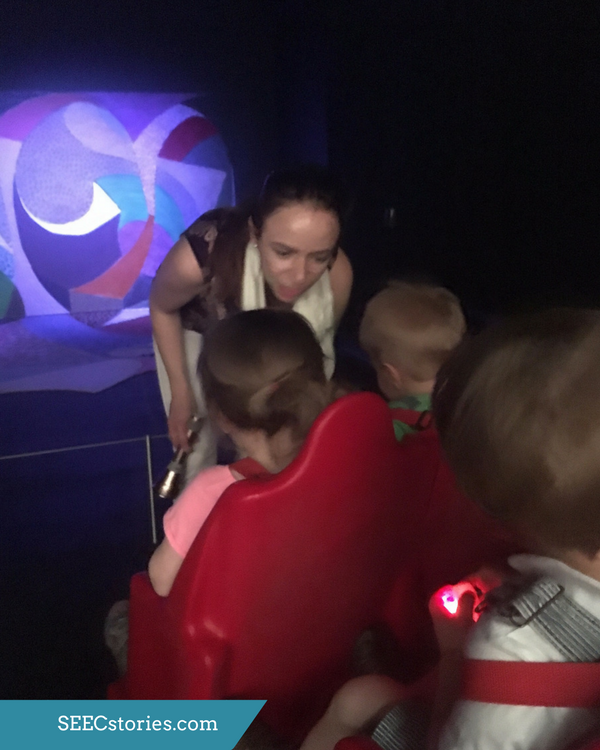 The teachers did not ignore the importance of a microphone for karaoke. Lauren Bundy choose to bring a microphone as an object to explore while the class was experiencing Snail Space. Lauren gave each child in her class the opportunity to speak into the microphone and hear how their voice changed. Light was another topic that the teachers were hoping to explore with their class since karaoke performances often involve a light show. As part of the instillation of Snail Space color changing lights are projected onto the two canvas’ and floor space design. In addition to experiencing the light that is part of the performance of Snail Space, the teachers brought battery powered tea lights to allow the children to explore and manipulate their own light. While experiencing Snail Space, the toddler teachers sang some of their class’s favorite songs and used the stage like atmosphere of the installation to discuss the experience of performing karaoke. Back in their classroom, the toddlers were able to put on their own karaoke show. The teachers transformed their classroom by setting up an overhead projector as a spotlight and used a color changing light. They used speakers to play their class’s favorite tunes and gave the children a chance to perform with a microphone. 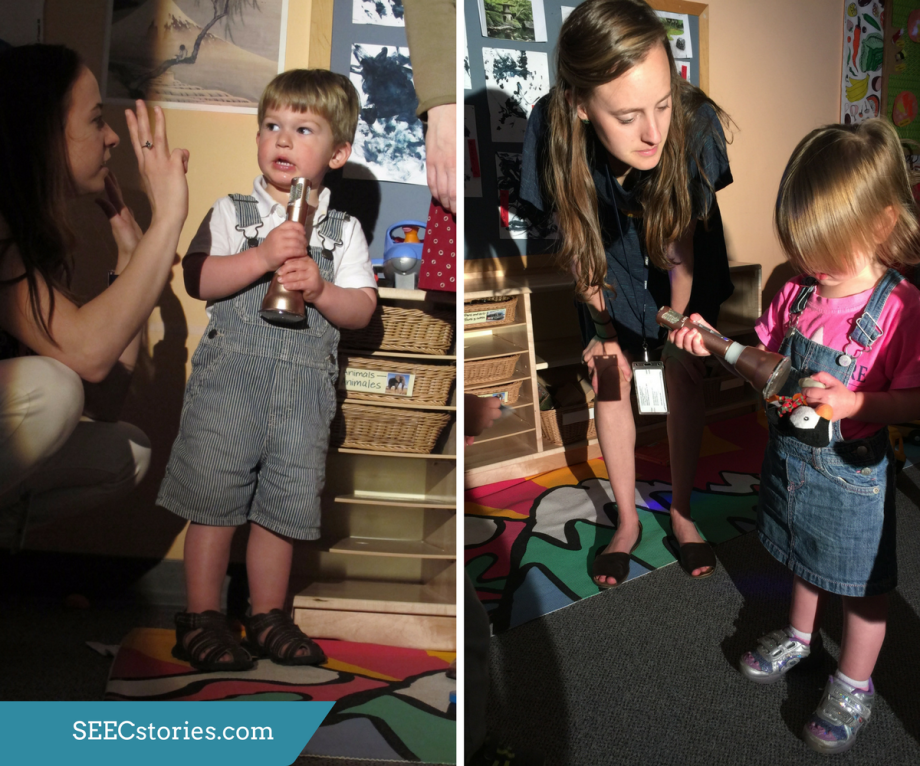 While experiencing karaoke, the toddlers also participated in social-emotional learning. There was only one microphone which meant that the toddlers had to practice taking turns. In order to help facilitate taking turns, the Dragonfly teachers gave the children verbal and nonverbal warnings to help the children be more fully aware of when their turn was over. The Dragonflies karaoke party was tons of fun! Each child was able to experience the joy of choosing their favorite song and performing it in front of their friends.

How did this topic emerge?

After a week of lessons that involved visiting Yayoi Kusama’s Infinity Mirrors at the Hirshhorn Museum and picnicking under the blossoming cherry trees by the Tidal Basin, a theme started to emerge that would become our next unit of study: Japan! We were excited about the topic because learning about another country can offer our toddlers a great variety of experiences to explore. So far, we have ventured into topics such as sushi, tea, koinobori (carp streamers), ink wash art, and now karaoke! We had a hunch that the Dragonflies would be interested in karaoke because they dance and sing all the time in the class – with or without music.

What topics were explored?

Our learning objectives were to talk about how karaoke originated from Japan and how it can not only be an exciting activity but a way to unwind as well. The week before, we had taught the Dragonflies about rock gardens, raking sand, and plants. We talked about how these activities could be “relaxing” and that idea really stuck with the Dragonflies. They would start to talk about how they “relaxed” at home by looking at a “book” or sitting in a “rocking chair.” Since this idea of finding a way to emotionally wind down had already permeated the class, we were able to connect it to the topic of karaoke.

To connect this topic to Japanese karaoke, we talked about how there are people in Japan who work very hard at their jobs and after a long week, they might perform karaoke with their close friends. We talked about how karaoke is one way to relax after working really hard. When we had our karaoke party with the Dragonflies, we did it at the end of our school day. Since then we have returned to it again and again in the afternoons. The Dragonflies loved karaoke!

How is this a developmentally appropriate practice?

Singing and dancing play an important role in toddler development. It helps the Dragonflies to learn social emotional skills like turn taking and listening to each other. They are learning cognitive skills by noticing the patterns and sequences of songs. They are developing their language skills as they sing new words. And they are also developing their physical skills as they dance to the new music.

What was our museum visit and object?

As for the visit, we decided to see David Hockney’s Snail Space at the Smithsonian American Art Museum. We choose this work of art because it gives a sense of space that is meant for a performance. We could have gone the route of visiting an exhibit that featured a microphone, but we decided that the object of a microphone on view might be too small of a feature to warrant enough attention from the toddlers. So why not visit a more immersive space, which is set up almost like a stage, and bring our own microphone?

In addition, David Hockney’s Snail Space is an intimate and secluded area compared to the large galleries that we often find ourselves in. We were able to connect the physical space of Snail Space to the tradition of Japanese karaoke. In Japan, it is customary to preform karaoke in a small private room often called a karaoke box in front of your close friends. The intimacy of the actual space in Snail Space draws parallels to what one might experience if they go to a karaoke box in Japan. Since our class were the only people in the space, the Dragonflies had the added bonus of experiencing it with some of their closest friends.

How did the lesson reach the objectives and expand the topic?

We actually had two separate lessons on karaoke that day. One being the museum visit in the morning, the other being the actual karaoke party in the afternoon. At the museum visit we talked about how the art space was like a stage and we asked the Dragonflies about the different colors they saw in the lights. We then gave each Dragonfly a tea light that they could turn on and off and watch it change colors just like in the art piece. We also brought the microphone so the Dragonflies could hear their voices amplified in the space.

There were a few hiccups in the museum visit. The first was that a fire alarm went off in the museum and so we had to exit. (Just to clarify, we were there before the museum actually opened, so the alarm was most likely a test.) Another oops was when one of the Dragonflies dropped their tea light and it rolled onto the art on the other side of the barrier.

At the karaoke party in the afternoon, the Dragonflies had a blast. We turned off the lights, used an overhead projector as a spot light, and then turned on the disco lights. We had compiled a list of the Dragonflies favorite songs with the help of parents. The Dragonflies then took turns singing their favorite song, while the others got to dance to the music.