It’s teacher feature Thursday and this week we are featuring a lesson from one of our toddler rooms. The class visited the United States Navy Memorial to learn about sailors, which was part of their unit exploring heroes. The class began with a circle in the classroom where the teachers, Maya Alston, Erica Collins, and Elizabeth Kubba, introduced vocabulary and ideas about sailors. The class then walked to the United States Navy Memorial where they further explored these ideas while looking at The Lone Sailor statue, 26 high-relief panels that show elements of Navy life, and the signals flags. Below you will find images from the lesson as well as a reflection from Maya, Erica, and Elizabeth.

Here are some images from the lesson:

The lesson began with a classroom circle where Elizabeth read US Navy Alphabet Book by Jerry Pallotta (Author), Sammie Garnett (Author), and Rob Bolster (Illustrator). This toddler class’ interaction with the book was unique in that the children were encouraged to touch the pages. After Elizabeth read a page, she would pause and go around the circle giving each child the opportunity to reach out and touch images in the book. Sometimes she would guide them by asking “Can you find the boat?” and at other times she would narrate what they were drawn to, “Oh, you found the sailor’s hat!” This technique helped the class connect to the book, stay engaged, and ultimately built pre-literacy skills.

In addition to the book, the class had the opportunity to explore objects during the classroom circle, such as a Navy uniform. The class not only looked at, but also touched the uniform. This helped them build a deeper understanding of the uniform so they could relate it back to the book they had just read and later to The Lone Sailor statue at the United States Navy Memorial. 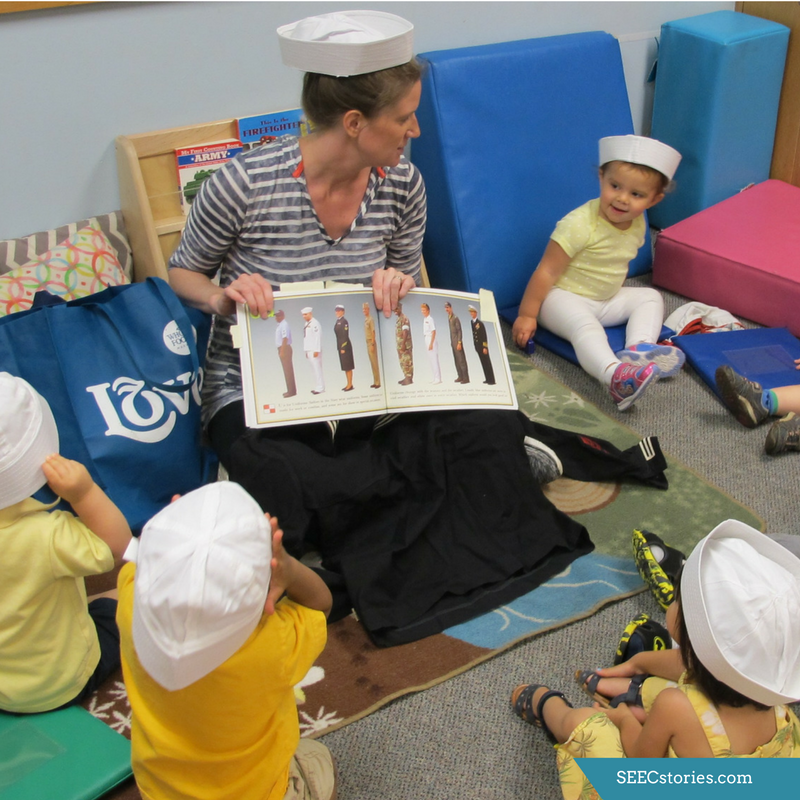 Each child was given a white child-sized Navy hat, which they could play with during the lesson. Elizabeth passed out the hats when she got to the page on Navy uniforms and then allowed the children to interact with the hats for the rest of the lesson. Passing out the hats in the middle of the story helped to re-engage the class with the circle and refocused their attention.

After circle, the class was given the opportunity to play more freely with the hats. They explored flipping them upside down and pulling the brims over their eyes. As the class was getting ready to leave, Maya, Erica, and Elizabeth gave each child a choice, they could either wear their normal sunhat outside or they could wear the Navy hat. Some children chose their normal hats and some chose the Navy hats. Giving toddlers a choice between two things can help ease anxiety around a transition, can help build their own autonomy, and can also help develop their communication skills.

Once the class arrived at the United States Navy Memorial, they gathered around The Lone Sailor Statue. In order to orient the class, Elizabeth showed images from the US Navy Alphabet Book. This helped to build connections between activities they had done in the classroom and being at the Navy Memorial. The teachers then asked the class a series of both open-ended and guiding questions including “What do you see?”, “What could his job be?”, “What can you find?”, “Can you find his hat?”

While class was talking about the things that they saw, one child pointed out the flags. The teachers commented that the flags on the mast looked similar to the some of the flags in the book. Since there was clearly an interest in the flags, Maya, Elizabeth, and Erica made a point of bringing the class closer so they could get a better look. While looking at The Lone Sailor, Maya, Erica, and Elizabeth pointed out the uniform and explained that it is one way to identify him as a sailor.  They noted the hat and compared the sailor hat to the ones on the children’s heads. They then encouraged the class to take a closer look. Some of the children chose to interact with The Lone Sailor statue. One even gave him a hug around the leg. The class then walked around the rest of the memorial, which included 26 bronze sculptures. Each sculpture offered many opportunities for discussion. The teachers followed the children’s lead. If a child pointed to something, the teacher would make a remark. Sometimes the teachers simply narrated what the child was doing. Other times the teachers asked questions like “How would you feel on a boat?” or “What do you think she is doing?”

While the whole class explored the bronze sculptures at the same time, each child was allowed to move and explore at his or her own pace. It was clear that some children found certain elements of the bronze statues more captivating than others. When a child found something that drew her or his attention (like the chain above), that child was permitted to take the time he or she needed to explore before moving on to the next statue. Splitting the children into three groups, one group for each teacher, helped to make this possible.

A reflection from Maya, Erica, and Elizabeth:

Our toddlers seem to love superheroes. They often have Batman, Superman, Spiderman, Captain America, and Wonder Woman logos on the hats atop their heads, the shirts covering their bellies, and the shoes on their feet. In addition to these fantasy superheroes, our toddlers also spend a lot of time playing with firetrucks, marveling at sirens of ambulances and police cars, and giving a cheerful high five to the security officers who work in our museums.  We noticed these interests and decided to build a unit around the real-life superheroes in our community. Our goal was to help our class to grasp the idea of what being a superhero really is (someone who helps and protects others), to be able to recognize key characteristics of these community superheroes (uniforms, modes of transportation, etc.) and some of the ways these superheroes help and protect us (what do they actually do). During this unit we studied firefighters, military service members, doctors, nurses, park rangers, and the United States Park Police. Here, we will dive more deeply into one specific lesson, our lesson on sailors in the United States Navy.

For this lesson, we chose to visit the United States Navy Memorial. At the memorial, there is a large bronze statue called The Lone Sailor and multiple smaller scene sculptures depicting the history of the Navy. We knew these would be great for our toddlers to visit because the sculptures are easy to see and, even better, can be touched! We wanted the children to be able to recognize key features of a sailor’s uniform, the sailor’s hat, and their modes of transportation including ships, boats, submarines, and airplanes. We did a little research prior to the lesson by exploring the Navy Memorial website, reading the US Navy Alphabet Book, and speaking with a fellow teacher whose husband was in the Navy. Based on this research, we decided what characteristics of Navy sailors we wanted to focus on with the children during our classroom circle time and our community visit.

During the classroom circle time, we first read through parts of the US Navy Alphabet Book that we felt were developmentally appropriate for our age group, and highlighted the features we knew the children would see on the visit. We also allowed them to touch the images in the book. We often allow the children to touch objects in the books we read as it helps to focus their toddler wiggles. It also gives us the chance to assess if we are making the literacy connections between the word the toddlers hear and the object itself. We then showed the children two genuine Navy uniforms. We asked them to tell us what colors and other features they noticed. Answers we heard included “blue”, “white”, and “bird”.  After that, we brought out a sailor hat that they could take turns passing around the circle, which allowed them to gain a more concrete connection to the object and give them the opportunity to work on developing the social-emotional skill of taking turns. After taking turns passing the sailor’s hat, the children were ecstatic to find out that they were all getting their own sailor hats to wear on our visit!

While walking to the memorial, we modeled our thinking and wondered out loud about where we might find a sailor, how a sailor might look, and how to know if we found one. Once there, the toddlers quickly pointed out that the sailor hat on The Lone Sailor statue matched the hats their heads. We sat down in front of the statue and pulled out the US Navy Alphabet Book once more. We pointed to the objects we were seeing at the memorial that were also in the book. We asked open-ended questions including “What do you see?”, “What do you think his job is?”, and “What can you find?” Asking these questions prompted the children to look carefully at all the features of the large memorial space. One child proudly proclaimed that he had found flags that matched the flags in our book. When we could tell our toddlers were ready to move their bodies and explore more of the space, we walked them around to the smaller sculptures that were right at their eye level. This was one of the best parts of the lesson because it combined movement, careful looking, and touching. Because of this, the children spent quite a bit of time at each sculpture. They would point to features they recognized and often would name them as well. An added bonus was that it had rained earlier that day, so the boats and other features of the sculptures were wet. This really helped to make the connection that sailors are often on or near water. The children were able to put their fingers in small puddles of water that had collected on the statues and see droplets falling from the sailors’ bodies. If we redid this lesson on a sunny day, I would plan to bring water with us and use a spray bottle to talk about how water can sprays onto the boat as the sailors travel.

Overall, this lesson seemed to be a great success. We put the sailor hats out as choices in the classroom and noted that the children kept revisiting them over the next couple of weeks. We also put out My First Counting Book: Navy by Cindy Entin, which was a board book that the children could explore independently. These two things showed us that the children enjoyed learning about the sailors and helped to reinforce the connections over a long period of time. When doing this lesson in the future, we would like to add a water table with boats and submarines as an extension. We believe this extension would be especially effective because it would help the class connect the idea of water and sailors and connect well to the visit to the Navy Memorial.