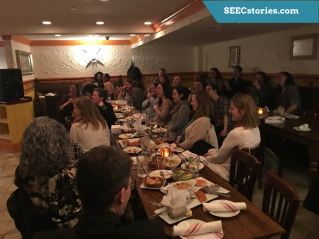 Every year, SEEC hosts a dinner in honor of its educators. This annual event takes place at a local restaurant where we enjoy food, drink, and each other’s company. In addition to the  festivities, we also use a portion of the evening to honor our faculty. This year, our center directors took a moment to individually recognize each of SEEC’s educators. Though our administrative team feels that SEEC is an amazing school because of its unique approach to learning and location on the Smithsonian campus, they also know that at the heart of this school are the amazing individuals who spend their days loving, teaching, and nurturing our students.

Once we concluded sharing about our team as a whole, a few special educators were singled out for their work. We began by recognizing Jessie Miller, the recipient of the Diane Homiak award. This award is a long-standing tradition at SEEC that recognizes the commitment, creativity, and contributions of a stellar educator. Jessie is an educator in one of our Pre-K 4 classrooms and has been teaching at SEEC since 2012.  She is originally from Norfolk, VA and completed her Master’s in Early Childhood Education at George Mason University in 2015. In numerous nominations from both current and former parents, as well as her colleagues, Jessie was singled out for the creativity she brings to the learning experiences she creates, her boundless enthusiasm and energy, her caring nature, and her ability to tap into the innate curiosity of her students in meaningful ways.

SEEC also  recognizes educators from each of its three centers who are team players. These educators were selected for their willingness to lend a hand, positive spirit, and for contributing to a strong sense of community.  Support educator, Dana Brightful was honored for her work at our preschool location at the American History Museum. Dana realized her passion for teaching young children while in college and has been part of the SEEC family since 2005. Silvana Oderisi, kindergarten teacher, was acknowledged for her work at one of our Natural History locations. Before joining SEEC, Silvana completed her Bachelors in French from George Mason University and taught as a Corps Member of Teach for America. Finally, an entire team from one of our infant classrooms was awarded the team player award for our second Natural History location: Rosalie Reyes,

All in all, we had more than 30 different educators that were nominated by families and peers this year. It was a difficult decision, but we are so proud of our team and are thrilled to be able to honor their hard work and dedication.