For our most recent book club we read and discussed Free to Learn: Why Unleashing the Instinct to Play Will Make Our Children Happier, More Self-Reliant, and Better Students for Life by Peter Gray. We were initially drawn to this book because of how it embraced play and we were excited to read, learn, and discuss teaching methods that are not often embraced by the public schools. Our book club meeting was lively and you can find a recap of our discussion below. 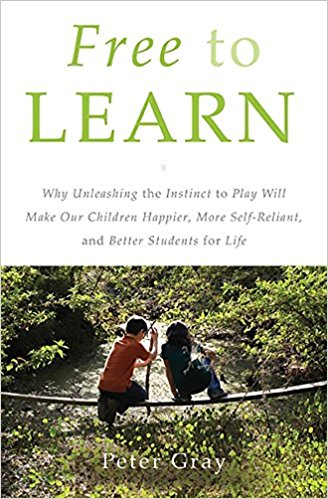 Gray describes trustful parenting as the belief that “children’s instincts can be trusted, that children who are allowed to follow their own wills will learn what they need to learn and will naturally begin to contribute … when they have the skills and maturity to do so” (26). He explains that this style of parenting has deep roots in human history and was used by our hunter-gather ancestors whose children were “allowed to spend most of their time playing and exploring freely” (28). Gray traces the decline of trustful parenting to the decline of neighborhood playgroups and the rise of fears about safety and future job employment opportunities for their children as well as the role of schools (213 – 218). Gray advocated for a resurgence of trustful parenting and argued that considering alternative schools might be a necessary step to becoming a trustful parent (226-227).

Since trustful parenting and the education system are seemingly at odds with one another. We decided to look critically at the parenting philosophy and see how if it could be adapted to a teaching philosophy that we could embrace at SEEC. In some ways, it was easy for our SEEC educators to say that they were on board with a trustful teaching philosophy. We fully embrace the importance of learning through play and exploration and believe in child-directed learning. We hesitantly agreed to the children’s use (or at least being exposed to) of adult tools, even the dangerous ones, because we believe that children learn through objects. At school, we are comfortable with children taking risks, while as educators we simultaneously try to minimize hazards. This balance between risk and hazards was what Gray was describing when he explained that children are trusted “to have enough sense to not hurt themselves” with “some limits”, such as the “poison-tipped darts or arrows (that) are kept well out of small children’s reach” (29).

There were reasons that we had difficulties embracing the philosophy of trustful parenting and therefore were unable to adequately adapt it. In many ways, being a teacher and trying to impart knowledge on a child goes against the philosophy of trustful parenting. As educators, we all felt that a crucial part of our jobs is to impart knowledge. This means that while being receptive and responsive to the children, we make lesson plans with the goal of opening their eyes to new things. We actively monitor our children to make sure that they are meeting developmental milestones and try to seek out ways to encourage growth in areas that children are not mastering by themselves. While we trust children to learn, we also hope that our children will trust us as teachers to help guide them.

While Gray mostly focused on shame used as a tool against older children, we found that this argument could be applicable to the field of early childhood education. Gray explains that using shame as a tool to entice children to perform better actually causes an increase in cheating (73). While young children are unable to cheat, they are able to lie and we know that children are much more likely to lie about a situation if they are worried that they will disappoint us. For this reason, we decided that it is crucial to look at how we are treating children when we are disciplining or redirecting their behavior.

At SEEC, we never purposefully shame children into changing their behavior. But, we wondered if there were times when we might have been shaming unknowingly. While having this discussion, we came to another question, “What is the difference between correcting and shaming?” We decided that at least one key component of trying to change a problem behavior without shaming was to describe why that behavior cannot be allowed to continue. Rather than saying “Don’t do that!”, we should say “When you hit, it hurts my body” or ask an older child to explain why that behavior cannot continue by asking them “Is that hurting someone?”. These are pillars of SEEC’s behavior management philosophy and we feel comfortable using them. After reading Free to Learn and thinking deeply about the role of shame in discipline, we left the discussion unable to draw a distinct line between correcting and shaming. In the end, we decided that we all needed to go back to our practices and be mindful of this topic.

Much of Free to Learn is a description and study of the Sudbury Valley School. Gray explains that to “visualize the Sudbury Valley School, you have to set aside all of your notions of what traditional schools look like, including your notions of what progressive versions of traditional schools look like” (88). We found this statement to be true. Sudbury valley is indeed “something entirely different” (88). The Sudbury Valley School is founded on the belief that the students, as a democracy, run the school and are in charge of their education. Staff members, which there are very few of, are not called teachers “because they recognize that students learn more from one another” (90 – 91) and must be reelected by the students yearly to keep their positions (90). Children are able to explore the entire campus whenever they want, do not have grades or tests, and do not have to join a single class. The principle tenet of the Sudbury Valley School is that “each person is responsible for his or her own education” (91).

In some ways, the Sudbury Valley School was almost impossible to compare to other schools. As a group we found this both frustrating and enlightening. It was frustrating because so many of the practices highlighted seemed impossible to adapt to other schools, particularly public schools. We discussed how some public schools want to be progressive, but testing and pressure make it impossible. The pressure on schools, teachers, and students is so overwhelming that no one is willing to experiment or try new educational methods. This problem also extends past discouraging teachers from experimenting with new educational methods. It was recently discovered that D.C. public schools graduated more than 900 students who had not earned their graduation last year. With this need to push children through the school system, rather than considering their needs, how can schools be expected to take a gamble and embrace such extreme teaching alternatives?

Ways to Incorporate Ideas at SEEC

At SEEC, we are lucky to be able to discuss concepts, adapt them, and implement them in our own ways. Even though our student population is under the age of six, we value their voices. Students as young as two years old regularly hold votes about what the class should learn about next. At the beginning of the school year, our four-year-old classes create a class contract, which explains the rules of the room, and the teachers and students sign it. We are able to embrace democracy within limits and still give each child a voice.

We believe that children are constantly learning from each other. Rather than try to solve disputes, we give children the words to create their own solutions. For example, if two children are fighting over a shovel, we could say, “It is Sally’s turn for five minutes and then it is Jose’s turn for five minutes”. Rather than forcing a teacher directed solution in that manner, we say “I see there is problem here. What should we do to fix it?” The children may very well choose a five minute on, five minute off solution, or they may decide that Jose should play with it because he is wearing blue shoes and the shovel is also blue. So long as both children agree, a SEEC teacher will happily accept this solution. We believe that when children are given the freedom to learn from each other, they learn critical thinking and real life skills. Our goal is to help children discover these skills and grow to love learning.

While we were unable to incorporate all the things that Gray advocated for in Free to Learn, we were able to have a vibrant discussion on the book. In the end, we valued Gray’s embrace of learning through play but advocated that thoughtful educators can have a meaningful place in a young child’s learning.

One thought on “Book Club: Free to Learn”