While yes and no questions are often criticized for shutting down dialogue and limiting possible answers, we have found that there is the potential for these types of questions to do the exact opposite. For the newest speakers, answering yes or no questions gives them the opportunity to say what is on their minds without being limited by their small vocabulary. Children’s ability to understand language, their receptive language, develops before their ability to fully speak. Educators can ask complex questions which the children can comprehend but do not have the ability to answer.

Yet, young children want to be part of the conversation; they want for their voices to be heard and to have the potential to impact the discussion. Asking yes or no questions can give children the ability to enter the conversation. A skilled educator can ask a question that has a definitive answer but respond in such a way that allows for responsive conversation to occur. Take this example from our toddler room:

Educator: “Where are the cockatoos?”

Toddler: Points to a cockatoo

Educator: “Where’s the other cockatoo?”

Toddler: Points to an owl

Toddler: Points to the owl

Toddler: Points to a different owl

Toddler: Points to an owl again

While the educator started by asking a closed question, she was flexible when accepting the toddler’s response. After confirming that the child wanted to discuss owls, rather than cockatoos, she responded in a manner that showed that she valued the child’s voice. In the end, both educator and child were able to communicate about the sounds owls make. This conversation began by asking a question with a correct and definitive answer, but rather than limiting the discussion, it actually served as an invitation for the toddler to join and shape the conversation. Using questions with definitive answers to check knowledge can actually lead to a deeper and more meaningful conversation. At the beginning of the conversation or when new information is introduced it can be helpful to take a pause and ask a yes or no question to make sure that the class is processing the information correctly. This lets the educator know if they need to provide more or less context before moving on. While we believe that the best way to learn is to discover and create meaning, it can be helpful to do a quick and simple check of knowledge by asking yes or no questions.

At SEEC, we try to be careful when doing this check for knowledge. We do not want to make children feel as though they are wrong, incorrect, or that their voice does not matter. So we use specific phrases such as the ones below:

“I see why you might think that the whale is a shark, but the blue whale is much larger than a shark. Let’s take a closer look and see.”

That can be confusing …

“The letters b and d can be confusing. They have similar shapes with a long line and a half circle, but they point in different directions.”

Oh that reminds you of …

“Oh, hockey reminds you of soccer? I can see why. Both are team sports, but hockey is played on ice and soccer is played on a field. Let’s see if we can spot other differences together.”

In general, our goal in testing knowledge is not to correct, but rather to explain more or in different ways so that the children have an understanding of the basic principles before moving on. 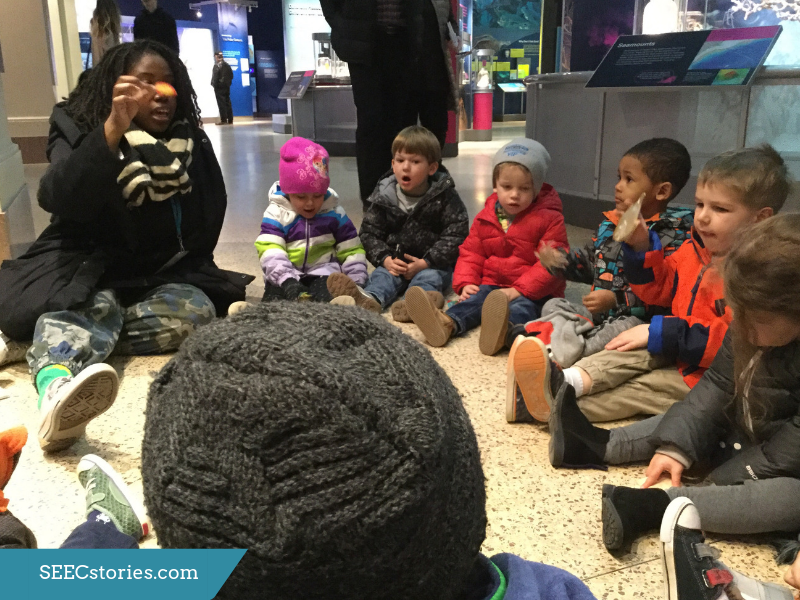 Young children who are new talkers love saying yes or no. They will emphatically shake their head up and down while saying “Yes! Yes! Yes!” or they will stomp their foot on the ground while declaring “No!” Asking yes or no questions with a group of toddlers can be a great way to get the class excited about something.

There can also be a social element to asking yes or no questions that can be particularly powerful for young children who are also developing a growing awareness of their peers. They like watching and copying other children. Educators can harness this by asking yes or no questions to the group and then encouraging the class to become excited about the choice as a group.

While there is certainly good reason for valuing open-ended questions, it is our experience that questions with a definitive answer have a place, especially in the early childhood classroom. Ultimately though, these questions must be responded to in a way that acknowledges the child’s interest and leads to further exploration and thus, understanding.

SEEC will be hosting an educator workshop entitled Fostering Wonder on January 17th.

Please join us to think more about questions and curiosity in the early childhood classroom.