This week we are featuring Melinda Bernsdorf. Her toddler classroom was learning about opposites and decided to spend a week learning about the sun and the moon. Below you will find a reflection from Melinda and images from her lesson on the moon.

In our classroom, we have been talking about opposites. This week, we looked at day and night, something very familiar to the kids, and discussed the differences between these two concepts. We talked about the noticeable differences in the level of light, and the different objects we see in the sky during day and night. We started in the atrium of the National Museum of the American Indian. There is a large skylight that has metal work resembling a sun which lets sunlight shine into the space. There is also a set of prisms, and as the outside light shines through, rainbows move across the walls. We then looked at the amazing star scape on the ceiling of Our Universes in the National Museum of the American Indian. To focus our attention, we brought “telescopes” we made earlier in the week, and found shapes in the stars. To deepen our discussion on the moon, we talked about the texture of the surface, and each child was able to imprint their own Styrofoam moon with finger shaped craters. We also talked about how our actions are different in the day and night. There was lots of discussion about sleep and play.

Exploring opposites is always a great way to involve our kids in scientific discovery and early math skills. I want the kids to become more familiar with the vocabulary on these subjects. We compare and contrast, and talk about observation and investigation. In this lesson, I wanted to bring the attention of the children to a more complex conversation about an everyday experience. I also wanted them to have a great immersive experience, reading about the sun and brightness in the atrium where they could see it shining through the prisms, casting rainbows on the walls, as well as talking about the moon and stars while sitting with “telescopes” under a night sky.

The kids really enjoyed the telescopes. They recognized their work from earlier in the week and felt a sense of ownership and pride as their art project became a tool. They focused on the stars and moon longer when using the telescopes, and having a tactile object that related to the lesson helped lengthen their attention span.

Trying to extend our lesson with the Styrofoam moon would have worked better in the classroom. I was hoping for an art activity that would lend itself well to the museum environment, however I ended up asking toddlers to sit for too long. Between the time in the atrium and then the time under the stars, we became a bit antsy. When I attempt this lesson again, I think we might talk a little more about the moon and its surface on a different day. I would also like to expand this project by having the kids paint the newly-cratered surfaces of their Styrofoam moons with a mud or clay based liquid, and decorate the other side of the Styrofoam with orange and yellow tissue paper. This will give them a tactile object that represents both the moon and the sun. Like the telescopes, these could be made ahead, and brought with us to the museum to bring both aspects of the lesson together.

Here are a few images from their unit on opposites:

Melinda took the group straight to the National Museum of the American Indian for their lesson. When they first pulled into the museum she had the group stop and observe the light coming from the ceiling portal.

Melinda then showed the group an image of the sun and asked them to compare it to the light that was coming out of the portal. They talked about the shape and the amount of light they could see. 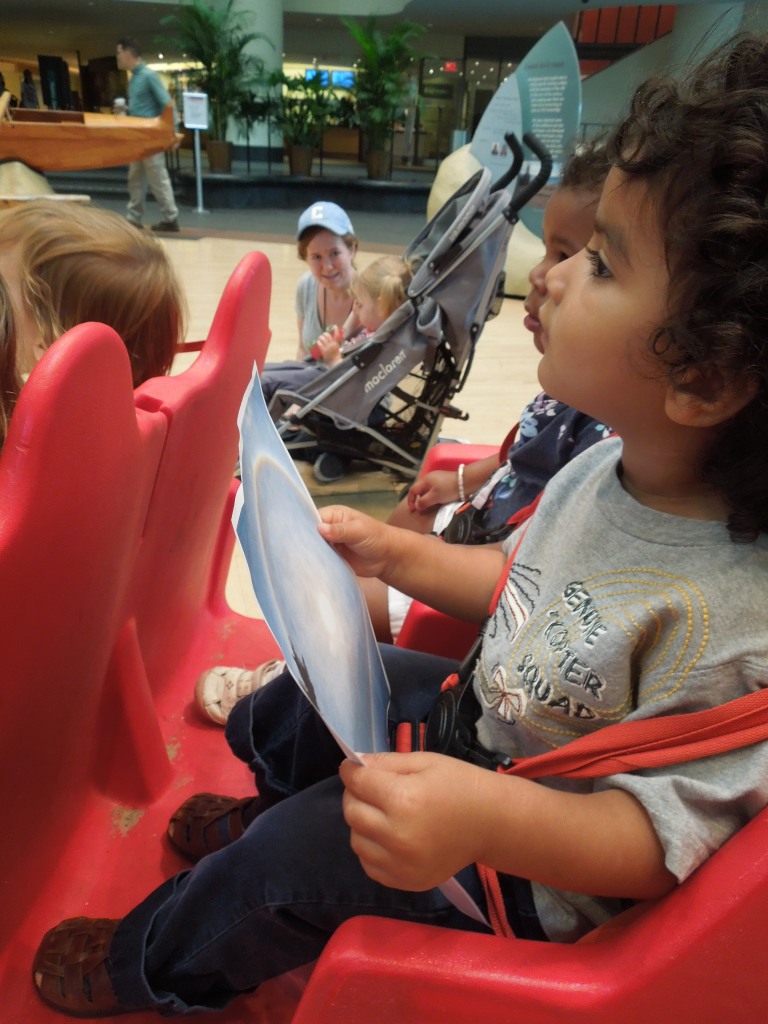 Melinda gave each child the chance to look closely at the image.

She also referenced a book they had read earlier in the week about the sun.

They then headed up to the Our Universes exhibit. The ceiling of the exhibit has a moon and is covered in stars. Melinda passed out telescopes that the children had made to help them look closely at the night sky. While the children were looking, Melinda read them Moon Game by Frank Asch.

The group loved looking closely at the book through their telescopes.

Melinda then shared with the group an image of the moon and styrafoam circle. She talked about how the moon is covered in craters and that they were going to use their fingers to squish the foam and make their own craters. 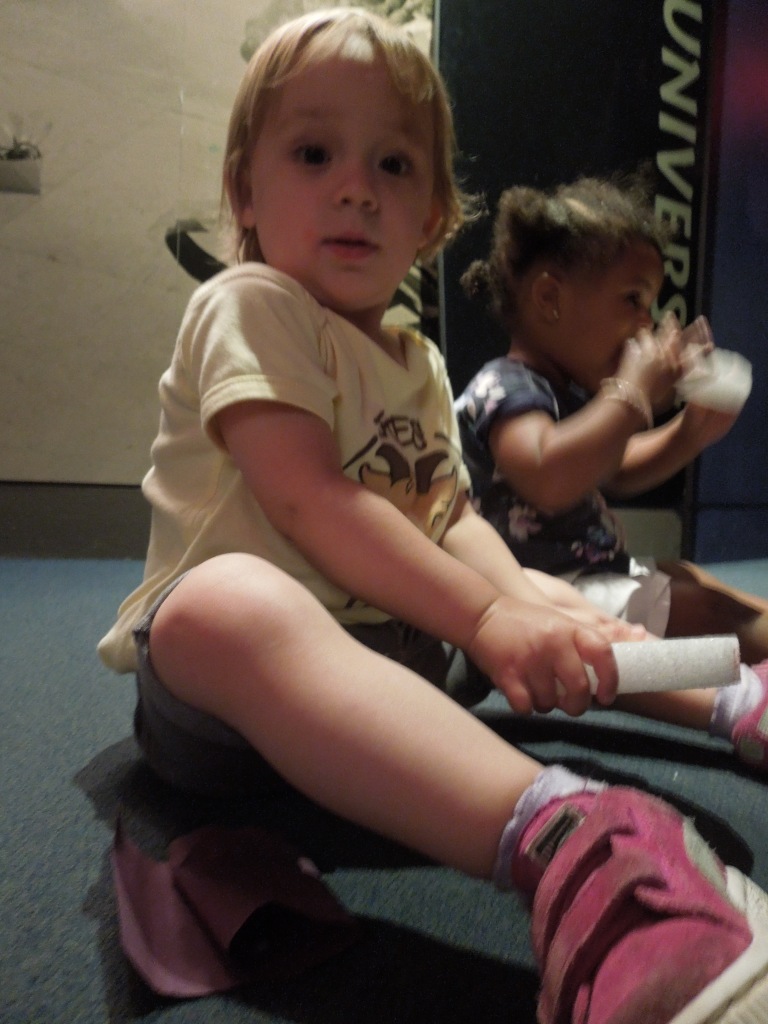 They enjoyed the sensation of the foam squish beneath their fingers. 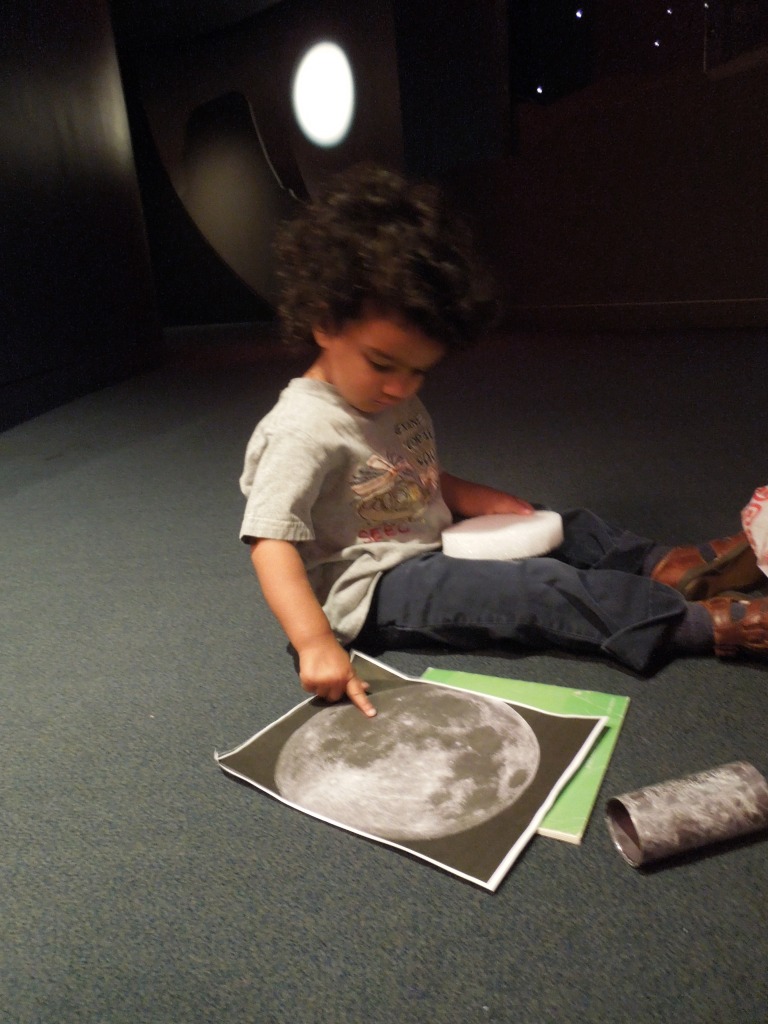 One little girl especially liked comparing her circle to the moon.

Melinda also had the group look at the House Post from the Dís hít (Moonhouse) of the Kwac’kwan Clan. She pointed out the circle shape and how the carved image on each post could reflect the different phases of the moon.

They took one final look at the sun coming through the portal and compared the two images of the sun and moon before heading back to the classroom.

This class had a wonderful time learning about opposites! Be sure to check back for our Teacher Feature next week!