“Bang, bang. Got you!” Have you ever heard these words on the playground? Even though many adults are uncomfortable with children engaging in weapon play, it happens regardless. Recently, our school has been discussing whether weapon play should be allowed, and if so, with what parameters. As our executive director, Meredith McMahon, put it, we need to consider three key perspectives when making this decision: what is developmentally appropriate for the children, what the expectations are in their future schools, and what is currently happening within our larger society.  Balancing these three considerations and the multiple perspectives of faculty and families has made this a difficult topic to navigate.

While it can be jarring for an adult (especially those who have been affected by gun violence, as some of our SEEC community has) to see a child pretend to shoot a peer, children do not have as much life experience as adults and therefore do not fully understand the complexities of weapon play. For example, while school administrators in North Carolina saw a five-year-old turn a stick into a gun and threaten to shoot and kill her classmates, the five-year-old in question saw herself playing an imaginary game in which she pretended to be a castle guard and defended her friends, the king and queen. Children often see their favorite super heroes or movie characters using weapons, both real and imaginary. For a child whose entire lived experience is fodder for their play, it can be hard for them to understand why guns, lightsabers and swords are off limits.

In our experience, simply saying no to all weapon play, especially without an explanation to why it is being disallowed, will do little to stop the play. Instead, children might become more effective at hiding this kind of play. As one faculty member said, “They’re still going to do it, they’re just going to do it behind your back. It takes away from your relationship and ability to guide them through it and lead them to best practices in playing it.”

Research has also shown that there is no correlation between weapon play as a child and later weapon use, but instead is linked to higher social competencies. Weapon play is just one facet of a child’s play and through it children can learn communication and problem-solving skills as well as develop their imaginations. For example, one of our preschool educators shared a recent experience with her class on the playground in which the children were pretending to shoot things. She asked what they were doing and they told her that they were using bubble blasters to trap bugs, specifically mosquitoes. They began going around the playground together looking for bugs and pretending to trap them or blast them away so they wouldn’t get bitten.

While we at SEEC can discuss and commit to a stance on weapon play, we recognize that our students will eventually leave SEEC and attend a school whose rules around weapon play will most likely be different. In recent years, many news stories have emerged detailing how young children have been suspended for engaging in weapon play, or simply drawing a weapon to accompany their drawings. We want to ensure we are preparing our students for the next step in their academic career, which means preparing them for expectations in their elementary schools.

As our older children get ready to make this transition, our faculty discusses what they can expect going to a new school; that some rules that they have at SEEC may stay the same, and some may be different. We’ve been including weapon play in this discussion, however one PreK-4 educator expressed concern that a child could leave before these conversations take place (due to a family move, etc.) and that we will not have prepared them fully. 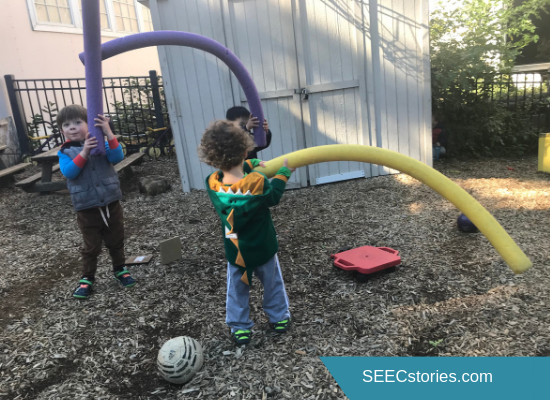 The current climate in the country and world is not something to be taken lightly. As one faculty member pointed out, children hear and see images related to weapon violence through the media, whether it be in passing on the news, the radio or on the cover of newspapers, books, and websites. Mass shootings and police shootings of unarmed citizens are an all too common reality in our country. People of color are disproportionately affected by these killings, making these occurrences not only disturbing, but a social justice issue. At school, we also have active shooter drills, in which the children hear the language “there has been an active shooter reported in the building,” while we practice hiding. To think our children are not absorbing weapon related images is naïve and to ignore how the current state of the country affects them and their future is irresponsible.  At our most recent meeting, several of our team thought broadly saying, “What kind of voice do we want our school to be? Weapon play is important, but we’re impacting these children’s lives every day and I would love our world to be less violent.” Another said, “This is a hard topic without one clear answer, but what are we doing, proactively, to promote peace and foster a culture that values that?”

No matter what our final decision may be, our team is committed to creating language around this topic to use with the children (similar to our current “SEEC Speak”). Communicating our reasoning and intentions with families is also imperative to ensure continued open lines of communication as questions and concerns arise. Our book club is also planning to read Killing Monsters: Why Children Need Fantasy, Super Heroes, and Make-Believe Violence by Gerard Jones for our next meeting to further our understanding on this complex topic.

What are your thoughts? Please share in the comments below!